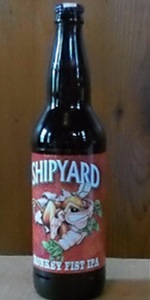 This is a great IPA. The monkey just hit me in the face with his fist. It pours into a nice golden glowing liquid with a frothy white foamy top. The froth doesn’t go away. This drinks a little hoppy so it’s not a fast crusher but it for sure is delicious. A good option if you want something hoppy.

Orange golden with a light haze, moderate carbonation and a finger of beige head.

Almost looks like a lager, or an american pale ale with how it pours. Very thick tall head and superb lacing. Hints of malt. Brown amber look with haze. I poured mine from a can. Overall not bad but not my favorite.
Now that I read some other reviews, I do get some wood flavor. But dont know about people saying its sweet or tropical.

12 Oz Bottle poured into glass
Look - Gold amber color with a medium foam head and some minor glass lacing
Smell - Very sweet and tropical, papaya, sugar cubes, pineapple, and resin.
Taste - Kind of sour upfront which is unusual for an IPA. Similar to the aroma with the tropical fruity hops except a lot more bitter grapefruit. The finish is somewhat bitter and woody. There's no information on the label as to how this is made and if it is bottle conditioned. It seems rather raw like it hasn't been filtered but not sure about that. Carbonation is medium-high.

Overall, there are certainly worse IPA's. I give my honest opinion of all beers without any biases but I have yet to have a beer from Shipyard that was exceptional or stood out in a good way. Grade is a B

And now, at last, the CANmulnation of the past few days' brewery horizontal that began on New Shipyard Beer Sunday (Week 672), an entry for The CANQuest (tm)! For those not in the know, a Monkey Fist is a chunk of lead around which clothesline is wrapped in a very specific way & then tied to a ship's mooring line to heave to the awaiting pier line handling team so that they can pull the much heavier mooring line from the ship to the pier. I spent over a year-and-a-half in the U.S.S. Fulton's (AS-11) Deck Department, watching as the Boatswain's (Bosuns) Mates made these things. Some people were really good & fast in their manufacture!

From the CAN: "India Pale Ale".

I was anxious for the Crack!, but given that this was a 16-fl. oz. Pint CAN, there was no ChANce of an inverted Glug. Instead, I just let it slowly Glug into the awaiting glass, forming two fingers of dense, rocky, foamy, tawny head with good retention all on its own. It left some great lacing in its wake & now I was ready to drink. Color was Deep Amber/Light Copper to Copper (SRM = > 13, < 17) with NE-quality clarity. Nose had a pronounced earthiness, almost as though this were a wet/fresh hop IPA. It was very much a malt-driven version of the style, so English IPA would be fitting. It was lightly citrusy with a lemony quality that made it all very evocative of tea. Mouthfeel suffered from the Shipyard blues since it was rather thin, a quality that I noticed in all of their beers of the past couple/few days. The taste was very earthy, slightly bitter, very tea-like. Finish was dry, but earthy & made for a very mellow finish to this horizontal. I understand from their website that they are revisiting & tweaking the recipe on this beer, so it may be ChANging in the near future. In the interim, I enjoyed it as is.

One of those beers that I turned to after a big, boozy, unruly stout to refresh my palate and coax it back to life. And coax it did. Also one of those beers where you see the score and think - the BA community is one of discernible drinkers. That's a tough score right there.

Anyhoooow - drank straight from the bottle so assuming it looks nice (golden with a decent head?). Smell is more floral than piney, more malty than fruit-forward...and that's just fine. Pine, grapefruit shavings, hit of orange rind. Toasted malts beneath it all.

Subtle kick of alcohol warmth seals the deal and precedes a slightly watery finish. No lingering bitterness which would have been nice. Solid beer.

Decanted from a 12 oz (355 ml) bottle into a Weissbier glass; bottled on July 3, 2017 (but refrigerated since purchase).
A: Pours a cloudy orange amber with a one inch egg shell white head, good retention, and strong lacing.
S: Floral and fruity. Aromas of grapefruit and orange mingled with medium roast maltiness.
T: Citrus and spice flavors blend nicely with a white peppery bitterness.
M: Medium bodied with robust carbonation. Light bitter aftertaste.
O: This is a very nicely crafted IPA. To the eye, it more the NEIPA, and to the palate, more a WCIPA, but it certainly was enjoyable.

Pours dark orange caramel, ok scent but muddled, tastes a bit rough, bitter is to aggressive, malt is nice. Mouthfeel is thick, not what I want in an IPA.,

My kind of IPA. More like the West Coast style such as Stone and Lagunitas, but made in ME. Good bitter finish, nice citrus hints, good feel leaving you wanting more. I am sure I this will dehydrate me like Stone does, which is good for my BP and another good reason to open one more....

Appearance: amber colored and lively. The beer was cloudy and had a brown tint.

Smell: sweet, herbal like smell. Very per-fumy and you can tell right away when you pour it into the glass.

Overall: I enjoyed the beer but would not drink this regularly. It was too fruity for me in terms of an IPA. Still, worth trying and buying every now and then.

Pours an amber color with a strong, bitter smell and a quickly dissipating head. The taste is very earthy and bitter, with some hints of pine. It's a low-carbonated beer.

On tap at Bonnie & Reed's in Hollywood Beach. Piney and dank with lots of hop presence - nice drinking. Paired well with a blackened mahi sandwich and fries.

A - Pours an orange copper colour with a hint of haze. About a finger of off-white head that dissipated fairly quickly but leaves plenty of lacing.
S - Dry, hoppy notes up front, pine, malts, hints of citrus. Barely detectable smell of alcohol.
T - Mild hop bitterness, pine and resin, citrus. Very easy-drinking for an IPA.
M - Lively carbonation, medium-sized bubbles that wake up the tastebuds.
O - A decent lively IPA that doesn't push the envelope.

A-Orange-brown in color with an off white head that is basically non existent
S-Subtle caramel, and mostly malt aroma, I cannot detect any hop besides perhaps Columbus
M-The mouthfeel on this one is light, carbonation is also light
T-Nice balance of sweetness and bitterness, with a slight peppery aftertaste. I also get a little stone fruit flavour, peach, plum and maybe even raisin
O-This is a decent IPA that could be contented as too bitter if it were an attempt at a crowd pleaser

Pours a hazy, amber coloured body with a yellowish foamy head that pops up and down like cumulus clouds. The scent is heavy in pine and slight citrus rind, in particular, grapefruit and lemon. The taste is quite boldly bitter, with little notes of citrus coming through here and there, though not overpoweringly, as expected from an English IPA. The finish is smooth, with long-lasting freshness. This certainly wins the contest in terms of English IPAs for me.

In the New England trending toward English style IPA.

S: Even at cask temperature, too laid back with first caramel malts, then piney hops providing a citrus and earthy feel.

Pours orange-red. Smells malty and hoppy. Tastes like caramel malts and tangerine grapefruit citrus hops. Slightly herbal and pretty malty. This is an unbalanced IPA that I appreciate, because it has just the right amount of hops to balance out the malty sweetness. One of my favorite Shipyard beers.

Dark copper out of the bottle. This is a throwback beer in many ways. Piney hops on the nose with some citrus notes, definitely English in style with a stronger malt presence than what has become the standard in IPA's today. Not much to speak of in terms of head or lacing. The major fault with this beer is that it's not as balanced as it could be; which is a trademark of the EIPA. The malt and hops do not so much compliment one another as they do battle for dominance.

A- Pours an Orangey Red colour (think cedar) topped by a 3 finger head that quickly dissipates to a think skim. Tons of lacing on the glass.

O- One of the better beers I've had from Shipyard.

Great IPA with a just right abv. I drink it in 32oz frozen mugs at Codys in Clearwater Fl...$2.50 a full pint! Love the look. Flavor, smell, hops, citrus flavors with a nice thick head that settles to a light rim for the entire time of your drink. Love this IPA but there are others out there that are better but the abv keeps you from drinking several and you if course pay more.

A - cloudy body of deep orange under a 2-finger khaki head; nice lace

S - citrus and a touch of pine

O - I would call this an average IPA.

Monkey Fist from Shipyard Brewing Company
Beer rating: 78 out of 100 with 1106 ratings