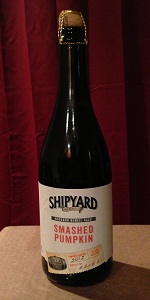 I'm not certain if this was infected, but there's a tart funk in this brew that I haven't noticed in Smashed Pumpkin.

It has a similar appearance, if a bit more viscous and weighty. Aromas of sour apple, cinnamon, oak, honey and lot hot booze. Booze at the front of the palate as well, strong, and that sour fruit aspect I'm not sure was intended. Long, sweet finish.

I'm going to have to try this again, I think I got a funked bottle. I wasn't picking nuances of vanilla and caramel typical of bourbon barrel-aging. Interestingly, it doesn't taste all that bad (although I usually don't mind slightly infected barrel-aged brews).

A- Pours a dark orange hue. Body has a uniform translucency. Pours with a very small soapy head that immediately fades to a thin collar. Very little lacing is left behind in the glass.

T- Bourbon flavors are the highlight upfront with a soft pumpkin and somewhat prominent woody backbone. The finish highlights nutmeg and cinnamon with a touch of honey and a touch of alcohol astringency. Lingering is a hint of spice and a big alcohol warmth.

M- Low, but very tingly carbonation that fades quickly. Body is medium weight and slightly sticky with bourbon and honey, yet slightly bland.

O- Overall this is a nice pumpkin ale that really highlights bourbon barrel aging. I would say the bourbon characteristic are the most forward, followed by honey and pumpkin, and subtle barrel. It is a big boozy tastefully crafted pumpkin.

Pours a slightly hazy orange amber color with a smallish white head that quickly dissipates to a cap. Smells of bourbon and oak with a huge hit of pie spices and a bit of malty caramel. Hop aroma, well I can't find any behind the pungent nutmeg and allspice. The flavor is actually kind of complex. Sweet sugary malt with a bit of alcohol, some oaky vanilla, a hint of bourbon and a shit ton of pie spices. Long lingering sweet spicy flavor long after each sip. Medium body with a moderate level of carbonation and a sugary spicy mouthfeel. To be honest I have no idea what possessed me to pick up this bottle as I normally despise Shipyard beers. Well color me pleasantly surprised by this beer! The sweet malt the spice and the bourbon treatment just really seem to work with this beer.

2013 edition of this one, says 12% on the bottle....
not much head, heavy looking brown-orange liquid with an equally heavy spice aroma from the top. repeated smells give a very sweet, pumpkin-pie filling aroma with slight vanilla, whip cream (YES! it smells like whip cream!), and maybe a tad of bourbon in the distance.... nice consistent lacing/covering on the side...
first sip.... 'manufactured' spice taste with expected bitterness from the chemical-taste... some genuine spice, nutmeg, vanilla, pumpkin, cinnamon.... and yes, of course, even a little bit of whip cream. is that possible? is this even possible at 12% ??
I have to admit I have never liked a 'pumpkin' before. it was always a kind of novelty beer to me. but this is AWESOME! this is different. admittedly, I DID get that chemically-altered-for-taste kind of smell and flavor at the beginning, but either my taste buds quickly accommodated and adjusted or I might have been off. but the following smells and tastes are genuine flavors and this is very delicious. I swear it is a luscious, creamy pumpkin pie with a nice buttery bread crust and thick whipped cream topping. can almost get vanilla ice cream in there also. now, this is sweeter than a regular brew, and I suppose that may qualify it as a novelty, or you can say that it's from the higher malt quantity which is giving it such a high abv and is sweeter as are most higher abv brews.... either way, I don't wanna go off track with a novelty. but this is WAY better than I anticipated. i'm not really sure why I even purchased this except it was a recommendation.... and I am pleasantly surprised. I couldn't drink more than this one bomber though. i'll need to change it up for my next one.... the high ratings are for its category; not for an overall rating. I think it's fair to rate this compared to its peers as opposed to rating it against all the major leaguers in general.... as i'm winding down to the last of the bottle, the sweetness is beginning to dominate. that was interesting. now back to something less sweet and yummy. something like a . . . . . Sucaba? is that one any good?

So it is a few months past season but the pour is still very attractive copper-orange with the soft, silky off-white to tannish head that sits on top the whole time. Nice clarity.

On the nose I am getting plenty of malts and pumpkin spice and a bit more booze than I might have hoped for.

The body is full and creamy.

The taste is also fairly boozy like the aroma with the pumpkin spice up first and the bourbon in the batter's box. It is too bad it was more like hard liquor than a pumpkin ale but that might have been due to the amount of time that passed since this was bottled.

Presentation: 750 mL corked and caged bottle from 2012. Bottle 01492. Poured from the bottle into a tulip glass. Served slightly chilled.

Appearance: Dark orange to medium brown in color. A very light beige lacing that forms around the edges.

Aroma: Big cinnamon and nutmeg upfront clashes with the bourbon and a pretty noticable alcohol aroma. The barrel notes are not completely integrated at this point. Some subtle vanilla and pumpkin notes are there as well. Much more spice forward than I remember the base beer.

Taste: Still has a big spice note, like the aroma, but the barrel seems more evenly integrated. Nice combination of cinnamon, nutmeg, clove and allspice lends an interesting spice note. Some caramel and a touch of butter from the base beer. Bourbon and vanilla notes provide some complexity and added heat.

Mouthfeel: Full bodied with a nice bit of carbonation.

Overall, I like this beer, but it still feels far too hot. The barrel is clearly not fully integrated yet and the final beer feels hot. Still despite all the flaws here, I am still enjoying the beer. Perhaps some time would do this well. Right now, it is too hot and unbalanced.

This is the 2014 edition. Murky and the color of unfiltered cider with a brief flicker of foam.

The first sip tells the story-- this is one of the wierdest beers you will ever hope to taste. It's exactly like a Mexican candy, the big chunks of fruitlike stuff bristling with chrystalized sugar. The squash flavor comes through in the aftertaste. I think this was aged in a fruitcake instead of a barrel. There is a touch of something boozy, followed by a hot alcohol rush. Welcome to the monkey house!

From the 750 ml bottle purchased at Coit Liquors in San Francisco. I could of had a couple of six packs of very tasty craft beer for the price of this concoction.