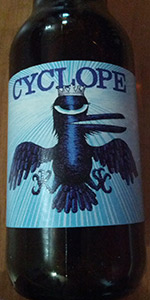 Reviewed by PascalMotard from Canada (QC)

Reviewed by MaltyPythonsHopCircus from Canada (BC)

Reviewed by CanadianBacon from Canada (QC)

4.01/5  rDev +2.8%
look: 3.75 | smell: 4.5 | taste: 3.75 | feel: 4 | overall: 4
Appearance - poured from a 341ML (11.5oz) bottle into a Teku Glass. The beer pours a really nice cloudy golden orange color, very similar to the look of tangerine juice, it has a bubbly 1.5 fingers of off white head that faded really fast although it does leave thick lacing and the carbonation seems fairly strong! as far as appearance goes, it lost points because of the dull head. but still a decent looking beer.

Aroma - This is a juice bomb! I will say that before I even start. it was brewed with Mosaic and lemondrop hops and the nose is citrusy. I get mango, pineapple orange peel lemon rind you name it this is a fruit juice. Subtly behind the juice you get a soft yet sweet caramel similar to werthers originals and a very light saltine cracker.

Taste - The taste profile changes a little bit, It is still citrusy upfront but the orange peel and grapefruit seem to be prevailent these are followed by dry earthy hops and make the flavor much dryer than the nose suggested. The sweetness from the caramel is gone as well and replaced by a grainy malt taste. I find the nose more appealing than the taste however only slightly, Althought not what I was expecting it's still well made!

Feel - This beer has a rather light mouthfeel with strong fizzy carbonation. As stated in the Taste section there is a dryness to it and it goes down fairly smooth. It definitely fits the flavor profile of the beer!

Overall - The first time I had this I remembered it being much better than this and the aroma led me to believe it was. I don't know it its just because this bottle had a couple weeks more age and may have passed a threshold but I doubt that is the case. It is still a really good beer just not the beer I was expecting. The flavor was dank and earthy with a dryness, it is light and smooth but prickles the tongue. If you can find a fresh bottle try it!

Rated by ViennaSausage from Canada (NL)

L: A clear light golden color with a slight hint of red hue. Good two finger head with fine bubbles that dissipates somewhat, but holds together throughout the experience. The head seems almost "belgian" like in consistency.

T: A significant amount of hop bitterness with some, but minimal amounts of sweetness (relatively dry).

Overall: This is a great IPA with an amazing hoppy nose paired with an assertive level of bitterness.

Rated by papat444 from Canada (QC)

3.75/5  rDev -3.8%
look: 3.75 | smell: 3.75 | taste: 3.75 | feel: 3.75 | overall: 3.75
Bottle: Poured a golden color ale with a nice white foamy head with good retention and some lacing. Aroma of citrus and light lemon notes is quite pleasant with nice floral notes. Taste is mostly dominated by fresh citrus notes with light cereal notes. Body is about average with good carbonation. I was expecting the hops to stand out even more than they did but still an enjoyable beer.
Jun 01, 2015

Rated by Niceroad77 from Canada (BC)