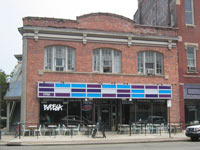 Rated by Cynic-ale from Texas

4.4/5  rDev +3.3%
vibe: 4.5 | quality: 4.25 | service: 4.5 | selection: 4.5 | food: 4.25
What I had: Green Flash Palate Wrecker DIPA and Victory Prima Pils on tap, white wine and cocktail for my girl.
What I liked: Ridiculous draught and bottle lists, bartender was spot on with her recommendations and happy to provide samples, managed to find seats right away despite it being super busy, cozy bar with chalkboard in plain view, good college crowd, really fun vibe on a Saturday night, love the Mikey’s Slice joint right next door.
What I disliked: Certainly attracts some hipster types but we didn’t feel out of place here.
Would I go back? For sure.
Overall Rating: 88

Reviewed by Zonk from New Jersey

Reviewed by MRJAZZ from Virginia

4.68/5  rDev +9.9%
vibe: 4.5 | quality: 4.5 | service: 4.75 | selection: 4.75 | food: 5
Went to this location while in town for my nephew's wedding. Was motivated by the BA review.
Must have gone to almost 15 places during my weeks visit to the Capital city. This was my overall # 1 place in the Capital City. Went there three times, and every time was great !
Ambiance, Beer selection, personnel and cuisine were superb. Only complaint: the Din gets to be very loud on busy days. Superb Facility !

4.14/5  rDev -2.8%
vibe: 4 | quality: 4.25 | service: 4.25 | selection: 4 | food: 4
Have been here a couple of times, once in the early afternoon with my son and once for dinner with a buddy, both visits have been very enjoyable. First time was just there for the beer. They have a really great selection, a lot of good brews that are a bit out of the mainstream in terms of similar selections say at a Yardhouse or similar establishment. If you are a real craft beer hound a definite place to stop. Wait staff was knowledgeable and friendly and prompt; all good things. Second time came for dinner and beer; once again great beer selection and some great suggestions from our waitress. I was pleasantly surprised by how good the food was. From a price standpoint not disappointed at all felt there was value for the dollar.
Sep 25, 2013

4.91/5  rDev +15.3%
vibe: 4.75 | quality: 5 | service: 4.75 | selection: 5 | food: 5
I was on a biz trip to Columbus - my 1st visit there- and made the impressive discovery of the Short North and this superb establishment. I consider a trip to be a resounding accomplishment when uncovering a place like this one; it's like a crowning achievement and Bodega provided me such a experience. I was there on a very busy Friday and after a brief wait, landed a seat at the bar and made my way through Bodega's rich and deep beer list. There are too many to list here; let's just say if you can't find a suitable pint among their offerings, you never will anywhere else. I had Great Lakes' outstanding Monster and several from Michigan's Dark Horse: the Crooked IPA with Citra and the FF Eert Dekoorc. Splendid in all respects. From the food menu, I opted for their Chef's Salad, which was a very tasty and inventive concoction of strawberries, blueberries and walnut in a citrus dressing. The service and staff are both beer-centric and friendly; I can't wait until my return trip to Columbus which will certainly include a stop @ Bodega!
May 25, 2013

Reviewed by apasternak from District of Columbia

4.81/5  rDev +12.9%
vibe: 5 | quality: 5 | service: 4.25 | selection: 5 | food: 5
Walked in late one Saturday night when bar hopping around the Short North. I was with a roommate and my girlfriend, and we found a table right away. I split a bottle of Chimay Red with my roommate, which was fantastic as always, though a little pricey. We ordered food, which considering this was towards the end of our crawl, was much needed. The nachos were excellent and the spinach dip was also good, despite my general dislike for the dish. Good food, good atmosphere and good booze. It was a good time.
Apr 04, 2013

Reviewed by Chrysostom from Ohio

3.54/5  rDev -16.9%
vibe: 4 | quality: 4.25 | service: 2 | selection: 4.25 | food: 3
I was here for five or six hours the other day. The atmosphere is generally good, a little hipster-y, but the place becomes packed to the hilt after about 9:00 PM. No music or dance when I was there, which is a plus for me - I think they may have turned some on later in the night, I'm not sure. The patrons run the gamut from young hipsters to business travelers, and are uniformly interesting. Good beer requires good conversation.

Quality in beer is extraordinarily high, with reduction only for the lack of glassware (only about four different kinds) and the lack of a good high-end scotch selection (Obad 14 was the oldest and best scotch they had). Quality of food is moderate - it's not bad, but is a very small selection, not even covering all of the bases of typical pub fare (limited to chicken wings and sandwiches, pretty much) - and overpriced. Other gastropubs/food pubs do a much better job with the food, but this is primarily a beer bar, not an eatery with good brews, or half-and-half.

UPDATE: On subsequent visits, the service has ranged from bad to horrible. The first time was a lucky one. To quote another reviewer: "The vibe/attitude so "too cool for school" that it borders on nauseating. Yesterday, after 10 minutes of sitting AT THE BAR without ANY acknowldegement by the staff (we counted 4 behind the bar), we left and went a few doors down to Surly Girl Saloon (where were enthusiastically welcomed by the bar staff)."

I agree. It's hard to get the bartender's attention and I'm boisterous. If you're not "in", you're not "in", it seems to be. I had the same experience, and also ended up in the Surly Girl after going to the cigar place and the antique shop on the same block. The Surly Girl had a good selection of taps (not nearly approaching the Bodega, Bob's, or the World of Beer, though), great decor and ambiance, weird food, lots of pamphlets and hand-bills advertising fashionable leftist causes and events pinned to bulletin boards, etc. (take it or leave it), and much better service.

FIRST VISIT: when I was there earlier in the day, was excellent - 5 out of 5 - with prompt service, helpful and knowledgeable barkeeps, cheap or free tastings of random beers, and good conversation on many topics and debates about beer - even though it was my first time at the place. As it became more packed, wall-to-wall, the service degraded exponentially, as is to be expected.

UPDATE: Selection is actually a 4. I've never seen St Bernardus Abt 12 on tap or in bottles again after my first visit, which is inexcusable.

Selection is 5 out of 5. St Bernardus Abt 12 is on tap, and every other St Bernardus is in bottles in the fridge. Huge selection of local beers (just about all of them, including some homebrews), including at least one cask-conditioned ale, about 50 taps - two walls lined with them - and maybe 150-225 different kinds of bottles, ranging from the most pedestrian (craft beer) such as Great Lakes, to the weirdest and rarest, such as never-before-heard-of bottles of gueuze, etc. They carry almost every Trappist except for Wesvleteren - Rochefort 6, 8, 10; Chimay Red, White, Blue; St Bernardus 8, Tripel, 12; Achel Dubbel; La Trappe/Koningshoeven Quad; Westmalle Dubbel and Tripel; Orval (including aged Orval), etc. The selection is ridiculously large - it rivals anything in Boston, New York, or Chicago. See it for yourself.

Food is average for a bar. The food itself that they serve, is good (although I've heard it's hit-or-miss), probably a 3.75 or a 4 out of 5. The selection is very small, but it's compensated for by the incredible selection of beers.

The beer is reasonable in price for a bar, 10 oz of St Bernardus 12 on tap going for about $10, a 750mL of Duvel going for about $16, so on and so forth - about 50-100% more than liquor store prices on bottles, as is expected for a bar. I think all taps are half-price during happy hour based on the size of my bill (only about $120 after twelve or more beers, about half from bottles). They have off-license, so they can sell you beer to go. The food is overpriced with small selection, and good, but not great. I give it $$ or $$/$ (2 and 1/2) overall for price. The beer is if anything underpriced. I'm used to drinking $30 scotches at most places that don't have good beers, so that may affect my thinking, but doubtfully so - the beer truly is cheap. For beer, $ - Inexpensive. For food, $$$ - Overpriced. Compromise rating - $$.

Overall, a 4 out of 5 - beer counts for more than anything else at a beer bar - and a recommendation.

Reviewed by Chrome_Dome from Ohio

4.13/5  rDev -3.1%
vibe: 4.5 | quality: 4 | service: 4 | selection: 4.5 | food: 3.5
Been to this place a couple times since October 2012, both during off-peak hours. Beer selection and quality is fantastic and constantly in flux. Definitely sense the younger Hipster and Craft Beer customer base. My value rating of 'reasonable' was a compromise, as I feel that while the food is delicious and of great quality, it is a bit pricey and I couldn't afford to eat there regularly. But, if you get the Happy Hour price on your beer, that is a really good value. At the end of my second visit, I was leaving just as they got into the swing of their evening business, and holy geez, this place definitely gets packed.

I totally intend to return to this place as often as I can and will continue to recommend to friends.