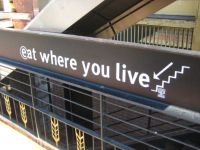 What I had: Hop Harvest and India Pale Ale on tap, two orders of Sweet Fire Fajitas (featured on Diners, Drive-Ins, and Dives), Chocolate Lava Cake to split, a couple of white wines for my partner.
What I liked: Attractive interior, plenty of space between tables, efficient and welcoming service, delicious food, both beers impressed (esp. the Harvest), fair prices, our server gave us the addresses of nearby craft beer stores when I asked where I could get a good haul.
What I disliked: Nothing.
Would I go back? For sure. Empire is an ideal spot for dinner and drinks if you happen to be in Syracuse.
Overall Rating: 82

I was driving cross country from Canada and decided to stay in Syracuse, NY, overnight because I had seen Empire Brewing highlighted on Brewed in NY and really wanted to try it out. It turned out to be quite a disappointment. My wife and I stopped in at 5:30 pm on a Tuesday and found the place nearly empty (Downtown Syracuse was surprisingly deserted on a work day). This is in spite of the fact that school is starting this week.

We explained to the hostess that we were interested in drinks and dessert and were informed that we could not be seated in the dining area, because we were not ordering full meals, so would need to sit at the bar. The place was basically empty. I ordered the Black Magic Stout, which I gather is one of the signature brews, and found it below average. The bar tender was satisfactory, but just -- the truth is he was remarkably aloof.

That said, EBC is nicely appointed, there are 16 taps at two different stations, there are a variety of seating arrangement and ample seating, and they serve a range of beers leaving room for a cider guest tap (which was far superior to my beer). Given the vibe, the service, and the beer, we never felt we were made particularly welcome and left after one drink (forget about dessert). I cannot imagine any reason to contemplate going back. Thankfully, we found someplace fun and welcoming a few blocks away and went there.

What an awful place. Service absolutely terrible. Bartender the worst. Nothing like being ignored sitting in an empty bar. I guess there is a reason why it’s empty. Beers bleh at best.

I’ll start out by saying that the food was fucking great! I had an elk burger with fried egg and bacon which was delicious. They had a decent selection of different beers but as far as quality goes...nothing really impressed me. The beer was okay with a nice vibe and a friendly staff.

My wife and I visited this brewery many years ago, back in the mid 1990's. We remember it being at street level, although now it is located in a sunken level of the same building. We enjoyed flights that included mostly ales, all of which were excellent. Most notable was a white beer that was exceptional. The food was eclectic. I had an elk burger that was solid, and the service was respectable. Worth a stop if you are in the area.

Stopped by around 4 PM on a cold and dark Wednesday. The pub is right in the middle of downtown Syracuse, a city where the architecture is pretty so as to deflect attention away from its horrific climate. You descend some steep metal stairs and then step into a large, cavernous basement bar that is bricky and woody and very warmly lit.

The bar has the feel of most other, nice brewpubs that opened between the early 90's and the early aughts, falling somewhere between a sports bar and a middlebrow restaurant. Large metal brewing kettles sit behind a glass partition, in full view of the bar. The bar itself is long and polished, and there's a chalkboard listing all the tap options. It feels nice: clean, but lived-in, very homey.

The staff was friendly and the bartender knew a fair amount about each beer. The tap selection was broad (about 15 house beers), with a good combination of older school brewpub flagships (stout, IPA, etc) and more adventurous new styles (beer with tea in it, beer brewed with asiatic hops that taste like mud, etc).

As to the beers... they were all solid, but all forgettable.

So, I dunno. If you find yourself in Syracuse, I'm sure there are more options. The place right across the street, for example, seemed to have a taplist of non-house beers that was much more impressive. But Empire was still worth visiting, I feel, as it's a warm and welcoming example of an older school brewpub, free from garish trappings of most of the places that have opened more recently.

Located in a very spacious, old building in the heart of Syracuse. Large bar area with two more large eatery area's.
The place to go before a show, stopped in for the second time during Phish's summer tour stop at the Lakeview Ampitheatre. Place was booming, good vibe and the service was able to keep up.

Food is good and beer quality about the same.

Love this place. Beer keeps getting better and better.

Been to Empire Brewing a number of times throughout the years when traveling "upstate" to visit family. It's in a cool basement location with a modern style decor. A glass window behind the bar looks in on a number of fermentation tanks. Never seen anyone actually working back there, but it's a nice touch. Service has always been friendly and prompt. The food, while a little upscale, has always been good. I'm particularly fond of the Gumbo and Jambalaya. Beer selections are good combination of in house and local offerings.

From the outside it is effectively a scaled up dive bar, but upon entering, it's a large restaurant with brewing production on display from behind large windows. As we perused the menu, we watched a brewer scooping spent grain out of a tank.

Service is attentive and knowledgeable and the selection is moderately large and varied with some classic takes and new twists. The beer didn't blow me away, but it wasn't bad either.

Food is all right, with a nice selection, although a couple of side dishes had me wondering if they were pre-processed frozen foods.

Empire Brewing Company - Brewpub in Syracuse, NY
Brewery rating: 3.65 out of 5 with 1096 ratings