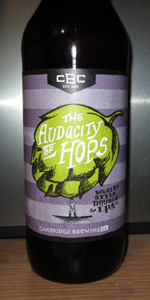 Bottled on 5/29/2015: Pours cloudy bright orange color with a 2 finger foamy bright white head that was full of tiny bubbles and faded very slowly, leaving good spotty lacing with rings as it went down, and a layer on top that looked like a photo from outer space of hurricane clouds swirling in a white foamy circle layer on top of the brew. The head from the second half of the bottle was huge, 3 fingers plus and faded very slowly.

Smells of fresh hops up front with piney hops and grapefruit hitting the nose first, followed by floral hops and flower notes, lemon zest, tropical fruit, yeast that's a little funky, spices like pepper, rye and cinnamon, wet cardboard, grains and some wet animal hair. Very nice nose that combines the Belgian notes and strong DIPA hops to give the final product the best of both worlds at the same time. Just enough malt sweetness to balance the hops.

Tastes like it smells but with more malt as the foundation wit Ritz cracker, light caramel and wheat bread mixing in with the piney hops, lemon, grapefruit, green apple, funk, spices including pepper, rye, coriander and cinnamon, chalky yeast, wet cardboard, toasted grains and mild barnyard/earthy notes. The sweetness negated the bitterness and let the fruit, malt and spices make for a complex brew that makes the most of the hops and showcases nice floral and citrus hop flavors and spices. Gets better as it warms, hiding the ABV pretty well the whole time. It ends like strong rye flavors but the overall spiciness is only mid-level and quite enjoyable, making it easy to drink.

Mouthfeel is smooth and almost buttery, with mild carbonation, a medium to almost chewy body and a slightly bitter aftertaste that is mildly spicy which then fades almost clean and dry. A really fine beer.

Bottle at PPRBSG09. Pours a clear yellow with a white head. Aroma of citrus hops and caramel malt. Flavor of sweet melon, citrus, with a bitter hops finish. Hmm, I thought this was just a regular IPA when I had it, although now I can see how there were some Belgiany notes in there too. Pretty decent.

Clear, dark yellow with a fizzy greyish head that fades fast. If I didn't know better this could be Colt 45 by appearance alone. Nice floral hops and Belgian spice in the nose. This beer tastes much better than it looks, big resinous hops and dry spicy Belgian yeast in perfect harmony. Full bodied with seltzery carbonation. One of the better "Belgian" IPAs that I've had. Well balanced between the hop bitterness and spice.

22oz bomber purchased at the Hunger Mountain Coop in Montpelier VT for $8.99 this past weekend.

Appearance: Pours a lightly hazy honey soaked copper with a 1 finger white crown that shows moderate retention and some lace.

Smell: Lots of pepper, some other soft belgian ester, light grapefruit and lemon citrus notes, and a moderately bready malt.

Taste: Same as the nose but with a firm hop bitterness that meshes very well with the belgian yeast character.

Overall: This is a tasty take on a DIPA that I would probably drink regularly on draft if it was available at my local pub. Not something I would put much of an effort into trading for though.

What a tasty and interesting concoction. Like nothing I've had to date. This beer flips the Belgian IPA mutant-style onto its ass and brings us an ultra-hoppy IPA with the Belgian characteristics taking the back seat. The fruity Belgian yeast is there in the finish but a big simcoe-heavy, West Coast hop aroma and flavors dominate, staying on the palate until your next sip. Lots of pine in the taste as well. The 8.5% keeps me from drinking this all night. A must try for hopheads.

S - Everything I love about an IPA. Dank, resinous, grassy hop aroma. Underneath, just a bit of clove and yeast character.

T - Juicy orange, bitter grapefruit and slightly lemony hop taste. The finish reveals a crisp pilsner malt. The hops dominate this beer, but there is still an undeniable Belgian yeast component. Aggressively bitter to the point of being a fault, but otherwise great.

O - I love this style when done right, and this is a great example. Definitely on the hoppy and bitter side, but this combines well with the subtle Belgian character.

My second bottle of this beer. I loved the first one and hope this lives up to what I experienced last weekend.

Aroma is fantastic. Actually very complex. A burst of citrus/grapefruit followed by some nice spice and some yeast notes. Then you are hit with a resin like burst of juicy green hops. Very nice.

Yep, I like it as much this time around. As in the aroma, quite complex. Lot’s of yeast character and spice. Black pepper and some green notes. Lot’s of aggressive hop notes with juicy grapefruit again laced with black pepper. The aftertaste is like that of a big fresh DPA with a layer of herbal notes layered on top. Nice complexity.

There is a soapy texture to this and I do not mean this in a negative sense. Oily on your tongue with fresh hop flavor.