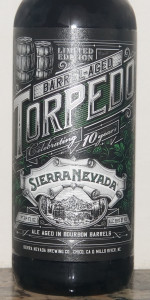 750mL corked bottle purchased at the SN Mills River taproom last month poured into a tulip pint glass at 55° Fahrenheit 8.6% ABV. The beer pours bright light amber in color with khaki head. The head recedes to a thin, uneven cap and plenty of lacing. The aroma is mild with vanilla, oak and faded citrus & pine. The taste is semisweet caramel with with a vanilla, oak and bourbon accent. There are traces of the trademark pine & citrus, but they are faded. Heavy bitterness throughout. The mouthfeel is medium bodied with average carbonation and a mostly dry finish. Overall, different and good. Maybe not something I'd buy repeatedly, but worth a try. The bottle is stamped 111219, so I suspect this would have been a far different experience two years ago.

Pours a slightly cloudy amber, worth a pale reddish tan head leaves behind some spotty lacing.
Nose getssome pine, citrus and a hint of bourbon, taste follows the aroma, getting some burnt sugars. Medium bodied, well carbonated. It's pretty tasty but I prefer the plain old Torpedo.

High on the success of Sierra Nevada's Torpedo Ale, its ten-year mark warrants a makeover. The brewery ages their formidable IPA in bourbon barrels to give it a stronger, more rounded and classically American twist.

Barrel Aged Torpedo pours with a foggy golden copper appearance before topping off with a creamy off-white froth. The sharper hop aromas give way to a spicier and boozier nose of oak, pine, citrus peel, whisky spice and pepper while wrapped in a soft and caramelized cocoon. Its firm maltiness carries over those caramelized aromas into taste with a toastier and more savory play on caramel, honey, nuttiness and toast for a suggestion of granola early on the palate.

But as the hops march about the middle palate, the flavors slowly start to favor the sharper and more resinous flavor of orange peel, pink grapefruit and pineapple rinds. Bittersweet in its balance, the beer continues to shift more toward hop bitterness with a woodsy, grassy and peppery hop bite that mingle well with the influence of charred oak and bourbon spice that frame the beer's later taste. As nuanced vanilla, cream and coconut round out the taste, its character is more of an American Strong Ale.

Medium full in body, its strength and powerful flavor suggests a fuller texture, but its stronger and drying alcohol work with drying resins for a spicier, drier and surprisingly refreshing taste. Finishing on the bitter side of bitter-sweet, Barrel Aged Torpedo trails into a long and resinous finish that reminds us that its still an IPA at heart.

My pour generated a nice froth, one that stared at me for a while with a rusty white eyeball. On the edges a matched color surrounded the surface, giving a teary-eyed impression. Extending the metaphor, the tear drops formed a trail down the glass.

The nose was actually quite impressive - there were the remnants of the citrus hops bouncing off the barrel wood spiced its previous inhabitant. It seemed one of those sublime experiences that I don't think words can explain well, but the barrel and beer components worked so well together int he aroma.

On the taste, the barrel and the bourbon it held onto before being drawn out and into this beer break this experience. The notes were nice, even interesting on their own, but given room to breathe in a less alcohol-concentrated environment, they had a watered down aspect. Thiat watered down whiskey aspect takes the foreground, but the beer did come out eventually. There was some coconut and reedy grass that act as a prelude to the main actor's part in this play. It might've been a bit of a stumble getting there, but the ship righted itself against the "watery" opening. The spice of the alcohol numbed things a little, dulling the hoppiness of the beer. The malt backbone carried through, though, and hop bitterness came to me in minty more than piney notes initially. There was a hint of spice and then finally, the pine lingered.

Not the best barrel-aged IPA I have had, not by a long shot. It is pretty good for the price point. The aroma of shelf turd IPA really hurts this beer. The flavor is much better. Other aspects of the beer are right on point as expected from Sierra Nevada.

Pours a clear, rustic orange with a thin, white head that lasts.
Smell of candied citrus fruits, big tangerine.
Good hop bitterness that is smoothed over by the good Barrell presence. Vanilla also shows. Piney in the end.

5 oz pour on tap. This is not what I expected - as other reviewers have noted, there is very little actual bourbon flavor here. It's more a hint of smooth vanilla and oak on top of the base beer. An interesting beer that I'm glad to have tried.

Appearance: The body is a dark copper with good clarity and small hints of golden-brown. It has a short white head with good retention.

Aroma: At first a bit of pine comes through, then wet wood and alcohol. There is a light aroma of vanilla and brown sugar.

Taste: Up front there is a pleasant pine flavor with a touch of grapefruit right at the front of the tongue. This is quickly replaced by a mellow vanilla and oak wood flavor. It slowly finishes with a strong pine and mild mint character that is mixed with a wet wood flavor. The overall flavor profile is very forest-like. It tastes perfect.

Mouthfeel: It is smooth with a bit of raspy carbonation and and a strong hoppy bitterness. There is a light tannin character on the mouth but it doesn't feel dry.

Overall: It's a fantastic tasting beer that does both the base beer and the barrel it was aged in justice. I really recommend it and it is worth picking up. I'd buy it again.

a tenth anniversary release in large format, in bourbon barrels, apart from the other listing here on BA where it was done in rye barrels, says right on the label. its a unique beer for this style, in that its still hops before barrel, likely dry hopped after the barrel treatment. they were smart to keep the base beer recognizable, and thats what i like best about it, not too much whiskey to take this out of big west coast ipa range, it still is that. the barrels adds more wood than anything, some honey and vanilla character but not whiskey driven to me, its still hops first, maybe a touch less bitter than usual in a torpedo (of which i am proud to say i have consumed my fair share and then some!). some light bourbon aroma, but more malty and woody leading up to the hops in the taste. its maybe richer, maybe more complex, but its ultimately another expression of the iconic base beer, and while some might find that less appealing, i love it! torpedo with some wood, torpedo with a little extra heat, torpedo with complementary woodiness and richness, its great! lots of bubbles from the bottle, a fancy presentation, and a staying power on the palate that has me appreciating it half an hour after the last sip. nice mess around here, i always worry when someone plays with a classic, but this really works. i see bourbon as better than rye for this one, but id like to try that edition too if it still exists. sierra nevada has such an underrated barrel program for how legendary the brewery is...

A: Pours a clear amber with a thick couple inches of very dense light tan creamy head. The head slowly faded into a lasting thick fuzzy film that left spotty lace down the glass.
S: Citrus is juicy and noticeable, torpedo C-hops are full of citrus peel and grass, bourbon barrel is faint but noticeable. Not hot at all. Hints of peach, stone fruits, and vanilla as well.
T: Follows the nose. Finish is full of vanilla and mild caramel. Bourbon barrel adds nice dimension and is not hot. Lingering citrus pith in the finish is bitter. Peach and stone fruits in the finish. Bourbon is mildly spicy and full of caramel and vanilla. Citrus lingers in the aftertaste.
M: Medium full body, slick and oily hop resin mouthfeel, bitter and tingly bubbly carbonation.
O: Really enjoyable. An improvement on the original in my opinion.

This is always an interesting style and one that is surely hard to pull off. From the few BA beers I have had from Sierra Nevada, they tend to go a bit too light on the barrel for me. The hop notes are amazing and the way the hops shine in the nose with a bit of barrel is quite interesting. More barrel comes through as it warms. In my opinion, if you do this style, it makes more sense to let the barrel shine and let the hops play second fiddle