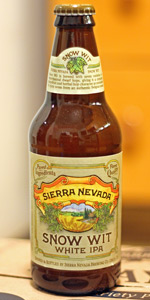 Rated by The_BeerBaron from California

Appearance in the photo was golden. 1/2" of white head, looks like the standard of professional appearance we've come to know from Sierra Nevada. The aroma you can't tell from the picture, but it was an interesting experience, the belgian ipa designation made me think I might be in for a hefty yeast aroma, but that took a major back seat to what seemed like American hops.

Taste kept the beer going in that direction, sure the yeast might have been belgian, but it was the hops that continued to push the taste and mouth feel. Citrus, wheat, light yeast notes, in that order. Bitterness in the American hop vein. They were listed as experimental varieties, but I dunno, they kick out some familiar grapefruit and bitter citrus notes along the way. I liked it.

3.75/5  rDev +1.9%
look: 3.75 | smell: 3.75 | taste: 3.75 | feel: 3.75 | overall: 3.75
Two bottles, one poured into a mug and the other in a pint glass. The appearance is basically the same color between the two - hazy yet somewhat clear golden color with an adequate amount of carbonation seen rising. The head is the same in both glasses - it rises with a foamy current just a tad above both glasses and then falls into little valleys here and there. A nice amount of thick foamy lacing clings to both glasses. The smell is the same in both and has some light tropical fruits such as pineapple and orange pervading through some light spicy hops. The taste is spicy yet sweet and also adds the elment of bitterness all combined wonderfully to have a great smoothness all around in the flavoring. There is a slight bitter yet spicy aftertaste and leads to a quick dry finish. On the palate, it sits about a medium on the body with a fairly defined harsh quality on the carbonation of this beer. There is a somewhat light sessionable quality to it that could be fair with its respected food. Overall, is this an AIPA or a Witbier? In my opinion, Sierra Nevada has taken two styles and made a wonderful combination between the two.
Jul 01, 2017

Rated by Dankenstein716 from New York

Rated by mvragucci from New York

Kind of a vegetable smell with some hop notes.

Taste was an unusual bitter hop flavor with a note of sourness on the finish.

The mouth feel borders on the medium with a wet finish.

This is an unusual beer that states it is brewed with seven varieties of experimental dwarf hops. I think this adds to the unusual taste as the normal pine and floral hops are not to be found here. I find this to be an unusual and quite unique beer that stands alone.

Reviewed by BeerAngel from Texas

4.47/5  rDev +21.5%
look: 5 | smell: 4.25 | taste: 4.5 | feel: 4.5 | overall: 4.5
This is one surprisingly solid brew. And not because Sierra Nevada doesn't do great things, but rather I didn't expect this much hopping in wit style beer to be such a great combo! This beer pours a clear golden/orange *unless you swirl the bottom yeast loose...with a dense 1.5 finger white head on a controlled pour. The smell of the belgian yeast and hops comes through at the first whiff. The first part of the taste is a black pepper hop bit that slides into the spicy sticky belgian yeast goodness that I love! The body of this beer is very good and and I highly recommend. A wit with a kick!
Feb 25, 2016
Rated: 3.75 by mindfuldave from New Jersey

Reviewed by jopezu from Georgia