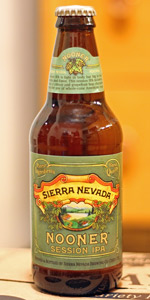 Rated by The_BeerBaron from California

Pours a massively clear golden color with 3/4" white head. I mean, as far as looks go, this is top notch and about as near perfection as you can get. Perhaps the lighter color is a turn off, but its to style, this isn't a giant malt bomb. Grassy aromatics in addition to a slight hint of grain/barley.

Good bitterness, ample carbonation in the mouth feel. Still pushes a hearty degree of dry pine bitterness despite its small stature. Hint of lemon like bitterness to it, like they flirted with a neomexicanus hop. Old school Cascade like grapefruit throughout the entire drinking experience. Its kind of similar to SNPA but without as much hopping and way less crystal like malt feels (about the only time I dig on that is SNPA). Its just a nice simple Cascade/Magnum(?) like hopping on a smaller scale, and its one that works in the right setting (weekdays).

Smell is floral with corn and grass.

Taste is clean and bitter grass and grains.

Rated by weaselface89 from Georgia

Rated by target88 from Kentucky

Rated by Ale_Dog from New York