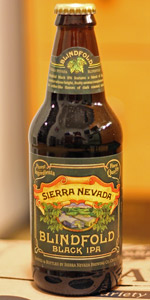 Notes: Blindfold blankets us in darkness yet maintains a surprisingly light body and bold, hoppy character. This black IPA emerged from our Beer Camp program and builds on Sierra Nevada’s legendary love of hops with roasted malts for depth and complexity. Like its namesake, Blindfold is a bit disorienting—the color of a stout and the intense, hop-forward flavors of a classic American IPA.
View: Beers | Place Reviews
Reviews: 233 | Ratings: 1,422 | Log in to view all ratings and sort
Reviews by burnerfinger:

12oz bottle poured into a wide flute. The aroma is initially licorice and bakers chocolate, with undertones of sweet citrus Later in the drink, coffee gets added to the mix with a chalkiness, some caramel, and just a touch of wet cardboard. The beer is a rich, oily mahogany with a light brown, frothy dense head that leaves good lace, and has an abundant, but uneven retention. The taste is a medium high, balanced chocolate bittersweet. The texture is smooth with a creamy, foamy head. The medium-full body consists of chocolate brownie, background notes of sweet citrus, and chalk up front, and finishes with a swell of sweet citrus and caramel (in turns), that's quickly replaced by a clean chalk and spice character flavored with coffee and peanut butter. These notes mellow quickly leaving an aftertaste that's chalky, piney, and clean with hints of peanut butter. After a long time, the peanut butter disappears and is replaced by a light, pleasant grapefruit.

A : A coffee black body with dark chocolate accents when held up to the light. The head is beige, enormous @ 3 fingers, and leaves generous lacing in flecks and spots as it recedes.

S : Maybe I should have poured this in a snifter because i'm not nosing much at all here. Some charred and roasted malts, coffee, with some faint grassy hop behind it. The volume is weak and takes a lot of effort to get a sample.

T : Lots of hop action right out front with pine and oils, and then it takes on a dark twist with fresh road tar (that taste in your mouth you get when you're smelling it as you drive by), toffee, molasses, and finally a pinch of ground coffee. The coffee and roasted flavors remain resting on the tongue at the finish. This is definitely more hop heavy than "black".

F : The carbonation is intense and electric, and behind it is a sappy dry body that when paired with the coffee and molasses develops a tarry and sticky finish.

O : It's solid but way too in-your-face. It's totally on par for what a black IPA should be, but I personally prefer Zipline's offering.

BOD 109/14. As advertised, this one pours just like a stout - almost black with a massive head. Lacing and retention are excellent. The nose is more IPA like, pine and floral hops over a light chocolate with roast notes. Medium body with a slick texture that is almost creamy. Below normal carbonation with no effervescence on the finish. The unique flavor profile is quite nice, balanced and complex. It begins with citrus hop, then flows to pine over a light chocolate sweetness. Bitterness follows that is citric rind in nature over a very light smoke from the roast - very well balanced so each component is evident, but not over powering. The smooth finish leaves you with a lingering citric bitterness with a chocolate note. An Outstanding example of the style.

Poured from 12oz bottle into a pint glass.

Appearance: rich, dark brown hue, appearing nearly black but for red highlights when held up to the light. There appears to be no haze, and the head poured three fingers of creamy tan foam. I think it's quite the presentation!

Smell: overall aroma is of moderate intensity; the malty character of chocolate, caramel and toffee comes up first, followed by a mellow, earthy hop character. Not at all bad; the mix works well.

Taste: flavor is along much the same lines as the aroma. Starts off with a chocolatey malt character, filled out with a bit of brown ale. Hops are earthy and bitterness is moderate. Middle-of-the-road, but well-crafted.

Overall: this is one of the more quaffable American Black Ales out there, I would say. I feel like it's been brewed for drinkability, rather than extremity, as so many beers of the style seem to be. I rather like it.

Not the best black IPA I have ever had but another solid offering from SN.

Thanks Slatetank for gifting me with this. Standard 12oz bottle into a tulip. The brew appears dark brown with clarity when held to the light. Some brown head rests atop, fading leaving patchy lace on the glass.

The smell is piney with some roasted chocolate and coffee appeal before a slight tingle of hops gets noticed. The taste includes notes of coffee, chocolate and roasty earth with piney hops. A slight mineral feel lingers with citrus hoppiness.

This is a medium bodied brew with a modest amount of carbonation. A pretty standard black ipa that I really enjoyed for its lack of over the top hop influence though, it was still present and accounted for. I would drink this again.