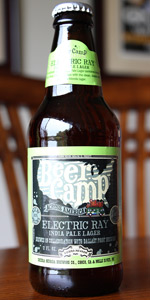 Not bad, but I'm not converted.

This was a collaboration with Ballast Point, gotta dig it, two of my favorite breweries (in the world/CA) with great availability, production and consistency get together. What could possibli* go wrong (Simpson's gif). I think they later sold this in 6 packs itself too?

Anyways, pours an innocent looking enough yellow and slightly light copper mass produced lager with plenty of clarity and a sizeable 3/4" white head. Professional as it gets, could be confused for Budweiser it looks so good. Given that it has substantially more hops, its actually even more impressive appearance wise. Aroma imparts some bitter grapefruit like hop aromas and that lager yeast.

Taste, its bitter, its floral, its hoppy, grapefruit rind. Alcohol is in the taste and mouthfeel, there is a bitter burn, but the body isn't heavy, nor does it rise to the level of problematic heat. Once your palate gets set, you actually are able to drink it faster than you should. Cascade and Nugget hops are all over this one, I grow both of them, they are very plentiful here.

Reviewed from (very long-standing) notes. Consumed in late 2014. Poured from a 12 oz. bottle into a Fat Head's pint glass.

A: Pours a clear gold, with a one-finger white head with good retention. A good amount of visible small-bubble carbonation.

S: Cracker malts, clean lager yeast, and some resin and floral hops. Not a huge aroma, but nice enough.

T: A nice punch of hops up front - sticky resin, floral, and a bit of citrus rind. All of which is balanced by cracker malts and their attendant sweetness. A light floral hop bitterness in the hang.

M: Fairly light-bodied, average carbonation sensation. The alcohol is a bit more noticeable in the hang than expected, but not obnoxious.

O: A reasonably good beer, but nothing exciting and not my favorite out of the bunch for sure.

Aroma is yeast, pine and malts. The flavor is citrus, grapefruit, mildly earthy malts and a mix of spicy and bitter in the finish.

12oz bottle into a snifter. The brew appears a clear copper color with an off-white creamy head that fades leaving patchy lace.

The smell is orange rind, slight candy sweetness mingled with a cheesiness and herbal component.

The taste is rindy with contrasting mild sweetness and citrus with a lightly fruity alcohol character that is somewhat solvent as it warms up.

This is medium in body with modest carbonation. Overall a decent brew but not something I see myself purchasing again.

Pours out to a slightly hazy light amber, forming a tall off yellow whipped head with superior retention and beautiful lacing. The nose is bright with floral hops, kinda rosy, with pineapple and grapefruit, light mango and light pine. Cleanly fermented. The mouthfeel is clean, bright, full bodied with a slick sheen on the tongue. The taste is a recap of the aroma...lots of pineapple, mango, grapefruit and pine. Bitterness is medium firm but still nicely balanced, finishing dry in the mouthfeel but with a pleasing sweetness which balances this beer out. No off flavors or aromas.

A very nice beer. Quite rich, This reminds me a bit of hopslam in its balance and hop profile. I would definitely buy this again if it were available. Very well done.

Not bad. Just didn't leave me wanting another. Seemed a bit thin. Glad I got to try it though

"As ever, San Diego's Ballast Point looked to the sea for inspiration. A play on the fish's scientific name- Torpedo californica- Electric Ray plays homage to our Hop Torpedo, the source of much of this beer's big flavor. Its massive grapefruit and floral notes deliver a high-voltage hit of hop flavor." Brewed in the style of an American Pale Lager. Available in single 12 oz. bottles as part of the Beer Camp Across America 2014 Variety pack and on limited draft.

Poured from a 12 oz. bottle to a Sierra Nevada tulip glass. Served above 57 degrees Fahrenheit.

(Appearance) Pours a foamy froth head of a pale off-white complexion over a moderately hazy apricot-amber body with flecked sediment and light carbonation visible. Retention is above average and lacing is light and spotty. 3.5

(Smell) The aroma balances hop and malt notes evenly, with a malt profile of biscuit malt and light caramel syrup and a lightness of cracker malt accented with a moderately bitter hop profile of pine and mellow grapefruit. Potency is moderate. 3.5

(Taste) The flavor generates much of the same flavor that the aroma suggests, with a solid malt base of caramel biscuit and moderate syrup with a mild sweetness, hop notes of grapefruit and pine more prevalent, with tropical fruit and floral notes secondary, even more vibrant over the aroma with a moderate drying bitterness. While Electric Ray doesn't drink quite as light as the average American Pale Lager, the yeast profile generates a considerable cleanliness which allows the subtleties of the malt and hop profiles to display uninterrupted. 3.75

(Mouthfeel) The texture is lightly chewy, mildly syrupy slick and moderately dry. Carbonation is modest, generating a medium frothiness and a very lightly crisp finish. Body is medium+ for the style and medium overall. Balance is slightly bitter over sweet. Alcohol presence is low and there are no notable off characters. 3.5

(Overall) One of the best beers of the variety pack thus far, Electric Ray generates an uncompromising balance and profile of malt and hop flavors for an India Pale Lager which gives the IPA a run for its money. The malt body drinks a bit heavier than one might expect going in, but the end result is generally favorable, and makes for a very tasty beer, a collaboration I would not mind seeing venture into stores once again in the future, perhaps? 3.75

Camped w Ballast Point Brewing Company for 2014-15 season.
This is what I imagine they serve at JOY CAMP.

A - Pours an orange, caramel, semi-clear body with 1 finger of merengue like, off-white, frothy head that stiffens to some standing waves and laces massively.

S - Too laid back but fresh and clean as to be expected by a lager - lime, pine, floral hops, ... a malty IPL.

Never had a high gravity IPL. Into the pint glass!

A - Color is a hazy amber brown with mild floaties and a 1/2 inch of head that forms great lacing!
S - Mildly sweet, little lager smell, and mostly hoppy.
T - Quite good has a very dry hopped herbal hint to it with a smooth lager yeast body and no real skunky flavors.
M - ABV is well masked it drinks like a drier version of an IPA.

Overall it's slightly more chalky as I sip but easy to quaff back. Quite good!