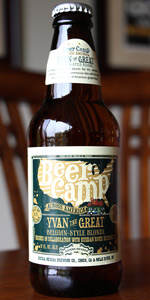 Notes: As longtime friends, Russian River brewmaster Vinnie Cilurzo and our own Brian Grossman are no strangers to brewing experiments. While looking for inspiration for this collaboration, Vinnie and Brian decided to honor the creations of legendary Belgian brewer Yvan De Baets with their own hop-forward American-Belgian mash-up.

From complex Belgian-inspired styles to American wild ales and hoppy Double IPA’s, Russian River always pushes boundaries while respecting technique and quality. Co-owners Vinnie and Natalie Cilurzo are longtime friends of Sierra Nevada and they always have a six-pack of Pale Ale in their fridge at home.

12 oz. bottle poured into a globe glass. Yvan pours a light golden in color and with a touch of haze. A white cap of foam offers moderate retention then leaves a steady surface cap of lace throughout the glass.

Aroma is rich with lemony hops, belgian yeast notes and a notable peppery coriander spice component. More lemony grain on the taste and with a spicy and smooth finish. Touch of coarseness on the finish arrives with warming of the beer. Offers a well balanced carbonation and body to give a full enough feel on the finish. Not too thin and yet not too much residual sweetness either. Easy drinking brew and nice take on the style.

Sun golden yellow in appearance with a pencil thin head.

Smells a little funky! This I mean in a good way of course , but it does smell like a wild Belgian man.

Now I taste the funk and the hoppy and earhy notes with a very breadlike backbone.

Mouthfeel is sweet and breast upfront and a bitter, peppery hop dry finish.

Overall not the greatest thing ever made but if this was a seasonal if pick it up again.

Pours light amber in color; clear with a wmall weak head that soon dies down to a ring and leaves minimal lacing.

Flavor: Yeasty and spicy with a subtle but solid malt base. There's a touch of funk and mild bitterness in the lingering aftertaste.

O: a good, relatively hoppy version of a style that is not among my favorites.

I consumed the 12 beers in the Sierra Nevada Beer Camp pack over a roughly two week span in order to avoid having more than a couple beers in one sitting and potentially burning my palate out. I will now review all twelve, from notes, in the order in which they were consumed. Time for some Yvan the Great.

Enjoyed on 7/29 out of a 12 oz brown bottle with a bottling date of 6/2/14 marked on the back label, however due to the white ink of the dating and the yellow-almost-white color of the label, it takes some work to be able to see it. Poured into a North Coast Belgian tulip glass.

Appearance - Pours a somewhat hazy straw yellow, with the light passing through and imparting highlights of lemon rind and amber-gold in certain spots of the glass. Atop the body sits a frothy two-and-a-half finger ivory colored head. Retention is quite good, with the foam hanging around before finally ending up with a moderate film and intermittent lace spots on the side of the glass.

Smell - A nice blend of spicy Belgian yeast and the light pungency of hops, with notes of citrus zest, white pepper, baking spice and even lemongrass. There is also a nice foundation of pale malt to provide a solid vehicle for the mix of spice and fruit. My only complaint is that I wish it was a tiny bit more aromatic.

Taste - Picking up where the smell left off, there is an underlying light perfume aspect that is typical of Belgian yeast, with the white pepper and some light floral impressions. Then the high-hopping enters, providing a nice pungency of citrus zest and lemon with some faint suggestion of grapefruit pith as well. I must say, the subtle bitterness and spice play very well together and turn a beer that might otherwise be boring into a very quaffable beverage, that still doesn't want for flavor.
Mouthfeel - Light bodied and moderate to high carbonation, with a slightly bitter, drying finish.

Overall, this is one of my more preferred beers out of the pack, as the brewers at RR and SN have managed to find that sweet spot between the two quintessential characters of American and Belgian approaches--hops and yeast. And with both, they manage to infuse them without letting one overpower the other, so this stays firmly out of the IPA/Tripel hybrid that is the Belgian IPA. Instead, you have a much easier drinking, but nicely interesting beer.