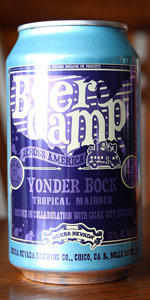 Notes: Tampa is a long way from our home base in Chico, but the guys down yonder in Florida sure can brew a great beer. Our friends at Cigar City find inspiration in the Cuban roots of their hometown, and that Latin-inspired flair is evident in Yonder Bock. This tropical take on the Maibock adds a Latin island flair to this traditional German style beer.

Enamored with the Latin roots of their Tampa home, Cigar City always tries to channel a bit of local history into their beers, e.g. the Humidor Series whose beers age on Spanish cedar as an homage to Tampa’s cigar making roots. Only five years old, this brewery deserves the fast praise that’s come its way.

When the Beer Camp series was released, a buddy of mine snapped up several cases and knowing about The CANQuest (tm), he decided to bestow a couple of the CANs to me. The backlog at Chez Woody is phenomenal and so I am now getting around to them.

From the CAN: "Brewed in Collaboration with Cigar City Brewing"; "Brewed in collaboration with Cigar City Brewing in Tampa, FL, Yonder Bock is a Latin-inspired twist on a traditional Maibock. Cigar City finds inspiration in the Cuban roots of their hometown, which is a long way from our home base in Chico, but our friends down yonder in Florida sure [CAN] brew a great beer. Yonder Bock blends a silky malt body with bright, fruity hop aromas of guava, mango and passion fruit from the use of Calypso, Azacca and experimental 366 hops as a nod to Cigar City's tropical locale."

I Crack!ed this bad boy open and oh, how I wanted to CANduct an inverted Glug, but I CANstrained myself due to its relative age. I CANnot take the ChANce that one of these beers might be CANditioned, so I felt CANpelled to go with a gentle pour. When this only netted me a skim of light-tan head, I CANtinued to employ the bartender's trick and give it a good agitation. Soon, I had two fingers of light-tan head that quickly fell back to wisps, leaving sticky lacing in its wake. Color was Deep Amber/Light Copper to Copper (SRM = > 13, < 17) with NE-quality clarity. Nose reeked of tropical fruit! My first WestPac as a U.S. Navy sailor exposed me to all sorts of fruit, like papaya, mango, guava, plus avocado and throw coconut into the mix and you begin to get the idea. I knew a young Filipina who eschewed perfume in favor of smearing herself with fruit. Yeah, she was a sticky mess, but she smelled great and tasted better! Mouthfeel was kind of thin, which was slightly disappointing. The taste was so fruity that I was transported back to the hammock in the middle of Uncle Sam's B&G in Barrio Barretto where Miriam and I were forced to copulate one night when all of the other racks were filled. I mean, right out in the middle of the so-called dance floor. Mama-san only half thought that I was kidding when I paid Miriam's bar fine, since she had seen a lot of my antics during the past week and a half. My shipmates got into the act by buying fresh fruit from passing vendors and squeezing juice all over us! Mama-san, not missing a trick, began to collect money for the "floor show" and we each got a cut. I did it twice more before we pulled out and my reputation was cemented. I get a chub any time that I am in proximity to tropical fruits and their flavors. The heck with Viagra, I have Yonder Bock! Now, where's #TheOldLady? Back at Beer Camp, the finish was Sweet (that's what she said), but not cloying. My enjoyment might have been diminished by sickly sweetness. Final pour: Perhaps a tad more haziness, but barely perceptible; nose was more pronounced in terms of fruitiness, due to warming or otherwise (?); taste remained fairly equivalent.

12 oz can poured into a craft tumbler

A- Chestnut with some ruby hues. Tan two finger head has good retention.

T- A little different from the nose. Subdued tropical notes up front. Sweet malt comes at the end, a little bit of fruit juice.

O- Another good hybrid style. Malt bill is bock, but the hop profile is definitely an IPA. A juicy tropical one. This blends well.

Poured from the can into a glass.

On tap at Bx Beer Depot. Served in a taster.

Smell - Really doesn't smell like much. Some caramel malt with a light floral character.

Taste - Still not exciting. Caramel and some grapefruit. A touch of stone fruit. Almost no bitterness.

zp6167a from District of Columbia

A: pours very clear, but a little on the deeper side of blond/orange for a maibock.

D: drinks very sweet to start. body is rich and full of good malt flavor. good citrus punch. bitterness is low to moderate. a little boozy, but not out of the ordinary for the style.

M: moderate to low carb on a full body.

D: a very unique bock beer. good hop flavor. lots of tropical notes with a big bock body. im happy to say this is the first time I have had a beer like this.

I really enjoyed this. I'm a big fan of Helles Bocks, and this is a very interesting take on the style. Wish there were than one of these in the 12-pack.