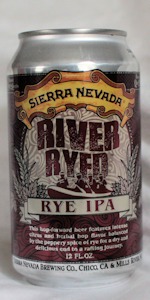 Had this back in August 2017. Didn't really stand out compared to their other rye or red ipa beers. So that's a mixed bag because none of them were bad nor hella good.

Pours a dark amber appearance similar to where some red ales go. 1/2" off white but dense and long lasting head. Has that dark bread and bittering hops kind of aroma, alongside that red maltiness.

Taste reveals more of a mashup of styles. Its like a hoppy brown, red and rye ale all under one roof, largely based off the malt impressions, but also the bitterness of the hops. I thought the rye here was pretty much imperceptible from a their hoppy red offerings. Woody impression from it. Did they drop two cubes per barrel in or something? Instead of a dry finish, you're left with the usual trappings of a malty caramel and toffee bitter impression. Its a sticky beer both from the pine resin like bittering hops and the hefty malt usage here, both barley and rye. Decent, but not exactly memorable, like quite a few variety pack offerings.

This pours a dark amber color. Big rye forward aroma, lots of pumpernickel and a sticky citrusy note on the back. This is a full on rye beer for fanatics that some how snuck its way into a mainstream sampler pack and I couldn't be happier about it.

Caramel color with a slight haze. Nice foamy, whitish-brown lingering head. Big time rye aroma with hints of freshly-turned dirt and honeysuckle. Hints of molasses and old road on the front palate, not overwhelming. Very smooth with a complicated earthy, nutty finish. Medium body with an average-length finish. Good beer when I'm not in the mood for a hoppy fruit bomb.

Poured from 12-ounce bottle into a Riedel "O" champagne glass. Sample was about five months past bottling date. Clear, caramel sauce color, with a thick, spongy white head that took several moments to settle. Lots of sticky lacing. Aroma is subtle, with dark bread, peppery spice, and a little grassy earthiness on the nose. The peppery spice is prominent on the palate as well, along with a touch of sweetness and a ton of lingering bitterness. Excellent beer, even with a few months on it.

I haven't tried a good rye beer in a while so this seems appealing. Huge head with spotty lace and a grainy, spicy nose.

A little flat in the opening but recovers nicely showing plenty of character. Spicy rye provides a solid recovery with caramel, medicinal and herbal hops, and a touch of clove. Texture is flexible and allows for complexity in the flavor. Another steady effort from Chico.

A: Deep amber/reddish color. Finger of slightly tawny. Moderate carbonation that lazily rises to the surface. Head hangs on for a bit. Excellent lacing.

T: Toasty rye spiciness. Hops are a bit subdued, exhibiting an earthy tone with bits of citrus and pine. Tastes like a lot of caramel malt going on here. Finish continues with pine and slight earthy note.

M: Medium bodied. Slightly slick in the palate. Carbonation is mild on the tongue but does scrub a fair bit.

O: Not bad. Pretty classic Sierra Nevada if not a bit faded (understandable given the age).

It seems as though I am still looking to get it in the CAN, but for now, a bottle courtesy of my local, in-person trader, tone77, will have to do.

From the bottle: "Feeling adventurous? Explore the wide open of the outdoors with our River Ryed IPA. This hop-forward beer features intense citrus and herbal hop flavor balanced by the peppery spice of rye for a dry and delicious end to a day out on the water."

I Pop!ped the cap & began a slow, gentle pour into my awaiting glass. An in-glass swirl raised two fingers of dense, fizzy, tawny head with moderate retention. Color was solid Copper (SRM = 17) with NE-quality clarity, the shade of an ex's hair. Gorgeous (both her & the beer)! Nose had the earthy, spicy quality that is the hallmark of a Rye Beer & now, my mouth was watering in anticipation. Mouthfeel was medium. The taste was beautiful - earthy malts commingled with peppery, spicy rye to create a beer that could have been thrown into the still and made into rye whiskey. It tasted like the beginning of a bottle of rye! Man, this was right up my alley. I used to really avoid hard liquor since I had a number of unpleasantries with it as a younger person, but the advent of microdistilled Rye Whiskies brought me back into the fold. The cool, minty finish on this one was the kind of thing that really makes me sit up and take notice. It was not evergreen, like some hops impart, but instead, more towards peppermint or clove, but with an earthiness like freshly-turned soil. Dry? Yes, but not gasping. Just a very pleasant, easy-drinking beer that went down MUCH too quickly. PLEASE let me find this in CANs ...

Pours to a permanent white head and ample lacing.Deep amber color. Aroma is citrus and floral with hints of pine and pepper. Flavor is bold with the spicy twang of rye making it special. Hop forward but respecting the grain. Great beer.

This beer pours a deep amber with large white head. The aroma is fairly muted, with a little pine, spice, and floral quality. The flavor starts soft and richly malty, and then progresses with a small bitter kick to a piney, resinous place, accompanied by notes of grapefruit peel and orange blossom. The finish a a nice hit of spice and sandalwood. The mouthfeel is thick and soft with foamy carbonation. Overall this is a good beer - maybe more subtle than I was hoping, but it does have a great cascading effect as the flavors change.

Gorgeous clear copper, slightly off white foam that is impressive from first pour until last sip. Big citrus and floral hop nose that’s a little bit spicy. Cracker malt In the background. I taste the light spice from the Rye, smooth citrus hop, bit of cracker malt. All so well integrated and smooth, both in the taste and mouthfeel. I reckon that this would be a good introductory IPA to someone just starting to explore the style.

Burnt orange color. Clear appearance. One-fingered, frothy head that receeds into a bubbley collar and leaves constallation lacing. Aroma is pepper, dog crap, citrus and weed. Definitely taste the spice from the rye. Starts off earthy and finishes with a spicey hoppiness. Thank god this did not taste like dog crap. Also can taste the dry sourness of a grapefruit. Gives you the sensation of cotton mouth. There is one big flaw and that is the dog crap thing but the beer itself overrides that. Really like this beer. Thanks again brenn79.

This rye IPA pours a dark reddish brown color with a medium frothy white head. The smell is mostly hoppy with citrus and herbal notes. There is also a significant, but not overwhelming rye presence in the scent. There are flavors of citrus, pine, and herbal hop elements that mingle with a fairly robust rye presence. There is a good amount of malts here, but the spicy rye somehow manages to accentuate the hop flavors making it seem pretty hop forward. The body is medium. The finish is dry and there is a significant amount of lingering bitterness. I think that a lot of hop lovers will appreciate this, but I tend to prefer a more refreshing, crisp IPA, which this isn’t. I really like the idea of a rye IPA, but I don’t think it works as well with these hop varietals as it might have with some others.

This is a nice earthy, peppery rye IPA. Not for the faint of heart.

Taste: Spice of rye and citrus-pine hops smack at the tongue up front, with a smooth-bodied bitterness at the finish. Solid and enjoyable rye IPA.