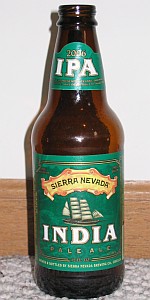 Hopefully its obvious this is an old review. Still have the shirt and the pint glass. Wanna say this came out in like '99 maybe? Could have been 2000.

Anyhoo, poured similar to a lot of their ipas/pale ales, darker than average. 3/4" white head, great retention for an ipa. The aroma was hoppier than about any other English ipa I've ever had. Lots of woodiness, pine and grapefruit to it. Think of Ichy IPA but with more hops. EKG hops might be here, has that earthy mild tree and citrus thing.

Taste was fine. A lot of C hops make me think this is borderline on the English ipa categorization, but I get it compared to today's proprietary hopped juice bombs. Malt had its share of heavier stuff, but nothing that should be foreign to a Sierra Nevada hoppy beer fan. This one tasted similar to pale ale, but seemingly with less crystal malt, and yet, more toffee notes. Burton yeast? I dunno. Around 50ibu with heartier than most malt bill and perhaps a mix of old world and old new world hops.

A nice copper big with a big head. It has pine and oaky smells. You can't smell the hops in the aroma, but you can once you taste it. Great IPA for someone who isn't into IPA's and who doesn't enjoy that hoppy taste. Goes down smooth, with a pleasant aftertaste.

Ah, the old school sierra nevada ipa. Before I knew what an English IPA was I used to savage this beer to my friends, but eventually had an epiphany - it's not that bad. and I actually grew to really like it right as it was discontinued. Still, it was nothing super special: just an average EIPA in a style where almost all of them are just average

Beer served in a shaker pint, beer is amber and has a mild haze, nice white head, one finger, some retention, some lacing, moderate carbonation.

Beer is medium in body thins out on the end and finishes really bitter, strongly piny, very bitter, way too bitter for an English IPA but a decent beer, it is a shame this is being retired, oh well.