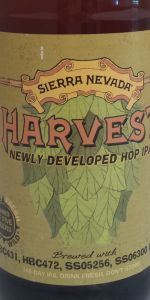 Man, you can really taste the HBC472 in here! Just kidding. Kudos to SN for experimenting with new resources. This is a well-balanced IPA. Nothing really stands out in this one, but that is okay. When using new experimental hops to pull off a drinkable an in-offensive product...not bad. Probably wouldn't pay again to be part of the experimental crew, but this beer was enjoyed.

I picked up a bottle of Sierra Nevada's Harvest Newly Developed Hop IPA yesterday for $5.99 at The Lager Mill. I was recommend this one and it sounded pretty interesting, so lets see how it goes. 2015 Vintage. Poured from a brown 24oz bottle into a snifter.

A- The label looks nice and it goes well with the name, but it isn't the most eye catching. It poured a nice golden orange color that took on more of an orange color when held to the light with a little over two fingers worth of creamy white head that died down to a thick ring that stayed till the end and it left some patchy lacing behind. This is a really nice looking beer, I have no complaints.

T- The taste seems to be similar to the aroma and it starts off with a medium amount of sweetness with the hops still being the first to show up and they impart that same unique hop profile that I got in the aroma with the tropical fruit aspects still sticking out the most. Up next comes just a slight bit of doughy yeast that leads into the malts which impart just a little more bready and light cracker like malt aspects than it did in the aroma. On the finish there's a lighter amount of medium bitterness with a fruity and dank hop aftertaste. This is a very nice tasting beer, I like the hop profile and the balance.

M- Smooth, crisp, a little creamy, slightly refreshing, medium bodied with a medium amount of carbonation. The mouthfeel was very nice and it worked great with this beer.

Overall I thought this was a very nice beer and I thought it was a really nice example of the style, the new hops show some promise and they made this beer stick out for the style. This beer had good drinkability, I drank the bottle fast than I thought I wouldn't and I wouldn't rule out drinking two of these. What I like the most about this beer was the hop profile and the balance, it was very hoppy, but i still could taste the malts. What i liked the least about this beer was nothing, there isn't a single thing that I would change, it's good just the way it is. I would for sure buy this beer again if I see it and I would recommend this to anyone who likes IPAs. All in all I was a little impressed with this beer, I always expect Sierra Nevada to make good hoppy beers, but this was a notch above usual and the unique hop profile set it apart. It's one of the better beers I've had from this brewery and it's one of the better IPA's that I've had recently. Good job guys, this is one tasty beer, thanks for making it.

A: Beautiful. Stunning, actually. Slightly hazy gold with a ton of effervescence and a massive, pillowy head. Almost perfect.

S: Very grassy and earthy. Actually, the earthen scents impart a very astringent oniony scent. Besides this, there's a lot of grass, herbs, and a smattering of grapefruit.

T: Grapefruit is more prominent, but the predominant flavors are grass, herbs, and onions.

O: Not a big fan of the overly-earthy IPA's, but this one was OK. Would have again.

Bottle from Albertsons. Musty, herbal aroma, pours out with huge fluffy head, lots of clumpy lacing. Taste favors the hops, but these varieties offer herbal , savory tastes and are not overly bitter. Light in terms of bitterness, big flavor.

An excellent brew with some really unique hops being showcased. I can only hope we see more use out of these super-experimental puppies! For 6.5, this IPA has some serious flavor, on par with many DIPAs on the market and for fans of 21st Amendment's Hop Crisis, this tastes like an oak-aged DIPA with like 2-3% less alcohol in it. Great depth of flavor for a somewhat sessionable brew. Loving this one right now, and I'll be going back to the store for a few more, I'm sure. Wish she came in 12pks.