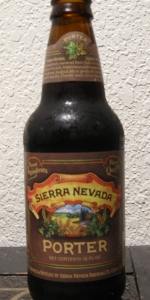 Notes: Porter is a testament to roasted malts which give it a rich, bittersweet and roasted coffee-like flavor that's a perfect complement to a variety of foods.

Before Sierra Nevada was a reality, our nights were spent perfecting homebrews and dreaming of starting a brewery. Back then, one of our favorites was a porter made with homemade malt roasted in our kitchen. Decades later, we still love the rich, bittersweet and roasted malt flavors of that original brew.

Taste - Heavy on the coffee tasting hop bitterness. That's about all I get. Not much chocolate or anything else you'd expect. Maybe a little cocoa. The bitter finish lasts and sits on the tongue.

Feel - Feels very carbonated and crisp. Not necessarily a good thing for me. I like this style to be silky.

Overall - Not to my liking compared to many other widely distributed porters. Not terrible though. I probably wouldn't get it again.

Poured from 12oz. bottle into snifter.

Initially bitter, taste becomes more complex towards finish. Leaves with notes of walnut, sunflower seed, toasted wheat. Great balance of bitter and malt with a diverse profile that improves as it warms.

Slightly sticky, medium-heavy with a little chewiness, smooth with a subtle prickle.

This is a great porter. While coffee is expected and noticeable in aroma and taste, there is an exciting malt profile that was unexpected from aroma alone. Rather filling, great in the winter. Recommend

Maybe I expected more based on the previous ratings. I prefer porters, to me this one seemed just average as nothing really stands out as exceptional with this beer.

L: Black with a big off white head. Excellent retention and lacing.

O: A decent porter. Worth trying!

Appearance: Pours a thick near-black with a one-finger tan-ish head that sticks around a long time. Pretty heavy carbonation.

Taste: Follows the nose with black coffee leading the way.

Overall: Really good porter from one of the brewers that repopularized the style in the United States. Hits all the right notes, and can pair with a meal or stand up on its own.

I have really come to enjoy Sierra Nevada's offerings. I haven't tried their Porter yet, but I'm about to cross that bridge!

Appearance : top notch, chocolate brown in the glass and beautiful cranberry red held up to the light. The head is thick and juicy, khaki colored and leaving tons of webbed lacing behind. Just awesome.

Taste : very heavy hop presence, followed by cocoa and roasted malts. The hop is dominant throughout the tasting. The finish is dry roasted Cocoa malts and more hop. The more I drink it the more I enjoy it.

Overall : a fine offering but way too much hop for my preference. It borders on Odell's Cutthroat, with its hop presence - but it is leagues better in my opinion. Nice cocoa and roasted notes, but lots of hop within a light to medium body.

Perhaps the last piece in the Porter puzzle comes from Sierra Nevada, a brewer I have long admired from afar in my home country of Oz-stralia. We know upfront that Sierra Nevada is well known for any beer with the words “pale” and “ale” in them, but how well do they approach the Porter style - with a slam-dunk like the equally-impressive-at-brewing-pale-ales Founders, or with a beer that is barely recognisable as a Porter like the example I just tried by Anchor? I suspect they’ll fall in between those two, but there is only one way to find out (aka ‘the fun part!’).

Poured from a 355ml bottle into a nonic pint.

A: Quite light, more like a hazed darkened Amber than the usual black/browns you would get from a Porter - that in itself is a worrying sign of things to come - with a 2 cm wispy off-white head that sticks around well. Way too light is the final verdict here. 6/10.

S: Aroma is definitely more in the Porter ball-park than Anchor’s offering - with a dusty chocolate, earthy coffee aroma, and some lingering coffee cherry notes. I scored the Anchor higher because I like molasses, and that had bags of it, whereas this aroma is more in the right direction it definitely is lacking some heft. 7/10.

T: The above aromas are present in the flavour (with some added camp-fire smokiness) however it never really lifts the game from the aroma and is most certainly lacking in the flavour department. To wit - I’ve had better Australian Porters/Stouts than this, and Australia is hardly a Mecca for Porters. 7/10.

M: Body is much better than the Anchor lot - with a mid to light, borderline medium body, light carbonation, eminently drinkable but not Founders smooth (not many beers are Founders smooth). 7/10.

D: Sierra Nevada’s least impressive beer? I can safely say “umm, sure, why not” I may be assassinated (beerlitically) for saying this but this is by far the worst SN brew I’ve had so far, however that isn’t saying too much as all their other brews have been so bloody brilliant, they just dropped the ball on this one as far as I’m concerned. I’m not overly disappointed though, there are plenty of awesome Porters out there and there’s little need for SN to fill this niche for me, as long as they keep up the standard they’ve been keeping with their Pale Ales and IPAs I will continue to be a happy man. 6/10.

Food match: Despite (or due to) being a watered-down version of a Porter this brew would work well at that most classic of backyard functions - the BBQ.

Overall - An outstanding porter; this one seems more balanced than a lot of other porters out there, which makes for a really sessionable brew. I'd have liked to see a tad more hop presence in this, but that is just a personal preference. This is right up there with the best American porters in my book.

It pours an extremely dark amber color and a small cream-colored foam with some bubbles.
Smell is poor, somethink like a decaf (mild coffe and some roasted malt)
Tastes like malts and coke, it's actually ok, but not very pleasant.
Feel is only good thing here; the beer is somewhat balanced and have a nice bitter end.

This isn't trying to do anything other than be a good, simple, satisfying porter. And it succeeds. Looks almost black, smells like roasted malt, tastes the same but with a slight bitterness that balances well, feels medium bodied. It's not so heavy so that I'm full after just one. For me this is a really stellar porter at a good price to enjoy on a chilly evening.

Poured from bottle into porter glass. First beer of evening.
This is the second Sierra Nevada beer I thought was overrated. (The other was an IPA.) Doesn't pour as dark as some other porters, head doesn't linger (lacy though), prominent cardboard taste. Meh, sorry.

Taste: Predominately roasty and bitter, the beer yields some light hints of pale malts, chocolate malts, and caramel. Almost nil sweetness which quickly fades away, leaving the roast, earthy bitterness to take us to the dry, roasty finish.

Drinkability: Just a tad thin, a tad simple, and just not what I'm really looking for in a porter. On to their stout!

This one confused me. It looks like a porter: nearly jet black with a white head and minimal lace; but the smell and taste are very hoppy. It's not that that's a bad thing, just unusual for the style. The hops aren't overpowering, but they do drown out what ought to be the standout feature of the beer: chocolate malt and sweet caramel. Overall, I found this porter to be too bitter, and for such a great brewery, I think they could have done a lot better.

A: Thin, creamy, khaki head that rides the side walls with heavy lacing. Mahogany core with a cola/syrup colored topside.

T: Black coffee. Very up front. A slight mocha on the back end. Almost oily, but not in viscosity.

M: Thin, but frothy. A great smoothness with a hoppy tingle to finish.

OVERALL: Very textbook. I want to give points for doing it right, but Sierra Nevada always hit their beer with hops, so I guess that is their signature in this one. I just wish they went a little more bold with other things in order to own this recipe. It's just too plain, but rather plain than screwed up, right?

NOTE: Live review.
(EDIT:) I wasn't able to finish the final two sips so I just rinsed my glass and called it a night at that point. The tingle got annoying.

A: Pours an extremely dark brown color with a huge dark tan head that slowly faded into a thick film leaving a ton of spotty patches of lace down the glass.
S: I get very integrated notes of roasted malts, light chocolate, toasted grains and a hint of nuts/wood.
T: Follows the nose with a dominating roasted grain/malt taste. Toasted nuts and chocolate come through in the finish, and the aftertaste has a touch of char and burnt wood. Very delicious.
M: The carbonation is perfectly balanced between being soft and chewy and light and fluffy. The body is medium-full and the mouthfeel is soft, smooth, and refreshing.
O: Early on in my beer drinking career, before I was reviewing and really got into craft, I bought a case of this beer. I loved it then but I don’t think I’ve had it since, until now. This is a truly underrated porter and beer in general. The drinkability of this is through the roof.

Medium bodied at best with some head retention. This has a gorgeous feel on the tongue. There's an almost smoothly truffly chocolate wrapped in velvet and silk texture and taste here. Real finesse to adding to the exceptional balance. Delicious. A perfect example of how tasty and beautiful a well made beer of average weight and alcohol can be.

Surely one of the best standard porters I have ever had. And I have had quite a few.

Poured into a pint glass from the 12 ounce bottle.

A- A two-finger head, frothy and persistent and chewy-looking with sticky lacing. The liquid is dark black with brown hues.

S- Not a ton going on here, sweet malt, chocolate and coffee.

T- Dark and sweet malts mesh here, some chocolate, and a slight bitterness and hint of hops at the finish. I also eventually detect some coffee flavor in there.

M- The beer starts creamy and thick and finishes dry and slightly bitter. It's a pleasant journey.

A solid brewski and an affordable one, thus one I could easily drink regularly.