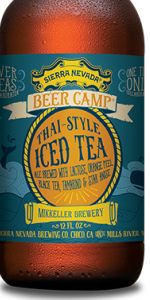 Notes: Denmark's Mikkeller brewery is famous for pushing the boundaries of beer, so when we decided to partner we knew the result would be a wild ride. This beer was inspired by flavors of a classic Thai Iced Tea. It;s sweet and rich, with warming spice notes and delicate fruit flavors that maintain a drinkability from the use of black tea in the finish.

Hazed orange color with strong effervescence and a fat finger of long-lasting, tan-tinted head. It eventually leaves rings of lacing, but only after a very long while.

Earthy, tea-like aroma with a distinct orange chocolate note that's probably the tamarind, as well as some slight cream. Not getting any anise to speak of in the smell.

There's a definite earthy bitterness to the taste, with all of the elements from the nose at least poking through, a distant citrus note and even a hint of the anise. There's an added creaminess as well from the lasting, cappuccino foam. A little spice lingers on the tongue in the aftertaste.

Medium bodied without much creaminess to the feel beyond what's added from the head. Decent carbonation brings out the spices more.

This is definitely a very unique, well-crafted beer. Just not sure that tamarind is really my jam. I give them high marks for delivering what's advertised on the label.

I am CANfounded as to what is going on with this beer's variety pack. SN has two breweries, one on each coast & yet when I got a text from one of my local bottle shops that it had arrived, they only got an allotment of four (4) 12-packs & they flew out while I was at work. 8=( Fortunately, the local grapevine put me onto a place with a stash & I bought two (2) 12-packs, one for me, the other for sharesies on The Porch at Chez Woody, which will be holding its seasonal grand opening this Friday, 16 June 2017.

From the bottle: "Overseas Collaborator"; "One Time Only Collaboration"; "Denmark's Mikkeller brewery is famous for pushing the boundaries of beer, so when we decided to partner we knew the result would be a wild ride. This beer was inspired by flavors of a classic Thai Iced Tea. It;s sweet and rich, with warming spice notes and delicate fruit flavors that maintain a drinkability from the use of black tea in the finish."

Much has been made of the order in which to drink the 12 (!) beers of this variety pack & I am now beginning to see the (slight) error of my ways. The Ginger Lager & the White IPA + this one are all getting set aside in my second (!) twelve-pack to take to my local BYOB sushi restaurant. I am still not decided on the order, but I am convinced that they will make a great accompaniment to dinner. I have not had either eel or octopus in a long while, so perhaps I shall revisit them as part of this exbeeriment.

The Pop! of this cap was followed by a very gentle pour & a vigorous in-glass swirl. I watched in increasing horror as the head rose up in furious anger and suddenly stopped at the top edge of the awaiting glass, forming just under three fingers of foamy, soapy, rocky, tawny head with moderate retention. Color was Amber to Deep Amber/Light Copper (SRM = > 9, < 13) with NE-quality clarity. Nose was a wild riot of orange citrus, black tea & licorice. Wow! Man, we pulled into Pattya Beach, Thailand in 1987 & I got turned onto iced Orange Pekoe Tea, usually with other adjunct flavorings. I had drank plenty of hot Orange Pekoe Tea when my Pops would cook oriental cuisine at home, but cold had never dawned on me until then. In 1993, we were at Camp Moscrip in Roosevelt Roads, P.R., cleaning up a ravaged Central Tool Room (CTR), following the previous battalion's deployment to Homestead, FL following Hurricane Andrew & I was spending a LOT of time outside. I began brewing up sun-brewed Orange Pekoe Tea, chilling it down & drinking it throughout the day for a caffeine rush & soon it caught on. Man, we were buying up jugs & tea at the commissary, making sun tea & selling it in cups like it was going out of style! Nothing like small-business logistics! The nose on this was a bit spicier than what we brewed, but man, was it evocative of those days. Warming, the anise/licorice began to assert itself & now, I was ready to drink! I took a nice slug of it in my mouth & let it roll around on my tongue to get the full effect. Mouthfeel was thin-to-medium, very light on the tongue. The taste was very mellow, very tea-like, with the orange peel & star anise just assertive enough to let me know that they were there, but not so much so as to overpower the delicate tea flavors. That was one of our early lessons: too much time in the sun & we would get a very bitter batch of tea. It still got sold, but we learned the right amount of time for it to sit before bringing it inside. We got there in March & this tasted like what we were producing in July. Tangy, spicy, but with a mellow tea presence. Oh, man. I suddenly have an urge to brew some sun tea this summer as a result. Finish was dry, due to the spices, but it was a refreshing dry, not a parching dry. Yeah, this is definitely going on the sushi dinner menu!

Taste was a little different than I expected. Wasn't sweet, was maltier than I thought it would be. Lacked a hop presence. Are you sure this isn't a Dogfish Head beer? Weird mix of off the cuff spice rack and shit. Citrus peel, licorice, moss. Some weird bitterness for not really being hopped. Unsweetened caramel in there just further confusing the palate. I can say I can't really think of a beer to compare this to, other than the 439 different weird beers DFH makes that are unique, but not really fun to drink. Here it is!

Poured from a 12oz bottle into a Newcastle glass.

Look is an amber orange with a thin white head.

Aroma is floral and fruity a little bit like a sweetened fruit tea from Starbucks.

Tast is pretty close to a sweetened tea. Not too clawing, just touches on it at the end.

Definitely not a beer I'd pick out usually, but in terms of nailing what they were going for I'd say they did it. The only reason I'm not hugely into this is I don't like sweet tea, but I bet if I put this in front of any GTL drinking person they'd enjoy it.

This beer pours a very clear pale amber with a smallish head. The aroma is very strongly tea-centric, with notes of brown sugar and lemon. The flavor is soft with creamy tocuhes - it really does taste like Thai iced tea, with herbal notes, and the anise coming though with a touch of bitterness at the end. Th mouthfeel is light and foamy. Overall this is a unique beer that I really love. I could easy see drinking to many of these on a hot day. Great if all the listed flavors excite you.

look - darker copper color with slight head and sticky lacing
smell - smells like tart cherry, might be because I let this age forever
taste - taste nothing like it smells. Tea with some orange in it
feel - medium body and light carbonation
Overall - the taste/smell just dont work out for me

Surprisingly malty, definite tea-influence, though this all makes some sense, as I always thought some overly malty/sweet beers (certain ESBs, for example) had a sweetened tea-like character. There's some spices in there too, piquant in a culinary way, almost evoking something more like Thai food than Thai drink. As with the Bruery collab, this is fine for what it is, but I'm far more interested in things like the Ayinger collab or Boneyard collab, rather than gastronomic experiments like this.

Is this what I want in a beer? The question repeats after sipping what might be the most refreshing remedy to the hottest of camp days. Chalky, grainy and mineral appearance. Nutty almond-joy aroma. Flavor interpreted as black licorice, perfume, and for what it's worth, tea petals. Is it authenticity?!?...idk. Just reminds me of strait sambuca--or, biscotti dripping with coffee. Feel of warm chamomile milk is surprisingly soothing. Is this what I want in a Thai-inspired beer? Is this a question I should be asking? Assuming they did their research then it's great, but I'd have a hard time selling it otherwise.

T: black tea from start to finish; mild bitterness at the end that is slightly astringent;