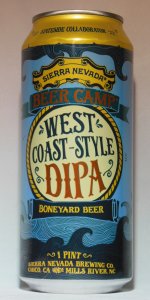 Notes: "We just love brewing hoppy beers" is the way Oregon's IPA masters at Boneyard Beer kicked off our collaboration talks. Well, as it turns out, we do, too, so we went all out on this intensely hop-heavy West Coast-style Double IPA. It's bright golden, crisp and brimming with intense citrus and herbal hop flavor, just how we like 'em.
View: Beers | Place Reviews
Reviews: 118 | Ratings: 358 | Log in to view all ratings and sort
Reviews by thebeers:

Big aroma of papaya and pine resin that give a creamy, tropical impression. A peppery, somewhat herbal note is in there as well. Smells great.

Unfortunately, the taste doesn't live up to the nose. Relatively little of the pine or tropical quality carry over. The peppery, herbal quality presents up front, but it's coupled with a surprisingly dry finish. There's also a pill-like bitterness.

It's on the lighter side of medium-bodied for the style, with a very little light creaminess and decent enough carbonation.

This beer presents great, but the chalky, pilly bitterness in place of any pine, citrus or tropicality knocks it down considerably for me. 4/26/17 canned on date.

Appearance - Pours crystal clear and bright golden orange in color with an off-white, two-finger width head. Fair retention, resulting in a thin, broken layer of surface suds and a fair ring around the edge of the glass.

Smell - Strong aroma, picked up from a foot or more away as soon as the the can was cracked. Orange, pineapple, grapefruit, black pepper spice, floral quality and just a hint of pine. Faint bready sweetness.

Taste - Follows the nose. Prominent citrus notes that hit on orange and grapefruit with lesser pineapple zing. Hints of papaya and passionfruit. Mid-taste brings a bit of spice and pine. Bready malts with a touch of caramel sweetness. Finish is grapefruit pith and just a touch more pine, then lingering pineapple in the aftertaste.

Mouthfeel - Medium-to-full in body with moderate carbonation. Drinks well enough before a bone dry finish. Not exactly the smoothest DIPA on the block.

Overall - Easily the best of the pack thus far, this one being my 5th of the 12. Nice punch of citrus, spice and tropical fruit hoppiness. If it were only a smoother drinker, it'd be a World Class effort.

The better of the 2 big name IPA collabs in this year's pack, the hops here snap better, giving pungent herbs + citrus, lots of hop oils, and a well attenuated, just enough malt to prop it all up body. A satisfying hop bomb.

Smells strongly of tropical fruit. Big scent of crushed pineapple. Lesser scent of passion fruit and plums. Smells a bit syrupy like a tropical drink in a Tiki club. Faint coconut and rum. This smells distinctly like a Maitai.

Starts out bittersweet and fruity with some burned sugar and caramel, like barbecued pineapple slices. Drys out and becomes a bit woody as you drink it. As the sweetness dissipates melon flavor appears. In the end it tastes like a tropical Barleywine.

I just can't mess with these west coast style pine/caramel bombs anymore; this is drinkable but far from pleasant.

Pours a beautiful clear golden amber with a foamy white head that recedes. Spotty lacing. Smells of grapefruit and very floral. Taste is dominated by Cascade like hoppiness: floral, earthy, some pine and grapefruit and a very mild biscuity sweetness. Feel is crisp, surprisingly light considering it's 8.2 weigh in, well carbonated, and almost balanced. Not face puckering bitter like I was expecting (hoping), but nice. Overall, this was a decent DIPA. 'Nuff said. Cheers!

First time I actually saw this beer camp variety 12-pack in stores. I had bought every one since 2012 at least, maybe 2011. Was hoping to find if for cheap at Costco, but couldn’t pass this one up for $22.99 at Trader Joe’s. Guessing it retails for $27.99 or so. Finally had my first Boneyard beers (both IPAs) at the Firestone Invitational in early-June and thought they were good (but not great), but that could have been the 25-something tasters I had before. Excited to finally review one of their beers. The bottle read, “"We just love brewing hoppy beers" is the way Oregon's IPA masters at Boneyard Beer kicked off our collaboration talks. Well, as it turns out, we do, too, so we went all out on this intensely hop-heavy West Coast-style Double IPA. It's bright golden, crisp and brimming with intense citrus and herbal hop flavor, just how we like 'em.”

Poured a gold semi-clear color with 3-to-4 fingers of rocky white head. Lots of bubble streams coming up from the bottom of the glass. Excellent foamy lacing. World-class thick, foamy retention. (Sight - 4.25)

Wow, can’t believe how good this DIPA was, even having it just over two months after it was packaged. Excellent. (Overall - 4.50)

Smelled pungent and vibrant which led to a optimistic initial start. First few sips had me fooled. But halfway in the staleness of the dank hops and cloying syrupyness of the malt began to taste like a poorly aged barleywine. The body was too heavy to be refreshing like an ipa/dipa should be. And the taste was anything but the vibrant, explosive, fresh picked nature that it should have been.