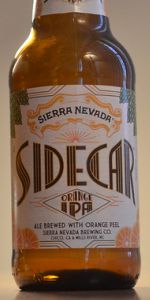 Notes: We pushed the complex and citrus-heavy flavors of hops to a new level with this orange-infused IPA. Combining bright and bold hops with real orange in the fermenter creates layers of citrus-crazy flavors, yet it maintains a balance and a crisp hop bite that make it the perfect aromatic IPA.
View: Beers | Place Reviews
Reviews: 84 | Ratings: 232 | Log in to view all ratings and sort
Reviews by Beer_Right_Back:

Just the vaguest hint of orange peel is found in this beer, and the remaining IPA flavors don't really stack up to even its counterparts at Sierra Nevada. A meeker offering from them for sure.

clear, light golden color, white head. citrusy aroma, obviously mostly orange. but some grassy and piney undertones in there too. taste leans fruity too, but maybe not as strong as I expected, in a good way. well balanced, not overpowering. thinner bodied, easy drinking on a hot day.

Clear amber colored with a moderate head that dissipated rather slowly. Moderate lacing. Very pleasant sweet, citrus-fruit aroma. The taste is slightly peppery. I do detect orange favor and a nice level of bitterness. Also, somewhat dry. A smooth and creamy feel. A very crushable beer in spite of it's 6.8 ABV!

The aroma is largely orange and some tropical fruit.

As previous reviewers have stated, this one simply has too much orange flavor - i.e. orange rind without any other flavors coming to the fore. It is certainly crisp and refreshing on the palate, but the flavor almost borders on an artificial orange flavor. I recall enjoying the Sidecar Pale Ale much more.

Very nice mouthfeel with a creamy palate and a fairly nice lingering bitterness, at least after the orange dissipates.

To me, this was a rare miss by Sierra Nevada.

Notes via stream of consciousness: This is not my first Sidecar Orange IPA but I don't always review beers if I'm enjoying them so I've let this one go until now. This is a bottle and I've had it bottled and on tap and didn't notice a difference. It's poured a hazy golden orange body beneath a standard sized head of off-white foam. The aroma is not surprisingly of orange. It's not bright and juicy like you'll find in some of the new New England-style IPAs but it's pleasant enough. The flavor offers the same orange flavor, via orange peel, atop a grainy malt base. Some citrusy hops must be contributing here as it's a little more complex than just orange, but the orange comes through nicely. It's medium bodied and crisp, and a median bitterness of 35 IBUs balances it and brings it to a dry, just slightly acidic, citrusy finish - very refreshing! Overall it's probably not the best IPA that Sierra Nevada makes but it is unique, and quite drinkable. Worth trying.
Review# 6,148

Pours a clear gold with a finger of foam, excellent lacing.

It smells of orange zest, earthy malt, biscuit, hint of tartness which I reckon, I must be imagining.

Orange zest and perhaps what I'd call orange dankness in the taste. Earthy and biscuit malt, light bitterness, lighter sweetness. I can say that the flavours don't exactly agree with me.

Good mouthfeel until the finish where it gets a bit scratchy for me.

Bought as a single, thank goodness.

I have to admit that this one brought a bit of a smile to my face. If you are coming late to this party, then you may not be aware that I am a retired US Navy sailor. My fourth command & third ship was a Pre-Commissioning unit, the USS Normandy (CG-60), being built in Bath, ME where I met up with it. I was coming off of shore duty where I had been a member of the base Auxiliary Security Force (ASF) & I had been trained up as a cop. My watch group (Section 8 - "The 8-balls") was the last to form up & where the others had been mostly gung-ho volunteers, we were ordered in by our various commands. By sheer happenstance, a few of us decided to make the best of it & not only did well, but we got sent TAD to Quantico for a week of FamFire hooting. Have you seen "Gunny Time"? That was us for a week! Well, when I got to the mighty Norm D., we were still forming up the crew & they were short on Gunner's Mates (Guns) (GMGs) & one look in my service record was all that it took. I was designated to be a Browning .50-calibre machine gunner, starboard side, 02 level! It not only pulled me away from Supply Department, Repair Parts (S-1) Division, but it made me a part of Combat Systems, meaning that I answered to many bosses + I had shipmates outside of my Dept/Div. It didn't take long with the gunners until I became a part of the rootin'-est, tootin'-est buncha rabble-rousers that I had ever encountered! Small arms were a way of life & lawlessness was our way of doing business. We became the S.D.B.G. & I am convinced that ha we all retired near one another, we would have been a real-life S.O.A. Here's the thing - I don't drive. Never had a license & never will. I was always shotgun on patrol & I still call out "Clear right!" at intersections. PA will not allow you to have a Class "M" license without a Class "C" (passenger) first, leaving me high & dry. In the meantime, the SDBG has been dying off at a tremendous rate, much younger than we should, from a combo of natural causes & suicides. It has made the remainder of us contemplate a reunion, perhaps in Knob Creek, KY for the semi-annual Night Shoot (Google THAT!) or MKE/CHI as a centrally-located locale. Most want to ride their bikes, all sporting personalized "SDBG" plates, but that leaves me high & dry. My solution? A sidecar! It has become a running joke among us as a) no one owns one & b) they don't seem to be manufactured any more. 8=( If anyone has a line on a serviceable one, let me know!

From the Bottle: "Ale brewed with orange peel"; "We pushed the complex and citrus-heavy flavors of hops to a new level with this orange-infused IPA. Combining bright and bold hops with real orange in the fermenter creates layers of citrus-crazy flavors, yet it maintains a balance and a crisp hop bite that make it the perfect aromatic IPA."; "We brew in Chico, CA, and Mills River, NC, to bring you the finest quality beer."

Once again, I was confronted with a "Fresh Seal Cap" that directed me to "Use Bottle Opener". Pop! a cap?!? Heck, yes! How are women & guns alike? Keep one around long enough & you're bound to want to shoot it. Having Pop!ped this particular cap, I went with a vigorous C-line pour that brought forth just under two fingers of dense, foamy, rocky, tawny head with good retention, leaving moderate lacing behind. Color was a deeply-hazy/lightly-cloudy Golden-Amber (SRM = > 5, < 7). Perhaps too much unfiltered orange peel? Nose smelled like liquified orange marmalade infused with hops! PNW hops, to be exact. Imagine one of those gummy orange slices in your mouth with a gummy mint leaf, washed down with grapefruit juice. Now, we're talking! Mouthfeel as medium. The taste mirrored the nose & I was really sent. This was one to savor & I envisioned it with lemon chicken, duck a l'orange, various sushi & a number of other dishes. Dang! Mmm. There are a LOT of BYOB places in town & this would be a welcome accompaniment. Finish was dry, but a citrusy dry, rather than bitter dry. Mmm.

Bottle from variety pack. It poured a 1/2” head, light honey but slightly cloudy color and surprisingly little aroma since it’s marketed as an orange IPA. It tasted very smooth, well crafted and I barely noticed a citrus flavor (which I prefer). The only con was that alcohol was one of the predominant flavors. Overall a very good beer.

12oz bottled 3-22-18 (2018 Party Pack)
Deep golden color, clear/clean, with a 1/2" white head on top. Head falls quickly to a solid cap and hangs there.
Nose is full of weedy hops and a hint of orange over sweet malts. All fresh and clean.
Floral flavors early followed by oranges late. Orange blossom. A sweet light malt base carries the hop/fruit peel flavors.
Bright. Clean mouthfeel, light to medium body and good carbonation.
Good stuff, flavorful and refreshing...6.8% is hard to detect.

Poured into a stemless glass.

A: Body is crystanille yellow showing a minimal white head that presents little to know retention.
S: Aroma is very powerful in tangerine, grapefruit, orange.
T: Taste starts with a very powerful tangerine like (I know the label states orange peel but it does taste a lot more like tangerine), moving on to a somewhat empty flavor only that only beats for a small note of hop.
M: Body is medium. Carbonation is medium to low. Alcohol is unnoticeable. Bitterness is medium.
O: Though it doesn't taste bad, I'd see this as a sub-par beer.

Hazy deep gold with a one finger head that laced the glass nicely. Definitely smelling the orange peel in the aroma. Taste has the same plus what I perceive as some mild grapefruit in the middle..I getting some Tang chalkiness on the finish..Hmm. Refreshing nonetheless. Good body with active bubbles throughout..Interesting IPA.