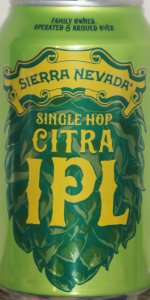 Pours the most familiar of all beer industry standards, the golden pour with good clarity. Head wasn't much for retention, but it was white in color and like the bobber in the pond going up down. Aroma was more Citra hop than lager yeast. Significantly more. Some IPL yeasts be all like "I'm here, I'm loud and proud," but this one was in the closet, just didn't reveal itself so much. Leaned on lemon just as much as grapefruit and orange.

Taste kept with the nose, imparting an amount of lemon generally not accustomed to in hoppy beers compared with say, wild ales. Perhaps lemongrass is a better descriptor. Mouth feel has a bitterness level that seems restrained for Sierra Nevada's core hoppy beers. Malt aspect is minimal and appropriate. There was a slight reveal of the lager yeast in the taste, but its pretty tame compared to the sulphuric and skunky ones my weird ass prefers.

Its a good enough beer, especially in the warmer months.

T: follows the nose from start to finish; mild to moderate bitterness at the w;

O: not enough aroma and flavor to stand out;

Welcome back to my New Sierra Nevada (& Maybe Some Others) Beer Sunday (Week 727)! My mother owns a house in Chico, I scored these at the Friendly Greek Bottle Shop (FGBS) & now, I am anxious to delve deeply into them!

From the CAN: "Family Owned, Operated & Argued Over". Ha!

I Crack!ed open the vent & decided to invoke my ex-Old Lady, she of the micro-mini kilt who once admonished me that an inverted Glug was going to make a giant mess in her kitchen. Man, did I ever get some head! Off the beer, jagov - she's another story. It looked like a soft serve vanilla ice cream cone! It formed a giant puffy mound equivalent to three-plus fingers of dense, foamy, rocky, bone-white head with excellent retention that ended up leaving loads o' lacing in its wake. Color was an oh-so-slightly-hazy Straw-Yellow (SRM = > 2, < 4). Nose smelled like summer - grassy, mown hay, freshly-squeezed lemonade, a loaf of bread directly from the oven … Ahhh. Mouthfeel was medium-to-full, not quite creamy, but definitely BIG for a Lager. The taste was more like a Czech Pils than a simple AmeriCAN Lager! It was very juicy, grassy & bready. Easy peasy, lemon squeezy! Yummy yummy. Man, this was simply crushable. I CAN see putting a case of this in my cooler when headed to the beach this summer! It made me want to dance, prance & take a ChANce. Mmm. Mark yer CANendars - THIS Friday (01 Febrewary, annually) is Hula in the Coola Day! Put something in yer cooler that will make you happy & want to dance the Hula, especially if it's from a CAN. Finish was dry, not Brut dry, but teasingly, ticklingly, Tango-inducing dry. It made me weep when the last drops went down my throat! It was like the last kiss from a departing lover. As usual, YMMV.

Taste: Smooth and hoppy but still detectably a lager. No bitterness, plenty of malts. An ideal hoppy IPL.

The aroma is sweet perfumey vegetal malts and fruit.

The flavor is sweet sugary perfumey fruits and grainy malt with a dry finish that doesn't have much hop flavor. The mouthfeel is medium to full bodied with smooth carbonation.

Overall, it's a bit of a mess.

Clear golden brew with plenty of very white foam in the Stella goblet. Light and spritzy with some malty substance. Aromatic with something flowery, straw, and a hint of lime peel. Sharp and mildly resiny with a little astringency in the aftertaste.

This is not overly bitter but the hop fragrance lasts nicely. It seems like a good compromise for a hoppy beer on the lighter side. From the 12 oz can in the hop pack. All have been very interesting and drinkable brews.

Brilliantly clear bright yellow color with a dense white head. Citra hops are evident on the nose, and so is the lager yeast.

The Citra hops also dominate the taste, but the lager characteristics with the yeast and malt are very apparent. This is really well done, IMHO.

Taste: Bready lager body with mild citrus hits at the start and in the finish.

Overall: Beer 1 of the Sierra Nevada hop pack, even at 3+ months old there's plenty of hop goodness. This is a nice, easy drinking lager with a little more citrus kick than your typical lager.

these single hop beers are cool from sierra, who hasnt really kept the innovation pedal down much, its nice to see some new beers from them coming through. this is a sturdy lager, not nearly as pale or light as we are used to in the style, a bit more of the classic crystal malt we know these guys for, which heavies this up a little bit, but i think also allows for a more robust and well rounded hop profile from the citra, letting some bitterness not be distracting and giving us a pretty full spectrum citra experience, a nicely crafted beer in that respect, just maybe without the drinkability i look for in these. i get a lemony freshness from the hops, and i get some character from the lager yeast right away, neat together, and then some floral element when i taste it, an early flavor peak though, and it fades out malty and almost over balanced to me, less of the dry hopped citra goodness on the back end, but the beer is fresh and satisfying by any measure. nice carbonation and a good briskness as a lager despite the somewhat bigger malt complexion. minerals, pine, and citra fruitiness finish it off. solid beer, not going to change the world or anything, but this is squarely in their wheelhouse and they did a nice job with it overall. looking forward to trying the others.

Appearance: A clear golden straw yellow colour with a two finger white head that had decent retention and left some nice lacing.

Overall: Quite nice and refreshing with good citrus notes and bitterness.

poured into Spiegelau IPA glass. from can packaged 9/5/18
Look: pours lovely straw color with 3/4" white frothy head with average retention. clear as blue sky
Smell: intense citrus along with lemongrass. lime zest, fresh cut grass. light biscuity malts.
Taste: light on sweetness, strong to intense on the citrus, even with some acidity. Bitterness is there but arrives late to the party. when it does it hits the palate pretty strongly.
Feel: medium body, moderate carbonation and subdued astringency (yeah...). texture is almost rich. Finish is all about lingering bitterness and not always pleasant citrusy thing going on.
Overall: I love IPAs. I have liked (even) very few IPLs. this is no exception. disappointing. just weird with all this unbalanced citrusy flavors and acidity (too lemony). I will give it another try at some point since I have a few of these.

Look - pale copper color with a big lasting head. Really looks like a cross between a lager and an ipa
Smell - grainy with a squeeze of lemon and some herbal
Taste - a lot like the scent, grainy with slight lemon maybe a little pepper. bitter aftertaste
Feel - Medium full body with a creaminess and medium crisp carb
Overall - pretty good not a little to grainy

aroma is pretty mild, kind of a strawish malt

taste is pure hops, has that citra astringency and light malt. easy to drink and not a bad beer by any means

12oz canned 8-1-18
Huge pillowy 2" head with amazing retention on a straw gold crystal clear beer...looks great. Thick lacing.
Zesty lime / lime peel and oil. Green leafy aroma. Lots of lime.
Clean malty base with a load of lime on top...again zesty is the word I'm coming up with. Hint of sweet hay / grass in the finish.
Crisp, clean as it should be - between light and medium bodied. Good carbonation...light lingering bitterness. Clean, dry finish.
I seem to like this a little better than the previous 5 ratings, goes to show a lot of this is subjective to the individual taster.

Appearance: The beer has a very slight hazy appearance but otherwise it looks fantastic with its pale gold body and its rocky white large head. It has very good retention and lacing. As a whole it is picture perfect in a glass.

Aroma: It has a slight onion and garlic aroma with a bit of rosemary. It is very herbaceous and enticing. I pick up a bit of a meaty yeast aroma which is a bit off-putting, but fortunately the hops tend to overpower it.

Taste: Up front there is this tangy flavor which doesn't fit. Then there is this slight bit of bandaid and it all starts to fall apart from there, compounded by this awkward bitterness.

Mouthfeel: The beer has a very good mouthfeel. It has a good bitterness with a crisp finish. Aside from the flavor the finish is also very clean.

Overall: It's hard to tell exactly what went wrong with this beer...perhaps it was left on the yeast too long? The hops seem to be on point and the character of the beer, as far as the mouthfeel and appearance of the beer are concerned, are good, but the flavor seems to be a train-wreck. The overall experience of the beer doesn't make me want to try it again. It reminds me of a book that was written by three great authors and one terrible one.

Impression from a can nabbed as part of the Sierra Nevada hop pack (2018).

Pours a clear vibrant yellow-gold body and a frothy albeit thin white head.

Aroma hints at grass and pale malts, with only faint suggestions of Citra coming through. Herb and fresh hewn grass are evident, but it lacks fresh citrus and even vague fruit. Doesn't promise an IPL that showcases Citra well, but it's certainly generally appealing. Smells more like an American (over-)hopped pils than anything else. Aromatic intensity is low.

TASTE: Meets the meagre expectations created by the aroma. Grassy particularly up front, with a crisp pilsner malt and 2-row backbone keeping it refreshing and approachable. There's not a lot of flavour here, and I'd never guess Citra was imparting this herbal grassy hop flavour...I guess it's an interesting beer in the sense that it coaxes out of Citra only its least interesting possible notes.

OVERALL: More overhopped pilsner than IPL proper, failing to commit to the one hop the brewers selected. Even Sierra Nevada Pale Ale has more hop wallop than this, but I could see those who find pale ales too bitter enjoying this as a stepping stone beer from premium lagers. Faultless but underwhelming, Single Hop Citra IPL is neither for Citra hop lovers nor IPL lovers and will fail to dazzle discerning drinkers but I can't imagine any beer fan would really dislike it.

The highlight for me is its drinkability; this would pair wonderfully with food and I could see myself taking down a good 3 or 4 cans in a sitting.