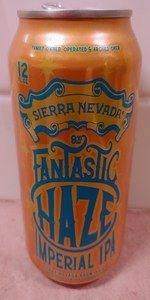 Notes: We were in search of something fantastic. Something juicy, something hazy, something ripe with notes of mango, melon and citrus. So we said, "Reason be damned," and filled our kettles with five hop varieties and loads of malt, oats and wheat. Some may call that absurd. We call it absurdly fantastic.

When Don "Joe Sixpack" Russell interviewed me about my prolific use of site partner, Untappd, he presciently asked if their site/app had ChANged my drinking habits. My CANswer? Of course! I would NEVER have drank as many ciders & their limited time badges are often the impetus for me to pull beers out of the queue & give them head-of-the-line status. What does this have to do with the cost of the Coronavirus in China? This is an example, plus it furthers The CANQuest (tm), which is a double-plus bonus!

From the CAN: "Family Owned, Operated & Argued Over"; "Imperial IPA".

Hmm. This site has it as an NEIPA, but the CAN identifies it as an AIIPA/ADIPA. All bets are off!

I beCAN by Crack!ing open the vent & beginning a slow, gentle C-Line Glug that lasted until I realized that any hope of clarity was futile. I then allowed it to flow freely until the CANtents had been CANpletely emptied into the awaiting glass. This resulted in the formation of nearly two fingers of dense, foamy, rocky, eggshell-white head with very good retention, leaving a load of lacing in its wake. Nose CANtained an interesting mélange of fruits, from tropical mango, papaya & pineapple to citrusy orange/tangerine as well as a pleasant pine mintiness. 8=O Mouthfeel was Medium-to-full, not quite creamy, but on the approach. This is less impactful in an NEIPA as an ADIPA/AIIPA so fair dinkum there. The pine mintiness was like a hit of menthol on the initial sip, slowly subsiding to allow the fruits to become more assertive. The tropicals were the first to emerge, followed by the citrus fruits. Finish was cool, dry, minty & very refreshing. It was dangerously drinkable, but should be CANsidered a "sipper" as noted by Bro. @Jason in his review. YMMV.

The peach colored cloudy body was very similar to orange juice in looks. The smell was full of citrus fruits and was oddly stronger at arm's length than close by, where it got masked by the carbonation. The taste was very citric, evoking grapefruit and tangerine, with a bitterness reminiscent of biting into the pith. The finish was tangy and short, and mouthfeel soft. The alcohol was very well hidden, Nice DIPA in the New England style from the reliable Sierra Nevada.

12 oz can poured into a shaker pint.

Sweet rotten fruit aromas boom off of this....uh oh... disturbing... I actually had to open another to make sure I didn't get a bad can but...no...no...that's what it smells like...overly ripe sickly sweet fruit.

And the flavors follow suits... super sweet mangoes...not in a good way.... looked good in the glass but that's the best aspect of the beer... hot...boozy...sweet... damnit, I wanted to like this as i can usually get SN stuff reasonably fresh and I know this is a year round offering...

Orange yellow in color with a nice 1/2 inch of froth. Not so much haze as it has a ton of floaties throughout the glass. Smell is kind of subdued moderate pine fruity hops sweet pear and papaya hops. Flavor is excellent no ethanol taste smooth hop bitterness well rounded finish. Body is pretty middle row medium which is very nice for the ABV

Overall much pleasant than Hop Bullet but at a higher ABV whats not to love?

Cans dated 06 Dec 2019. Nice flavor. Has the requisite 'juiciness' for the style. ABV is very well hidden. Very drinkable (and dangerously so). I enjoyed this more than HLT but ymmv (and I appreciate one is 9% and the other is 6.7%). A really solid beer from SN. I realize price is not a factor in the score but 11.99 for a sixer of this 9% beer is as good as it gets.

Honeydew melon, cantaloupe, mango, and orange on the aroma.

The palate follows. Honeydew melon, cantaloupe, mango, and orange. Biscuit malt. A touch of orange peel bitterness on the finish, but it does not linger. No hint of alcohol whatsoever.

A bit more bite than I like in my Hazy. Not super hoppy, Nice orange flavor up front that get bitter rather quick. Nice beer but not a must have.

Pours an orange-amber color, opaque but not really hazy looking. Fluffy white head with substantial lacing. Soft, hoppy nose, not much there. Resinous, bitter hops prevail in the taste which finishes on the sweet side, creamy mouthfeel. ABV seems fairly well hidden but detectable. I would find it difficult to drink more than one of these in an evening but it's definitely worth trying.

Poured from can into tulip, good 2+ finger off white head, great retention and lacing. Hazy golden in the glass. Smells of orange, pine and ripe pineapple. Taste is initially sweet malt giving way to orange juice, pineapple, caramel and finishes with a mild bitterness. There is a sharp alcohol hit on the end, not unpleasant, but there letting you know that this one packs some heat. Gets off the palate pretty quick so it doesn't suffer that cloying sweetness that comes with some of these NEIPA's

Poured this can of Haze into a tulip and there was light carbonation but not a lot of lacing. Color was golden and hazy of course. I got more of a mango /malt aroma than of any hops. Taste is malty at first but finishes with a bite of alcoholic on the back end, not unpleasant but it lets you know it has some oomph to it. Mouthfeel is not thin but not overly sweet like a lot of Imperial IPAs which is a good thing. Overall I bought a sixer of cans and am enjoying them and feel they have a good if not almost great beer. If there is one thing I could improve in this beer is the hop aroma possibly during biotransformation on active fermentation and more generous dry hopping. Cheers!