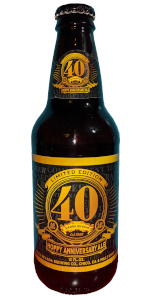 Notes: Hop-forward beers weren’t popular when we started brewing in 1980. But we loved them, and we knew that if we were going to open a brewery, we’d better make something distinctive. It’s been 40 years since then, and we’re still brewing what we love. This beer showcases the bold flavors and aromas of a classic West Coast IPA: intense pine and citrus with a deep gold color and slight caramel sweetness. Here’s to following your passion, and to the next 40 years.
View: Beers | Place Reviews
Reviews: 212 | Ratings: 517 | Log in to view all ratings and sort
Reviews by NeroFiddled:

Notes via stream of consciousness: It's hazy with visible particulate in suspension, but I'll take the credit for that as it's taken me so long to get to this, and I jostled it by driving it into work with me. It most likely would not have sedimented out but you never know. The head is a stoic finger's-width cap of off-white foam. In the nose it's not that much different than I recall their pale ale being. It's citrusy, piney, otherwise fruity with some mild apple, and just a touch malty. On to the taste... it's exactly as you'd expect it to be given the aroma. It's malty but not overly so with bready, biscuity, and gently caramelish notes. The citrus isn't really clear (some orange, some grapefruit), but you get it, and the piney notes are soft and round rather than sharp and raspy. It's got 65 IBUs according to the label but it doesn't come off like that. It's smooth and balanced, seeming more like 50 to me. I'm about halfway through the glass now and I've still got a solid head on it, albeit shorter, and there are beautiful rings of lace interwoven into a fuller curtain that covers everything up to where it first began. Finally, mouthfeel... I'm going to call it medium bodied and crisp. So, what to say about this? Well there's certainly no new ground covered here. It's stronger than their pale ale, fuller, and more hoppy but not really all that different. They've certainly made hoppier beers, and stronger ones as well. I'm not sure why they've opted for this as their 40th anniversary beer other than A) they don't really see a need to put anything bigger on the shelves as there's so much out there already and everyone's going to buy it anyway, or B) to a certain extent it represents everything that Sierra Nevada is known for (balance, roundness, focus, restrained but satisfying delivery). Looking at it just for the beer that it is, I'd put it right up there with some of their best.
Review #6,980

An expert's blend of a pale ale and an IPA with a good dry finish. Not super hoppy, bitter, or piney- but a great blend. You can enjoy 1, or 6+. Happy Anniversary Sierra Nevada. Here is to you making great beers for another 40 years.

Copper colored with fine sediment suspended within the body. There’s an inch of frothy and rocky beige to off white. The aroma is of piney hops and faint honey. I’m tasting a very restrained pine and light, crackery malt flavor profile. The mouth is lightly chewy, sticky, and dry.

Interesting is the best way to describe this beer. Love the color, as if has gold, orange, copper, and bronze hues, very clear with slight head and lacing. Smell is the weakest part-has a Brett/funkiness I certainly wasn’t expecting. Honestly, part of me worried I got a bad batch. Taste is interesting-hoppy, lemony, slightly bitter, a bit of pine and a bit of citrus. Feel may be as good as appearance. Medium bodied, crisp, clean, slightly dry finish, definite alcohol presence. It’s not great, but it’s darn enjoyable drinking. I’ve bought a lot of beer this last month, and I’ll say two things for this six pack: one, I’m damn glad I bought it, and two, I’m damn glad I’m not sharing this one like I did with some of the other purchases.

Pours a deep gold with a strong, long lasting head of foam. Lacing is super good.

Smells of pine, citrus, quite hoppy with some noted bitterness.

Quite hoppy up front with notes of pine and grapefruit citrus, some toasted malt mid palate, finish has some caramel sweetness. And of course, that's mixed with a good dose of bitterness.

Body is perfect. Oh, now I'm getting some slickness reminiscent of hop oils.
That could just be me.

Wonderful beer for a 40th Anniversary!!

Picked up a six pack at Kroger’s. Poured into sniffer from three floyds. Poured a bright amber with nice lacing. Smell is some grapefruit and pine. Taste follows suit. Not the hazy fruity IPA’s that seem to be dominating the new beer market. This does seem like a throwback to what made Sierra Nevada great. If you love their pale ale and celebration ale you will like this. After 40 years they are still creative but stying close to their roots for this one. Cheers to 2020 and the next 40 years!

Pours a wonderful amber-hued golden color with a off-white fluffy/rocky head. Aroma is pine and grapefruit, with very light grassy/vegetal notes. Taste is light pine, baked bread, and slight hop bitterness. Not overly bitter, and very balanced. This is like a toned down west coast ipa, almost like SN pale, but more robust. Mouthfeel is light to medium, with some carbonation tingle. Overall, a worthy 40th Anniversary brew from one of the best out there.

Cooper color on the pour with a thin head and some lacing. Aroma is piney and earthy. Taste is combo of grapefruit and citrus peel, and pine. Medium in body, with plenty of carbonation and finish is dry. A very good brew....

Great brewery. Always puts the bottling date where you can see it. 01/02/20
Deep clear gold....not another one of those ubiquitous hazy abominations.
Nice creamy head.

Piney, clean, at 6%, light enough to drink a few. Just right.
I'll be having a few more of these before they're gone.

Aside: there's a commentary on the label about how IPAs weren't as big back 40 years ago as now.
But here we are, watching the IPA being turned into a sad joke with juicy, and hazy, and brut, and whatever novel crap is coming next.

12oz pkgd 01/16/20. Crystal clear off-amber with soda white foam. Aroma isn't much, but flavor has a very much classic pine hop resin combined with just a bit of biscuity malt. Surprisingly balanced and clean for a Sierra Nevada.

LOOKS: A rich, golden, and slightly hazy brew. Large, off white, foam, that sticks around and leaves a thick lacing.
AROMA: Citrus; lots of lemon peel, and caramel sweetness. Touch of pine.
TASTE: Lots of caramel malt, but, balanced nicely with citrus and pine. Very pleasant building bitterness in the back of the palate.
FEEL: Well carbonated, medium-ish body, a little oily up front, and drying a bit on the finish.
OA: Nice overall flavor on this one. Very well balanced between hops and malts.

Pours a pale Amber with a cream colored head that leaves some nice lace.

Taste is flowery and citrus with a chewy bread malt backbone. A solid and distinct IPA.

A: A honey yellow amber with lots of chunks floating around. There is a nice white head on top.

S: Heavy on the grapefruit and citrus aromas, perhaps a hint of spice as well.

T: Citrus peel, a hint of pine, and perhaps a little earthy.

M: Medium light in body, with plenty of carbonation. Finish is somewhat dry.

O: Overall nice, but pretty inline whit the beers they make already. I guess this is probably their intention. Celebrating what makes Sierra Nevada tick, and have it be available to everyone. I still wish there was a little more oomph.

Poured from the bottle into a Spiegelau IPA glass. Packaged Dec 10th 2019

Aroma is very subtle if a bit closed also. Minimal light hop sense on the nose, posibly a touch of earth and citrus but hard to pinpoint. Not much sense of malt character here either strangely.

Palate is decent but slightly absent. Minimal (again) sensing hop character, with a bit of juicy texture but not flavor. Light bodied pine with an almost session flavor of light orange bitteness and sweetness. Finishes light bodied, with a faint touch of sweet mint herbality.

I loved this beer.

Solid piney IPA with a touch of citrus. Old school style and perfect for the 40th anniversary beer. SN is the master of hops. Cannot wait till 50th.