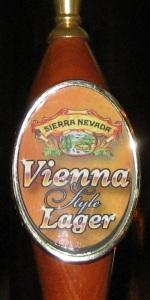 Notes: Vienna-style beers are among the world’s first light-colored lagers and were on the brink of extinction until American craft brewers helped revive the style; it’s a good thing they did. These delicate and extremely balanced amber beers rely on semi-sweet and bready malt flavors but walk a fine line with both malt and hop character shouldering equal weight. Our take on the style features whole-cone European hops, which add to the dry finish.
View: Beers | Place Reviews
Reviews: 208 | Ratings: 929 | Log in to view all ratings and sort
Reviews by CMOrak:

Appearance: Pours a beautiful, golden, amber color with a quarter of a finger of white-colored head that quickly dissolved away into a thin lacing of foam that completely covered the top of the beer.

Mouthfeel: Medium-bodied, crisp and very effervescent as there is a lot of carbonation to tickle the taste buds. With an ABV of 5.3%, there is no alcohol on the palate.

Overall: Wow! What an exceptional American-version of a Vienna lager! One of the best I’ve had in fact. It’s definitely up there with Devil’s Backbone’s Vienna Lager, which is my favorite American-made Vienna Lager. It’s Malty, slightly sweet and beautifully balanced with floral, piney, hops. Sierra Nevada’s knocked this one out of the park!

Smell is bready and sweet. Goes down super smooth with just a faint spiciness. This was in the SN fall sampler and I can see why, it's delicious and could be an everyday beer when the temps start to drop a bit. Just a touch of caramel stickiness at the end.

Poured from 12oz bottle into glass, from the Fall Pack. Bottled on '07/25/18 06:36'.
Clear, pale amber colored body. Skiff of head upon pouring disappears quickly and leaves some remnants and a very thin ring, fed by bubbles. No lacing.
Aroma of slightly sweet bready malts. Floral hops add in.
Taste is slightly roasted, bready malts, and slightly spicy, floral hops. Well balanced, with an enveloping flavor profile.
Medium mouth feel, with lager sharpness. Lower carbonation. Drier finish (but that just entices another sip).
Such a beautiful visual presentation of a beer, with a fuller than expected mouth feel, not that much from aroma, but a full mouth experience of balanced and rich flavors. Really a great example of professional brewing.

Served in a tumbler.

This here wedding is winding down, and there's some Sierra Nevada at the hotel. Let's get some, eh? This stuff pours a clear bronze-copper topped by a finger of off-white foam. The nose comprises sweet biscuit malt, light dried honey, a twang of mild sweetgrass, and sweet flowers. The taste brings in more of the same, the relatively mild sweetness of the malt balancing very nicely with the floral, lightly-grassy hops. The body is a light medium, with a light moderate carbonation and a dry-ish finish. Overall, a very strong Vienna lager, one that's far too easy to drink for its own good (or, rather, mine). Quite the pleasant cap to a wonderful day.

"Vienna-style lagers were on the brink of extinction until American craft brewers helped revive the style. It's a good thing they did. These delicate beers lean on light and bready malt flavors, but walk a fine, balanced line with whole-cone European hops contributing a dry finish." Brewed in the style of a German Vienna Lager. Previously available as a taproom exclusive, packaged in 12 oz. bottles exclusively for the Fall variety 12 pack.

Poured from a 12 oz. bottle to a Sierra Nevada pint glass. Served above 52 degrees Fahrenheit.

(Appearance) The beer pours a crisp, frothy head of a biscuity gold-white color over an orange-amber body with very high clarity, mild haze and moderate carbonation. Retention is above average and lacing is light and spotty. 3.5

(Smell) Aromas of docile bready malt, a mild biscuity body form the clean, approachable malt build. Digging deeper, faint notes of earthy, spicy hops produce a simple balance of aroma with mild bitterness, but it's plenty to counter the malt aroma at this stage, which airs to the simpler side of beer. The potency is low. 3.25

(Mouthfeel) The texture is slick, lightly chewy and medium dry. The carbonation is up front mild but generates a subtle frothiness at the back for a soft but lively mouthfeel. The body is medium for the style, light/medium overall. Balance is very slightly bitter and acidic over sweet. Alcohol presence is very low, and there are no discernible off characters. 4

(Overall) I think that perhaps the only other beer that I have had that falls under the Vienna Lager banner is Samuel Adams Boston Lager, so there isn't much to compare to aside from the fairly well known American lager. I found Sierra Nevada's rendition slightly lighter-drinking in body, pleasantly tinnier and somewhat more bitter and flavorful on the earthy hop front. It has something uniquely autumn about it, not quite to the degree of an Oktoberfest-level of malt flavor, but its a good beer to appreciate alongside the inevitable oncoming of fall. It's certainly not a regrettable beer amongst its variety pack. 3.75

Appearance: Amber/copper color with a good head and lacing, lots of carbonation.

The Verdict: Very good. One of the better Vienna lagers I’ve had, in fact. Great balance to it.

-Bottle- Pours a clear, almost bright orange color with a creamy head. He head leaves curtains of lacing. Aroma is of crisp, sweet grain and light lager yeast. Toasty and sweet. First sip brings forth toasted flavors and caramel along with caramel sweetness. Soft bitterness. Lighter bodied. Smooth carbonation. A pleasantly simple brew? I would like to try this next to Boston lager. I enjoy is style of beer. It's always agreeable to me. If eel like Sam Adams has captured the entire market for this brew, so when I see someone else try it I am usually pretty eager to try it.