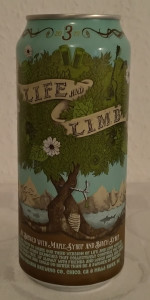 Eight years after it was last seen, a blast from Sierra Nevada Brewing Co.’s past is set to return.

That creation is Life and Limb 2019, a 10.2 percent ABV strong ale brewed with birch and maple syrup that is a collaboration between Sierra Nevada’s founder Ken Grossman and brewer Brian Grossman and Dogfish Head Brewery’s founder and president Sam Calagione and vice president Mariah Calagione. This will be the third time that the ale has been released after it debuted in 2009 and it was rereleased in 2011.

4/5  rDev -0.5%
look: 4 | smell: 4 | taste: 4 | feel: 4 | overall: 4
Deep cellar pick - vintage 2009. 22oz. bottle served in a Spiegelau tulip. Pours the color and clarity of cola with a tight, creamy one-inch, tan-colored head that slowly disperses into a tight band around the shoulders and a dollop across the center. Nose expresses hints of roast, cocoa and root beer. Taste consistent with nose with some dryness to the cocoa almost akin to bakers chocolate. Mouthfeel is light-medium in body with a mild carbonation just shy of still and a slight creaminess to the texture. Overall, this beer has held up quite well for the age. I'll need to seek out a recent vintage to note the differences. Everything has coalesced nicely with time.
Sep 24, 2021

4.18/5  rDev +4%
look: 4 | smell: 4 | taste: 4.25 | feel: 4.25 | overall: 4.25
16oz can. Dated '09/19/19'.
Deep brown colored body, with a garnet back lit edge. Tan, small bubble head sticks around. Leaves behind rings and spots of lacing.
Aroma of toffee, oak, maple, woody root, and maple. Also some dark fruit of cherry and fig.
Taste is toffee and molasses, dark fruit, maple, oak, and a sweeter malt. Starts to have the flavor of an artisan root soda in the after taste.
Creamy, thicker mouth feel. Produces a little tongue numbness after several sips. Good carbonation.
Very interesting taste profile for a beer. No bitterness, but certainly not overly sweet. Hides the higher ABV% well. Heavily influenced by the two syrups.

From the CAN: "Ale Brewed with Maple Syrup and Birch Syrup"; "We are proud to share our third version of Life and Limb with its thousands of other branches that collectively comprise the craft brewing family tree. Sip slowly with friends and loved ones and savor long because one could do better than be a swigger of birches."; "Life[:] This living brew is naturally carbonated to enhance complexity and refinement and to encourage aging."; "Limb[:] For the Birch and Maple trees, whose syrup give this unique ale its flavor and symbolize the collaboration between Sierra Nevada and Dogfish Head."

I Crack!ed open the vent & beCAN a slow, gentle C-Line Glug into the awaiting glass. I was pleasantly surprised by the formation of two-plus fingers of dense, foamy, rocky, deep-tan/light-brown head with excellent retention that slowly fell away to a skim. Color was Very Dark Brown to Black/Opaque (SRM = > 34, < 44), allowing cola highlights to be seen at the edges. Nose was VERY sweet and CANbined maple syrup with the equally familiar smell of birch beer!

The latter is actually pop (soda pop) & a PA Dutch country staple. You would be hard-pressed to find any true Lancaster or Berks County native that has not had Birch Beer in their lifetime. A-Treat was a major manufacturer, but Pennsylvania Dutch Birch Beer is now widely sold, if you are interested.

Mouthfeel was big, thick, full & creamy, like a dollop had been scooped into my mouth & onto my tongue. The taste bordered on my leading edge of tolerance for sweetness. The maple syrup sweetness was actually causing me to sweat in response until the sharpness of the birch syrup kicked in.

This would be a good place to point out that Birch Beer (pop) is NOT Root Beer (pop)! It CAN be an acquired taste with a pronounced sharpness that sweet root beer does not evince. Also, it is a deep, rich red color, further differentiating it.

The birch syrup was really making it for this beer. Without it, I think that this would be far too sweet for CANsumption, ever. I have a good feeling that this is really going to smooth over time with age. I would hope for a drop-off of the sweetness as the sharper birch becomes more assertive, something that was already happening, a year into its time in the CAN. It was also dangerously drinkable as I realized when I stood up to do something & it hit me like a runaway freight train! Whoa. Time for a transcription break.

Okay, I'm back. No wonder they disCANage being a "swigger of birches" - my head was beginning to swim! I beCAN to savor each subsequent sip from that point onward. This was a definite ass-kicker, or perhaps I am out of practice with several long months of hard, grueling work. Either way, I was fully into taking it easy. Warming, closing in on room temperature, it became much more strong in terms of its spicy, earthy, almost medicinal birch flavor.

Remember me saying that it was an acquired taste? It is NOT the sugariness of the maple, nor is it like root beer. I knew a LOT of locals that went off of alcohol, but took up Birch Beer in its place. Not sugary, not sweet & goes really well with hard pretzels. Mmm.

Finish was still making me sweat. The interaction between the maple & birch was reaching a level, at just one year in. I am setting a seCANd aside for MUCH later in the hopes that the birch becomes really assertive. In the meantime, YMMV.

4.18/5  rDev +4%
look: 4 | smell: 4 | taste: 4.25 | feel: 4.25 | overall: 4.25
Look: Jet black with a tan head that reduces to a thin layer leaving heavy lacing
Aroma: Maple, vegetal notes – almost chicory-like, molasses. No booze, no hops, slightly over-toasted bread
Taste: Oak, maple, brown sugar, almost melanoidin notes, figs, dates, caramel and again, zero alcohol heat that I can detect
Mouthfeel: Viscous but not heavy, lighter finish than expected and most welcome as it doesn’t coat the tongue or kill the palate – begs for another sip
Overall: Deep, heavy-hitter here – almost what I would call an “imperial brown ale” - and really good. Complex but not over-the-top and wouldn’t expect anything different or less from these two great breweries

Reviewed by rajendra82 from Georgia

3.98/5  rDev -1%
look: 4.5 | smell: 4 | taste: 4 | feel: 3.5 | overall: 4
The beer in the tulip glass looked dark ruby in color and formed a one finger thick head that dissipated quickly. The aroma was pretty heavy on chocolate and maple syrup. The taste was quite different than I expected. It was not too sweet at all. Instead there was a mix of sour cherry, roast grain, and black coffee in the taste which I did not detect clearly in the smell. The finish is where I could get a touch of vanilla and some birch syrup astringency. The aftertaste was somewhat spicy. The body of the beer was quite thin, compared to other ales of this strength. Alcohol content was very well hidden under the layers of complexity, and there was no boozy feel here. Very interesting mix of flavors, and very cool looking can.
May 12, 2020

Reviewed by DannyBoy15347 from Missouri

4.33/5  rDev +7.7%
look: 4.5 | smell: 4 | taste: 4.5 | feel: 4 | overall: 4.5
Poured from a can dated 5-9-19 into a pint glass. Pours a nice dark black color with a big light tan head. Aroma is great, I get the maple syrup, carmel, as well as an awesome roasted malt character. Taste reflects all of the aromas with the rich malt flavor really shining bright. Mouthfeel is also really fantastic. I know the alcohol is there, but this brew is so smooth you'd never suspect it. Really an awesome collaboration between Sierra Nevada & Dogfish Head!
Apr 30, 2020

Reviewed by HaoleBoy from California

4.44/5  rDev +10.4%
look: 4.5 | smell: 4.25 | taste: 4.5 | feel: 4.5 | overall: 4.5
Canned one year ago. If I had the discipline I'd put a can back for another 6 months and see how it changes.
Deliciously sweet and spicy (peppery). Thick, rich, almost chewy mouthfeel.
Beer is definitely a "sipper" and fortunately, it holds up well as it warms. As you drink it the complexities are drawn out ... caramel, some cherry fruitiness, as well as subtle the roasted malt flavors.
A really remarkable beer.

3.96/5  rDev -1.5%
look: 4.25 | smell: 3.75 | taste: 4 | feel: 4 | overall: 4
Handsome dark brown brew with an abundant light beige foam in the thistle glass. Rich and sudsy on the tongue. Sweet but also tangy. Plenty sweet but the sap flavors are more interesting than the blandness of lactose or other residual sugar. Roasted malt, nuts, and cocoa. Hot and even peppery with alcohol, but smooth and clean.

Dark caramel aftertaste but not much bitterness. For a massively strong brew this is highly sippable and thoroughly interesting. A great alternative to the endless RIS styles. I think this is what DFH had been needing: a faultless big brewer to make their recipes. From the 16 oz can, a big of of tall order for something this strong. Packaged on 05/08/19, stamped on bottom of can.

Reviewed by BB1313 from Ohio

3.92/5  rDev -2.5%
look: 4.25 | smell: 3.5 | taste: 4 | feel: 4.25 | overall: 4
2019 vintage. Canned on 5/9/19. 16oz can poured into a tulip. Pours a dark brown with auburn hues; creamy khaki head that sticks around leaving great thick retention and sticky frothy lacing. The aromas are malt forward. Some floral notes. Hints of maple, caramel and cocoa. The flavors are bolder than the nose indicates. The maple syrup really shines in the flavor department. Lots of caramel along with some chocolate and toffee. Brown sugar is there. It's sticky. It's definitely on the sweeter side, but it's not cloying. Strong malt backbone. Finishes with a subtle warmth, but it's not hot or boozy at all. Mouthfeel is full-bodied with moderate carbonation. It's fluffy, creamy, heavy, velvety and smooth.

This is a nice brew. The maple shines. Nice flavors. The craftsmanship is on point. There's about 8 months on this one and it has aged well. It's enjoyable and fun to drink. I like it.

4.08/5  rDev +1.5%
look: 4.25 | smell: 3.75 | taste: 4.25 | feel: 4.25 | overall: 4
Pours a deep, dark mahogany coloration with a large, creamy head. Smells of toasted, bready, caramel malt, brown sugar and sweet and spicy maple/birch syrup. Taste follows the nose, being dominated by toasted, bready, caramel malt and sweet maple/birch syrup, with the birch syrup standing out particularly, lending a slightly spicy quality to this, as well as notes of brown sugar and earthy/herbal accents, with just a hint of pine and dark fruit: fig. Finishes bittersweet, with a light bitterness and some sweet and spicy maple/birch syrup, toasted, caramel malt and brown sugar lingering in the aftertaste. Full mouthfeel with medium/rich body and medium carbonation.

This is quite a well-balanced Strong Ale that's not nearly as sweet as I had feared from the maple and birch syrup additions. In fact, the more dominant birch syrup adds quite a nice spicy quality to this, while the rather herbal/earhy and lightly piney hop notes help balance out the sweeter bready, caramel malt, brown sugar and lighter dark fruit presence, Perhaps a tad boozy, but really not too bad, making for a rather pleasant sipper that manages a good balance between sweet and bitter/herbal/spicy notes.

O: Good beer that I would gladly drink again.