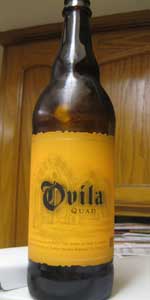 Sampled January 2012
A solid pour into my Lost Abbey Teku glass produces a 3-finger thick, nicely amber tinged, dark tan colored head. The beer is concentrated amber color that shows a brilliantly clear, deep, ruby-red hue when held up to the light. The aroma smells of pears, prunes, raisins and dark, sweet, fruity brandy up front and it gets a touch more spicy towards the finish with more warming alcohol notes, touches of pepper and some definite clove aromatics. The rich fruit character is really what defines and dominates the nose here though. The malt character certainly contributes to the fruit aromatics, but it also provides softer notes of toasted malt / bread, hints of chocolate perhaps, a definite dark caramelized character and even a raisin like note that seems clearly malt

The beer has only a soft’ish carbonation (but this is after smelling it for almost 10 minutes), but this nicely balances the rich, but not overwhelming body. The beer is not as sweet tasting as the fruit-focused aroma might have suggested; instead of being sticky with malt sweetness it really accentuates a deep fruitiness that reminds me of pears prunes, dried figs, raisins and perhaps even a touch of dates. The finish has a warm, spicy, alcohol laden kick to it that isn’t quite hot, but is definitely on the warming side of things. There is a sort of bitter / astringent character from the dark malt and/or dark sugar character here in the flavor & this mixes in with the higher alcohols, clove like phenols, and general spiciness from the fermentation character. There is a solid bread-like character here that contributes lots of caramelized grain notes, toasted brown bread character, brown sugar coated crust, an almost nut-like character, and just that rich, almost sweet-dessert like character one gets from deeply caramelized, perhaps molasses laden, dark breads. This beer reminds me of port, and even brandy (though not nearly so hot as that) in many ways with its ample fruitiness; it isn’t nearly as sweet as port is though, and I like that this has only a supporting sweetness to it such that it never seems overly heavy or cloying. The body is actually fairly light for a beer of this strength, it certainly has a viscous quality to it as it slides across the tongue, but it is more drinkable than is absolutely safe for a beer of this strength. When cold, and more carbonated more of the dark, concentrated sugar / dark-candi sugar like notes start to come out; it almost has a dark rum / more molasses character here and even almost has that sweet, buttery note that molasses and candi sugar can have to it.

The pear note seems to be the dominant fruit note in this beer, but the dark color and richness throws your senses off from recognizing this fact. The supporting dark bread, and touch of spice character really plays a key, supporting role in this beer. This is a solid Quad, one that I am quite happy to be drinking; it even seems to have a touch more complexity than young Westvleteren 12 does, but time will tell if this ages nearly so well.

It's a great quad, no doubt, but doesn't hold a candle to some of the benchmark guys like St. Bernardus or Rochefort. Pretty solid taste of dark fruit and some spice, but the flavors aren't as diverse or as layered as I would like it. A little hot on the back-end.

A - A dark mahogany colored brew with little clarity. One-finger head. No lacing left on my glass.

S - I got alcohol, cherry and a general tartness upfront. It was dry with a bit of mustiness that I think was coming from the yeast. I also got a slight almond and some faint cocoa.

T - I picked up that same alcoholic, cherry, tartness that I smelled. Star anise, clove and herbal/leafy like hop flavors followed. It finishes with subtle bitterness and lingering clove, cinnamon and alcohol. It tasted smooth and very soft.

M - Moderate crispness and a smooth feel. Around medium bodied.

O - Overall I thought the beer was well rounded, and very drinkable. It was a very simple beer to me, nothing really jumped out at me in the flavor, just a very mellow and balanced brew. For the price I probably wouldn't buy it again, but I'd drink it again for sure.

Pours dark brown and opaque with plum/mahogany edges and a two finger light beige head that slowly settles into a lasting ring. Streaks of soapy lacing left behind.

Medium bodied and fuller than expected with a nice balance of zesty spice, sweet and dark fruit and slightly roasted malt. Hints of pepper and clove followed by sweet vinous fruit especially grape, plum, raisin and dark cherry.  More prominent malt character than expected with some caramel, toffee and chocolate.  Subtle alcohol and rye spiciness in finish. Well balanced wih an excellently masked Abv making it deceptively drinkable.  Realy nice.  Wasn't into the dubble but this was very good.

Great looking beer, nice head, pours like a dream. Love the smell, sweet and rich. A bit of a hint of yeast. A very good taste a I drank it just a touch warmer that I would have liked but the flavor is still very much present of sweet malt. A bit more carbonated than I would have liked but it does help to open up the flavors and and does feel very good going down. Over all I would say really good beer. I would recommend as a desert type.

A - Pours a murky, rusty brown with a 2 finger tan head.

S - I'm not getting a lot besides caramel, candied sugars & dark fruits.

O - Not a stellar quad but one that is above the median of the group, IMO.