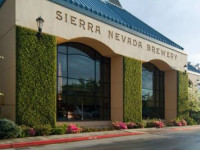 Vibe: It is a deathstar with a big ass restaurant, no way around that fact. It's worth seeing for scale but hardly charming in any way.

Quality: Here is of course where they shine... consistent and classic. These guys laid the roads down for all the new breweries to drive around on and even though you sometimes have to be cornered at a wedding bar to pick up a Pale Ale its always a nice reminder that quality is on every corner for a decent price.

Selection: There is usually at least one or two interesting taps to make you feel special. Plus a great opportunity to try all the other SN goodness fresh at the source. This is actually a huge plus considering a lot of this stuff does serious time at your local.

Food: Not great the 3 times I have had it. Standard pub quality but on the high end of the pub food price spectrum.

Overall: Its a must hit at least once in your life and if you happen to be in Chico it's worth adding in to your crawl even if you dont need to do the tour.

Great food, great beer, not really a ton more to say there. The brewery is great and offers awesome tours with drinks. They have a great tap room and gift shop as well. Dinner is more upscale restaurant style, good prices and good service.

A destination unto itself.

They built it, and they built it big. Like visiting a theme park for beer. Where to begin? The taproom is huge, roughly 15 beers on tap, with a well organized method for sampling 4 at a time. The pours a relatively small for samples sake, but quality over quantity. Tapas style bar menu with lots of interesting options. The hot pretzels are an obvious order. The pub chips looked great - but my server said due to the demand, they don't sell them as stand alone. Something I'd recommend they change.

The gift shop area is spacious to pick up any wearables, brews to go, or other merch. Try the mustards.

You can then take an elaborate self guided tour to see the production brewery. Very visitor friendly, open, and clean. Quite an experience.

Never been to the location in Chico, but for East coasters, this is a must-do pilgrimage.

This is a must go place for any lovers of craft beer! The selection of beers is World Class and the food is very good!

There is a great atmosphere in a very family oriented environment!