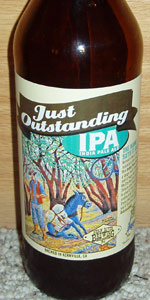 Notes: Named after a local mountain bike trail, this India Pale Ale has a large malt character and a huge hop profile. We Dry hop this beer with Simcoe and Amarillo hops to give it that great floral aroma and citrus finish. If you like India Pale Ale you’ll find this one Just Outstanding.
View: More Beers | Place Reviews
Recent ratings and reviews. | Log in to view more ratings + sorting options.

Getting back to basics, the American IPA has never celebrated bitterness better than in its West Coast varieties. Kern River's take on the sub-style is just bitter, just dry, just clean and just refreshing. All in all, it's just outstanding!

So Just Outstanding IPA gets going with a bubbly pour of hazy golden and orange hues. As its frothy white cap tops the rim, the common but clean and sharp fragrance of citrus, botanicals, spruce and peppery hops create a nearly citronella character on the nose. Simple and sweet in its malt profile, the beer's early taste is redolent with lighter versions of caramel, honey, toasted nuttiness and crust in a slight granola kind of way.

As the hops unfold on the middle palate, the simply blossom with citrus flavor. Branch-ripe tangerine coupled with ruby red grapefruit and the brightness of lime and a juicy impression of citrus evolve. A background of pineapple and lighter mango add a rounded fruitiness to the hops for a complex and flavorful balance. As the malt influences starts to dissolve off the tongue, the juiciness of citrus fades and its bitterness begins to take its place, providing strong impressions of pine sap, fruit peels, peppery grasses and herbs and an overall botanical gin-like counterpart once the alcohol flavors arrive.

Medium bodied and trending lighter, dry, crisp and highly refreshing, the relatively error-free IPA is a remarkably brewed IPA that's a standout in a crowded IPA market. Finishing snappy and lingering with bitterness, the session concludes with a comforting hop bite.

Very bold color, nose and flavors. Pours darker than most IPAs, with a tanned color. Head was white that disappeared into nice lacing. Nose is malty with piney. Taste bittery and lots of malt. Very nice change from the typical IPA.

A very good option for a traditional American IPA. Beautiful orange body with a great head and lacing. Smell is a bit light with a hint of maltiness in the middle and citrus at the back. Taste is good albeit uneven: it packs a juicy front but dissipates quickly. Feel is exactly where it should be--it's full in the front and middle--even as it fades a bick quickly. It is exactly what it should be.

Small glass from draught @ Zeezicht Breda. Pours a light hazy deep golden colour with a thick frothy off white head with some lacing. Aroma's of grassy hops, a little old, fruit. Retronasal it's fruity and old hops. Flavour is moderate sweet and moderate bitter. Medium bodied. Finishes with a short firm bitterness, dry. I will have to try this fresh at some point.

Canned
L: Copper, very light haze. 1 minute post pour.. light head, sticky lacing.
S: Floral, earthy and very light citrus in background.
T: Earthy, citrus and quite malty.
F: Medium, a bit carbonated.. low bitterness.
O: I've had this many times over the last year, and it does not disappoint. My only knock is the "cold" bite. As it warms, the malts take over and smooth the ride. I smuggled 6 of these back east recently.

Ho hum, another day another IPA.

Yet another thin, overly hopped beer with no subtlety. Nothing here worth getting excited about.

Smell is slightly medicinal with pine, resin and some grapefruit.

Taste is old school west coast, citrusy piney and bitter, with a twist of peach in the end.

This is an exemplary ale. I only have one of these left from my second six-pack this month, and I think I'm going to have to pick it up again if it's still on shelves locally.

L: Poured hard into a goblet, it produces ample bone-white head, which settles into a film of snowy billows with thick sheets of lacing to match. A faintly hazy and somewhat viscous honey-colored body reveals several fine streams of tiny bubbles throughout.

S: Fruity and enticing. Pine jumps out, as does lemon rind, followed by orange juice, and a hint of passion and piña, then mango takes over for a good second, coming finally into an an herbal finish with muddled mint and pine over yeasty pizza dough.

T: Would be incredible, except the hop profile leans too far on the herbal side for my taste. Drowns out all the lovely fruity character. I taste mostly grapefruit pith, passion fruit, mango, and pine. A touch of malty sweetness balances it out.

O: Just outstanding: not mind-blowing, but a head and shoulders above the median. A-

APPEARANCE: Somewhere between straw and orange, with a slight haze. The head is stack white foam and froth standing about two and a half fingers above the surface in a tulip glass. The lacing doesn’t cover a huge percentage of the glass, but it organizes itself into big, pillowy tufts that mark the rim of each previous sip.

SMELL: A nice blend of orange peel, floral notes, and grapefruit. The intensity of the aroma fades with the head, but fortunately a nice cap remains to keep it rolling.

TASTE: This is way more malty than I expected from the nose and from the aroma. Wow. Pretty heavy stuff. That said, there is more than enough hop flavor in here to pull through the malt. A lot of that orange peel comes through, but it’s now joined by a little more grapefruit, a lot more malt, and a noticeable minty flavor.

MOUTHFEEL: One of the bigger bodied IPAs I’ve had from that big malt base. However, it is not overly sweet and a pleasant hop bitterness (especially on the end of the sip) helps balance this beer out and at least leaves the perception of dryness. The carbonation is strong, which also helps quite a bit.

OVERALL: This is not what I expected at all. Again, much bigger malt, some unique flavor with the big mint pop in there, but overall pretty decent. I do not think this beer is past its prime (it was given to me less than a week ago from a friend in San Diego), but the lack of a date code doesn’t allow me to know for sure, which is frustrating.

22oz bottle poured into a snifter.

A: Amber/orange color with great clarity. Bone-white head retains well at a solid finger and paints the glass with lacing.

M: Medium bodied. Full and round with a firm malt texture. Ample carbonation scrubs briskly. Some astringency grips at the tooth enamel.

O: Bears some similarities to Sculpin on the nose, but in taste it goes much more dank, earthy, and bitter. A damn fine example of what west coast IPAs are all about. Brawny and bitter with a winning citrus and pine combo and a clean and crisp character.