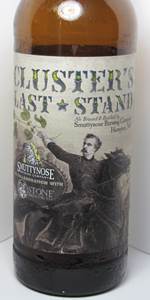 Notes: Old, new? It’s all the same, really. Cluster’s Last Stand defies the commonly  accepted notion that strong, hoppy beers are recent arrivals on the US beer landscape. Smuttynose has teamed up with Stone Brewing Company to recreate the original, post-Prohibition Ballantine IPA recipe. That’s right; strong, 60 IBU beer was brewed in the 30’s. How do we know? We read it in Stone Brewmaster Mitch Steele’s excellent and well-researched book, “IPA, Brewing Techniques, Recipes and the Evolution of India Pale Ale.” The only difference  between this beer and more contemporary IPAs are the hop varieties: Cluster, Brewers Gold, Bullion and East Kent Goldings. None of these are trendy and we were a little surprised to find out that all four were readily available. The result is a rich, copper-colored ale with a strong, refined hop profile of spiciness with a hint of grapefruit.
View: Beers | Place Reviews
Reviews: 59 | Ratings: 434 | Log in to view all ratings and sort
Reviews by GreesyFizeek:

On tap at the Old Toad in Rochester, NY.

Pours a hazy, nearly opaque orange, with a small, half inch head, and a little bit of lacing.

Smells quite piney and earthy, "dank" would be the word, with some bitter-smelling grapefruit.

This definitely somewhat mirrors the new Ballantine IPA, but is a bit more fruity, than the all-out bitter/oak assault that Ballantine was. I do get lots of pine, flowers, and grassy flavors here, earthy but tasty, with some bitter grapefruit, and juicy orange. There is a sturdy malt backbone here, bready and toasty, but not sweet at all, which is nice. This is quite a steely beer, which I like.

This is medium bodied, with a crisp mouthfeel, and a higher level of carbonation. It is really drinkable, I gulped it down quite quickly.

I think I like the Ballantine IPA better, but this is a really good effort anyway.

Reviewed live as an IPA, as Smuttynose's website identifies it as such (specifically as a post-prohibition Ballantine IPA recreation). Expectations are average; I like Smuttynose but Stone's involvement always makes me suspicious.

Served cold into a pilsner glass.

HEAD: 1 finger wide. Off-white/beige colour. Decent creaminess, frothiness, fullness, and consistency. Nice (~3-4 minute) retention. Leaves an uneven coating of lacing on the sides of the glass as it recedes.

BODY: Standard for an IPA: clean copper colour of average vibrance. Translucent and transparent. Clean, with no visible yeast particulate or hop sediment.

Appears well-carbonated. Very average looking for the style, with no stand-out characteristics. There's nothing egregiously wrong with it.

AROMA: Has more tropical leanings than I anticipated given this is a recreation of a Ballantine brew. Tangerine, melon, clementine, orange, orange zest. It really overdoes it on the caramalt, which concomitantly brings way too much sweetness into play. Thankfully, though, the hop profile seems robust enough to check that malty sweetness with enough bitterness. Pale malt is also present. Some floral character.

I find the fruitiness raw and bit rindy, with an undeveloped young feel to it. It's nicely zesty, though.

Aromatic intensity is below average, but it's not a reticent aroma.

To style, no overt booze, yeast character, or off-notes are detectable. Fortunately, it's not soapy or anything. Suggests a slightly imbalanced brew with some nice fruity tones.

TASTE: The abovementioned rindy raw hop bitterness dominates, to the beer's detriment, with plenty of tropical fruit and zesty character in there as well: tangerine, melon, orange, clementine, orange zest. Hopwise, it also has some floral notes and maybe a bit of overly bitter grapefruit. Lime emerges more and more as it warms. Heavy on the pithiness and bitterness.

It has too much caramalt, which lends the beer too much sweetness towards the end of its second act. Otherwise, the beer is imbalanced in the other direction (i.e. it's overly bitter on account of the overhopping). Pale malts fill out the body nicely but lend little in terms of flavour.

It's uneven structurally and imbalanced throughout, but I do find myself drawn to some of its flavours - particularly the clementine. It does veer briefly into that stale orange juice character you usually find in older IPAs, which I despise.

It's an unpleasantly aggressive brew, and suffers for it. If this is an authentic recreation of a Ballantine IPA, consider me shocked - I had no idea beer was this aggressive back then. But I suspect the overhopping is all Stone's doing, and that this isn't really authentic (regardless of what Mitch Steele has to say on the matter).

Average depth and duration of flavour, with an unexpectedly high flavour intensity. It's the opposite of mellow, and is hard to enjoy as a result. It's complicated for an IPA - which is to say it has plenty of complexity, there's just not much order or focus to it.

I can't say I care for it much, but it does have attributes I appreciate.

TEXTURE: Overcarbonated to the point where it's biting - an unpleasant characteristic especially alongside its overaggressive hop bitterness. That aggressive edge is manifested in the texture as much as it is in the taste, with an unwelcome coarseness emerging in the mouthfeel. Wet but unrefreshing. Medium-bodied but too weighty and thick on the palate. If it had more depth of flavour, its heaviness might be warranted.

Overall, this texture fails to elevate the beer or accentuate any of the constituent notes in the flavour profile (or at least any of the pleasant ones), but it suits the taste decently in a general sense. Some custom-tailoring is needed.

OVERALL: I'm not a big fan of the hop profile showcased here, nor do I think it's an authentic recreation of Ballantine's IPA (but take that with a grain of salt, as I never tried Ballantine's IPA). The whole Ballantine IPA recreation premise does fit Stone's ruthless marketing focus, though, and I don't think it a stretch that Stone - more a marketing company than a brewery - would take advantage of older drinkers' awareness of a historical recipe to ship product. (For the record, other recreations of Ballantine IPA put the ABV much lower than 8.3%). With that in mind, it's nowhere near as drinkable as it should be if it's truly 8.3% ABV. Far from a great brew in the style, and far from Smuttynose's best brew, but I'm not unhappy I tried it once. I've had worse and I've had better, but this is ultimately an average brew. I wouldn't recommend it to friends, and I won't be buying it again.

Pours a beautiful opaque golden orange. In a beer-clean IPA glass, the head maintains at least ten minutes without taking a sip. After taking my initial tasting notes and sipping some more, the head still maintains very well in the glass.

The body is light-medium. Flavors of orange peel and other citrus immediately engulf the palate and linger long after the finish. Wouldn't be able to tell by flavor by itself that this beer comes in at 8.3% ABV, but the body gives more of an indication.

Overall, it's a nice beer, but not something I would continually seek out. The packaging is really cool, but it gave me no indication whether this would be a strong ale or double IPA, and no indication of why they chose "Cluster's Last Stand" as the name. I'm sure it's on the website, but part of the allure of these beers is why they chose the name (even though I bought it anyway!)

Burnt orange, a bit murky, lots of carbonation in the body, but a rapidly decaying head that converts to an oil slick with in minutes.

Floral aroma, but weak and unimpressive.

An interesting curiosity. Been there, done that, moving on.

Thanks to Joe_Grizzly for this extra in a recent trade box that should really have exploded from the force of the hops contained within. 22 oz. doomed bottle split with my wife.

The pop brings foam fizzing right up to the edge of the bottle: these two breweries didn’t skimp on the carbonation bill. Fake tan orange. Smells orange too, and mango, sweet.

Cluster’s Last Stand is a pretty good name for a beer, but this brew falls to LCCD syndrome (least common collaboration denominator). Butter-sweet malts greet my palate. Sourdough pretzels, orange Tang, nasty earthiness which roars in mid-palate & drowns out everything else. I’ve let it warm up a bit to confirm, but doctor, the patient is dead.

Separately, these two breweries kick some serious IPA ass; together, I’m not sure their foot could reach my ankles. A collaboration gone seriously wrong. Drain pour.

Pours a copper color with a white soapy head that leaves sheets of lace. The aroma has pine, woods, tea and a faint lemon citrus. The taste reminds me of a modest barleywine or a rather large ipa. Pine, grapefruit pith, and tea meld with brown sugar, toffee and caramel. Full bodied, big assed brew. Overall, this tilts the tide towards modern Double IPA territory from a classic English barleywine. Kind of an Albatross but that's not a bad thing.

This beer is a collaboration brew based on the Ballantine's IPA recipe in Mitch Steele's IPA book. This tastes nothing like the typical West Coast IPA, but it is fantastic. The nose is catty, with lots of black currant and some lavender floral notes. Flavor is resin, with some fruity currant notes and a bit of floral hops. The malt is on the light side, but some bready Munich notes provide the right balance. Bitterness is sharp and sticky, but fades nicely on the finish leaving you wanting another sip.

Served on draft in a tulip at the Union Brewhouse in Weymouth.

Appearance: This beer poured a one finger head was poured that reduced to a thin layer. It is a copper color with great clarity and vision of bubbles coming up through the glass. Nice frothy awesome lacing down the glass as the beer was drank.

Taste: Balance, balance, balance. This beer tastes as food as it smells and is balanced on top of that. Love it. Need another sip.

Overall: Pretty awesome DIPA. Balanced and deceiving. What else would you want? I know I want more of this soon.

Pours a hazy orange with a foamy tan head that settles to a partial film on top of the beer. Foamy swaths of lace form around the glass on the drink down. Smell is of malt, citrus fruit, citrus zest, and slight herbal hop aromas. Taste is much the same with citrus fruit, citrus zest, and grapefruit juice flavors on the finish. There is a mild amount of hop bitterness on the palate with each sip. This beer has a lower level of carbonation with a slightly crisp mouthfeel. Overall, this is a good beer that is tasty and easy to drink without any real alcohol presence despite its higher ABV percentage for the style.