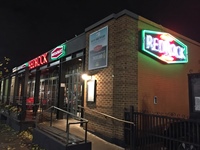 Reviewed by marc77 from California

3.75/5  rDev -2.3%
vibe: 4 | quality: 3 | service: 4.5 | selection: 3.5 | food: 4.5
The service, at least at the bar, seemed relatively knowledgeable about their beer. They were also very prompt and friendly. Food, although a bit pricey for a brewpub, was quite excellent-- the wood - fired oven was definitely a plus. The beers were all clean and flavorful considering the constraint placed on them by the 3.2 ABW draft limit. Busy but lively and unpretentious atmosphere. If you're ever in Salt Lake (for what reason I don't know... I was there for a conference) visit this place for sure, then walk to the other brewpubs in close proximity.
May 23, 2002
More User Ratings:

Sat at the bar. Bartender was nice but at times service as spotty. I almost left because no one even acknowledged my existence.

I had the imperial stout and the tripel. The stout was very good the triple just average. A decent selection of beer styles but of course we are in Utah so you can get anything over 5 % ABV on tap. Those beers are available in a bottle or can but no opportunity for a sample taste.

Place is clean open busy. The vibe is all restaurant. Maybe on less busy hours or might be more beer oriented. Many folks say at the bar and had wine or a cocktail.

3.93/5  rDev +2.3%
vibe: 4 | quality: 4 | service: 4 | selection: 3.75
Red Rock Brewing is located in Downtown Salt Lake City near the Convention Center. It's a large establishment with plenty of tables and a large bar area. Due to Utah's unique alcohol laws, they only served beers 4% or less on tap.

There was a nice vibe, lots of people. I had their house Gose which I enjoyed.

Reviewed by IPA17 from New Jersey

Reviewed by hawkssb04 from Utah

Rated by Wasatch from Colorado

Reviewed by timsoder from Utah

4.15/5  rDev +8.1%
vibe: 4.5 | quality: 4.5 | service: 4 | selection: 3.5 | food: 4.75
I've been a long time fan of Redrock. They are one of the most underrated brewers in Utah, IMHO. Excellent food; try the pizzas or the fish and chips, and a small but exceptional set of beers. The Elephino is a great double IPA and the Drioma a solid imperial stout. Their first foray into barrel aging, the Furlong, was outstanding. Overall, highly recommended.
Jul 22, 2016
Rated: 4.41 by IDABEERGUY from Idaho

Rated by IckyT2012 from Florida

It is a large L shaped space with lots of perimeter seating. The bar is also L shaped and is near the open kitchen with a wood fired pizza oven.

The decor reminds me a bit of what a corporate committee designing a brewpub would come up with. There is some exposed brick and ductwork, a concrete floor, granite bar and a swag station in front. It's not bad, but feels a bit sterile. It was crowded on a Tuesday evening, so they are doing something right.

The menu is large and I thought my choices were pretty tasty.

Service at the bar was a mixed bag. The two tenders seemed a bit overwhelmed and given the size and crowds, I thought they could use one more. One of the guys was nice and jovial, the other was a trifle surly and a bit stressed out. The guy next to me was livid at his poor service, my experience was slightly better. Note as the crowds thinned out, the service really ramped-up which tells me they do need a third bartender…

Beer selection is decent with 10 house drafts and 10 house bottles. The bottles are 500ml and priced fairly at $6.50 and drafts are also well priced at $4.75.

I would revisit, but have found other places in SLC that I like better

Standard cookie cutter brewpub thing going on. Good selection of brews. Red Rock bottles some nice stuff. Le Quatre is a really interesting saison. The food sucked. They only make burgers medium-well, and I was really in the mood for a burger. At first it was the health department that mandated it. Then it was something about lawsuits. Well, I gave it a shot and gave them the benefit of the doubt. It was nasty. Totally dried out and cooked to oblivion. Not worth $0.03, let alone what I paid for it. The worst meal I had in quite some time. I didn't want to get into a returning it scenario since the initial conversation about it was basically b.s. Service was also mediocre overall. The bartender was in the corner on his phone (at the same time my burger was sitting out waiting to be picked up, I think). After several other less than professional interactions with the staff on two other occasions besides this, I can say without hesitation that this place is more committed to milking the cow than providing an interesting experience. Nice bottled beer. Lame brewpub experience.

3.7/5  rDev -3.6%
vibe: 3.5 | quality: 4 | service: 3.5 | selection: 3.5 | food: 4
my first brewery in utah. a very standard applebee's type setup inside a fairly large facility. tanks visible in the back, bar in the middle, wood fired pizza oven working hard as well, comfortable but unexciting space. nine or ten beers on tap, six of which were light pilseners, golden ales, or lagers, definitely seems like a more mass appeal and session beer type of place, all drafts at 4% abv per law, but the two bottles i had from here were both extraordinary, way more ambitious too, so they appear capable of anything. the elephino double ipa, and the reve belgian ale were highlights. beers were fairly priced and the wood oven pizza i ate was really nice, as was our cajun shrimp appetizer. service was decent, if a bit slow and impersonal, but fine overall for a pretty busy and good sized place. overall a cool place to go for a few pints and a bite to eat, but stick to drinking their bottles selections, which i found a lot more unique and interesting than i did most of the beers on their tap list.
Apr 18, 2012

Reviewed by youbrewidrink from Vermont

The service was prompt and friendly right from the start, we were there during a shift changes and the servers did not miss a beat.

The beers were true to style and there was at least 8 beers to choose from. Nothing outstanding, nothing bad.

The food was great, we started with the bar crackers and all had specials for dinner.

All in all this is definitely worth a visit if your in SLC, a big plus that it is within walking distance of the Gateway Mall.

Reviewed by busternuggz from California

4.18/5  rDev +8.9%
vibe: 4 | quality: 4 | service: 4.5 | selection: 4 | food: 4.5
Red Rock was a kinda classy pub place, laid back but nice. The menu has fancy foods and pub fare.
The beers were pretty decent, I particularly enjoyed their pilsner and wet hop harvest ale. The stout and porter were light and passable, but they have those ABV laws for taps in Utah, so what can you do.
The service was quick and friendly. Got a cool beer nerd bartender who was happy to give me samples of everything before I tried it and talked beer with me for a while. My food came out pretty quickly.
They have a range of tap beers and some big bottle stuff (higher alcohol ones). Their Elephant DIPA was pretty good.
The food was delicious, I got the warm shrimp salad with pistachios, grapefruit, potatoes, and blue cheese. It was pretty awesome. The prices are a little high but seem to be comparable to other places in downtown Salt Lake City. Their pints were like $4.85 I think, cheaper than Squatters Pub (and less crowded).
I enjoyed this place, glad I found it on accident around the corner from Squatters Pub.