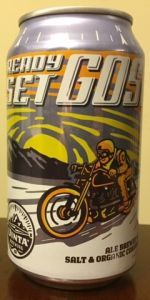 This was drinkable, but it's a below-average take on the gose style.

A- The label looks nice, it's got a nice design that goes with the name. It poured a hazy golden color that took on more of pale golden color when held to the light and it had almost three fingers worth of cream white head that died down to a thin ring that eventually faded away and it left a little bit of patchy lacing behind. This is a pretty nice looking beer, I have no complaints.

S- The aroma starts off with a medium amount of sweetness with the coriander being the first to show up and it impart a typical coriander like aroma that's followed by a fruit aroma that's a mix of citrus and stone fruit like aroma. Up next comes a noticeable soapy aroma that leads into the malts which impart some light grainy, bready, and doughy malt aromas. This beer has a nice aroma, but I could go without the soapy aspect.

T- The taste seems to be similar to the aroma, but not soapy and it starts off with a medium amount of sweetness with the coriander still being the first to show up and it shows up just a little less than it did in the aroma. Up next comes that same fruity aspect that takes on more of a lemon aspect this time and it goes into a slightly lighter amount of medium sourness. Towards the end comes the malts which impart all the same aspects that they did in the aroma and this time they show up a little more. On the finish the sourness doesn't linger too much and there's a little saltiness with a lemon, light coriander and malty aftertaste. This is a nice tasting beer, but I wish the flavors were a little bolder like they are normally for this style.

M- Fairly smooth, a little refreshing, not to crisp, medium bodied with a lower amount of carbonation. The mouthfeel is decent, but it could use more carbonation.

Overall I thought this was a decent beer and it was pretty close to an average example of the style, it wasn't bad, but it didn't really stick out for the style and the all aspects seemed to be a little lighter than are normally for the style. This beer had ok drinkability, one can is enough for me, I don't really have the urge to come back for more. What I like the most about this beer is the appearance, it's a nice looking beer. What I like the least about this beer was the soapy aromas and the lighter carbonation, those two aspects could use some work. I don't think I would buy this beer again and I can't say I would highly recommend it since it's not too hard to find a better example of the style. All in all I didn't mind this beer, but I didn't love it and it seemed like it was a little rough around the edges and it could use a little cleaning up. It's now one of my least favorite beer from this brewery and it's pretty close to being an average Gose. Better luck next time guys, this one still could use some more work.

Reviewed by Strike00 from Iowa

3.5/5  rDev -1.1%
look: 3.5 | smell: 3.5 | taste: 3.5 | feel: 3.5 | overall: 3.5
This was poured into a stange. The appearance was a ruddy burnt yellow color with a decent transparency about it. Fast rising carbonation hits a quickly dissipating white foamy / bubbly head. No lacing. The smell had sticky sour wheat blazing over some lemon rind bitterness. Coriander is barely there. But I’m not worried as I think Uinta just wanted it in there as an extra. The flavor takes on the same as the aroma follows mostly through on into the aftertaste with a bit more salt showing up there. Semi-dry finish. On the palate, this one sat about a light on the body with a fairly decent sessionability about it. Carbonation hits nice and low on my tongue allowing sour to bitterness gripping my tongue appropriately. Overall, it’s a good gose that I could come back to.
Jun 28, 2017
Rated: 2.51 by HurryItsJacob from Massachusetts

S - Wine barrel notes, a bit of acidity, lemon, and a mild whiff of burnt plastic.

T - The front has wood and lime, white wine, a bit of minerality, phasing into a stronger acidity, and a close that is hints bitterness.

M - Brisk open, but the close is a bit cloying, lingering on the tongue, a bit sticky.

O - This is a decent experience. The feel is a bit off, but the flavors are nice. There are better Gose out there, but this is satisfying nevertheless.

T: crisp and lemony tart. The salt, coriander and the tartness are moderate to low. The malt and hops are low. It has a pleasant lingering salty aftertaste.

F: medium light body and medium to medium high carbonation with a bit of prickle.

O: This is not a challenging Gose but it is a refreshing and very drinkable one.

The smell is of salinity and bready biscuits. Maybe like saltine crackers with a faint hint of coriander.

The taste has a very large salt presence, not overpowering but large indeed. A bit tart and tangy but not a lot of sour.

Mouth is running to the lighter side but has presence at the finish. And the finish itself lends towards more of a dry and salty finish.

This is a very nice Gose that has more of a salty taste and less of a puckering sour we have found in other Gose's. I find it to be well done as it seems to balance very well with each finely balnced sip of refreshing Gose beer.