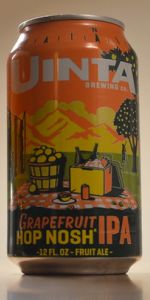 The aromas are grapefruit forward but not one-note. Some mandarin orange and mango are lurking there as well.

Honeyed crackery malts meld with the grapefruit on the tip of the tongue before the undercurrents of orange and tropical fruit detected on the nose arrive in midstream. Lemongrass, white pepper, and citrus zest/pitch take over at the finish, delivering a pretty stout bitter wallop without resorting to mundane resin. Just a little booze as the brew warms.

The brew is almost creamy, with restrained carbonation, and yet manages to provide a drying finish. Pretty drinkable for the malt and ABV level. Too heavy to be a true warm-weather brew, it was still pretty refreshing sitting on my deck this summer evening after a long day on the lake.

Uinta has been a little hit or miss for me, but this is a solid and remarkably refreshing near-DIPA.

A: Clear, warm gold with minimal head and good lacing.

4.13/5  rDev +3.8%
look: 4 | smell: 4 | taste: 4.25 | feel: 4.25 | overall: 4
Look - super hazy and a nice frothy head - retention is not the best - nice tan/orange appearance
Smell - not as aromatic as expected - some grapefruit for sure - smells tart - slight vinegar - slight caramel
Taste - super powerful hops jump in and fight with the grapefruit for center stage - starts sweet but when the grapefruit overtakes the hops, it gets a bit bitter - nice woodsy flavor - slight campfire aftertaste - very citrusy and enjoyable
Feel - decent medium bodied feel but maybe closer to the full bodied side - nice and thick and oily - some more carbonation sticking around would be a good thing though
Overall - another solid IPA from Uinta - could be a regular drinker - fruity and enjoyable - great on a hot day

T: Follows the nose, both sweet & sour grapefruit up front. A little dryness, grapefruit & touch of leafy hop as this warms. Finishes dry with plenty of grapefruit

Easy drinker, lives up to the name

Reviewed by Egizi from Vermont

Reviewed by Lingenbrau from Oregon

Aroma: Huge aromas of grapefruit, juicyfruit, bubblegum, and peach. Then some tropical melon and berry underneath. Very fruity. (4.00)

Flavor: Huge grapefruit flavor. Tons of grapefruit and pulpy orange juice flavor. Then more juicyfruit, bubblegum, and peach. Ends with a touch of tropical and pithy bitterness. No malts. Finishes clean and dry. (4.00)

Feel: Lighter-bodied. Great carbonation. Not too bitter, nor too sweet. Finishes balanced and clean. A touch of pithy astringency left on the tongue. (4.25)

Overall: Really one of the best grapefruit IPAs I've had. Well-balanced, complex, and has unique bubblegum flavors. Mot my favorite style for an IPA. Not a huge fruit fan, but this is one of them that I could come back to. (Final Rating: 4.03)

Reviewed by robotnewyork from Michigan

Smell: Ruby red grapefruit and lemon tones, buttressed by a sweet malt base of graham cracker

Taste: Graham cracker malt underpins, with ruby red grapefruit and lemon flavors emerging; somewhat pithy, in the middle with the finish being both bitter and sweet

Overall: A bit too malty for my palate

4.05/5  rDev +1.8%
look: 4.25 | smell: 4.25 | taste: 4 | feel: 3.75 | overall: 4
Poured from can into a pint glass
Appearance – The beer pours a beautiful hazed orange amber color with a huge billowy white head. The head fades very slowly over time to leave a ton of foamy lace on the sides of the glass.
Smell – The aroma is huge of a sweet grapefruit citrus smell that also has a light sweeter tropical fruit aroma. Very juicy and delicious smelling.
Taste – The taste begins with a good hit of grapefruit. It is a mix of slightly sweeter grapefruit juice and bitter grapefruit hop. Along with these flavors comes some tastes of tropical fruits and a little bit of pine. As the taste advances the tropical fruits get stronger and stronger with a tangerine taste really blowing up. The grapefruit also transitions a bit as it takes on some more grapefruit rind like bitterness. With a little more grapefruit juice coming to the tongue with along with a bit more pine as well, one is left with a nice bitter-sweet grapefruit taste to linger on the tongue.
Mouthfeel – The body of the beer is thick and chewy with a carbonation level that is on the average side. The feel is great for the mix of sweet and bitter grapefruit along with the tropical fruits.
Overall – A quite tasty grapefruit hopped up beer with a nice balance, between bitter and sweet.

From the CAN: "Beer Brewed with Renewable power - wind & solar"; "Pack it in - Pack it out"; "Stalk us?"; "Juiced by Uinta Brewing Co Salt Lake City Utah USA"; "Undeniably craft[,] unthinkably drinkable"; "Goes well with Anywhere."; "Forget the map, pack the Uinta".

This was one of those beers that could have multiple designations. The CAN even reads: "Fruit Ale" & so it CAN be thought of as simply another AIPA OR as a Fruit & Field Beer, which to my way of thinking is more apropos. Think of it like this - Hop Nosh is definitely an AIPA, but when fruit is used as an adjunct to the point of top billing, is it still simply an AIPA?

I was anxious to Crack! open the vent on this one after a rough day of teaching & instruction, lemme tell you! It was nice & loud & it was all that I could do NOT to perform an inverted Glug into the awaiting glass. Instead, I went with the usual slow, gentle, C-Line glug inspired by Auggie Busch. Man, it was excited to exit its extruded metal shell & greet me! It quickly formed just under two fingers of dense, foamy, rocky, tawny head with marvelous retention which, upon falling away, left glorious lacing in its wake! Color was Golden-Amber (SRM = > 5, < 7) with NE-quality clarity & now I had The Gelt Gang of Croesus, Midas & Mammon fighting with me for a taste. Nose smelled like my morning grapefruit juice! 8=O Mmm. Mouthfeel was an unimpressive medium, but if that is the worst thing that I say about this beer, then that would be saying something! The taste was extremely grapefruit, very bitter & very satisfying (if you like that sort of thing). The taste of this one left me weepy in thinking about the Tropical AIPA trend since this flavor profile is exactly what my hophead self craves & prefers. Finish was dry, bitter, grapefruit & just my thing.

Rated by HopsAreDaMan from Missouri

Reviewed by Spikester from Oregon

Reviewed by Ronl12 from Massachusetts

3.7/5  rDev -7%
look: 3.5 | smell: 3.5 | taste: 3.75 | feel: 4 | overall: 3.75
12oz can into Nonic Pint
BB 11/13/18
Iight brown with thin white head
Straight grapefruit juice
Caramel, and then grapefruit juice,  with grapefruit pith on the finish
Medium-bodied, average carbonation, easy drinking
Overall thisis solid but not great, as the added grapefruit is too dominant for my liking

Reviewed by craigbelly from Iowa