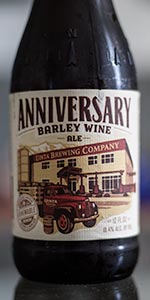 Notes: Rich and complex, this all malt barley wine exhibits hints of dried fruits, toffee and caramel balanced by an abundance of American hops.

Appearance is slightly foggy acorn reddish-brown with a tall khaki head that retains well and thick as a bubbly blanket.

A soft froth delivers caramels and light chars with subtle accents of citrus and pine that are mildly bitter and biting before the semi-dry, chewy finish.

A lot less aggressive than the Epic barleywine we had earlier today, there's even a touch of toastiness in the "char," the origin of which I'm not sure.

Reviewed by DanO1066 from Maryland

I Pop!ped the cap & was suddenly struck by a bout of sneezing! Was it the beer? I could not wait to find out, so I began a slow, gentle pour into the awaiting glass. It puffed up to form just over a finger of foamy, rocky, deep-tan/light-brown head with moderate retention, leaving a modicum of lacing behind. Color was Coppery-Brown (SRM = > 17, < 22) with NE-quality clarity. Nose was beautiful - leather, dried dark fruits, caramel, toffee, milk chocolate, weak coffee & a barrel-aged oaky, bourbon-like quality, although I do not believe that this ever touched wood. Hmm. Mouthfeel was full, like a scoop or dollop had been ladled onto my tongue. The taste was less pronounced than the nose, but it had clearly mellowed over the ~ two years in the bottle. The heat was prickly, but not fiery. The caramel & toffee flavors worked really well with the leatheriness while the coffee & chocolate flavors brought up the rear. My bottle was slightly aged, but IMHO, this could have gone a couple/few more years without any complaint from me. Finish was super dry! The yeast had been hard at work on this malty beast, I assure you. This was super smooth & was super smoothing me out. The best part was extreme finish with its kirschwasser-like cherry flavor, along with hints of raisins & prunes as well as brown bread, almost like a liquefied fruitcake. Phew! I have an even older bottle in abeyance …

Rich, sappy caramel color with hints of brown. Nice 2 finger head of yellow-white, recedes to 1/2 finger in a minute.

The aroma of this Barleywine has a perfect balance between sweetness and hops. It's pretty phenomenal. Caramel-toffee meets stiff, woody hops. It's not weighted in either direction, it's simply...perfect. How? What a feat.

Flavor tips more in the hops category, with a firm Nugget bitterness and tons of cone hops. Lots of residual oils as well. This packs a punch. Spearmint. Leather. Some residual caramel sweetness keeps things sticky, while the hops continue to pummel the palate and twist the tongue towards a bitter caramel crunch. Lots of oils on the finish.

Feel is medium-plus bodied, with a sappy quality and a dry, resiny, piney finish.

Overall, this is a palate buster. I respect the hell out of this beer but I simply cannot finish it. It's so in your face, it's like a football game in your mouth. Jock included. It's a Quad IPA with tons of rich caramel flavors. It's like Brown Shugga on steroids. Better than Brown Shugga. I get what they were going for here, and it's spot on. I don't like hoppy Barleywines, but this is incredible for what it is. Definitely pick this up if you like a lot of hops in your Barleywine.

Reviewed by bongobob from Utah

Uinta has recently switched to a best-before date which appears to be a year from release which confuses me. They should switch the wording to not-best-before.... Unless they've changed the recipe, I'm not sure why they simply don't put the bottled on date.

Overall one of my favourite Barleywines.

Rated by Brendolikesbeer from Utah

Very good hop to malt balance on this one. Mostly sweet, but then there's that sharp hop bite. Alcohol seems more of a suggestion than anything else.

Getting close to full on the mouth, sweet wash and bitter finish.

Reviewed by LAp from Ohio

3.92/5  rDev +2.1%
look: 4.25 | smell: 3.5 | taste: 4 | feel: 4.25 | overall: 4
Pours a copper-brown with a faint ring of tan head. Relatively nondescript, almost cola-like nose. The palate delves a little more into the caramel notes of a barleywine, but the dark fruit is missing, and the toffee is highly subdued, leaving only a slightly accented cola-like flavor profile. Mouthfeel is appropriately medium/medium-thick. It's not a bad beer, and certainly more broadly appealing perhaps than most barleywine, but it seems to miss most of the truly special elements of the style.
Mar 04, 2017

Reviewed by jmasher85 from Maryland

3.31/5  rDev -13.8%
look: 4 | smell: 3.5 | taste: 3 | feel: 3.75 | overall: 3.25
Well it sure smells like a barleywine, and it looks like a barleywine, but it doesn't much taste like a barleywine – more just a grainy, English strong ale. Smell has hints of fermented, dark fruit and that sour mash smell you get during brewery tours, plus a hint of tobacco and ash. Taste is malty, bready, with a bitter, blandly hoppy, sharp finish that lingers a bit too long. I know why this bottle cost under $3. Not bad, just terribly mediocre, which is a shame because normally this brewery is solid.
Feb 01, 2017
Rated: 3.1 by Darhawk from Utah

3.86/5  rDev +0.5%
look: 3.75 | smell: 4 | taste: 4 | feel: 3.25 | overall: 3.75
From a bottle, pours as a hazy deep amber or light copper with a creamy tan head that didn't have much staying power. Aromas of malt and indistinct citrus. Flavor is all bitter hops and sweet malts. But there are also caramel, toffee, and (of all things grapefruit). Carbonation is decent but it's more boozy versus well rounded satisfaction.
Dec 11, 2016
Rated: 4 by ajdemma from New York

Appearance – The beer pours a hazy copper color with a small fizzy white head. The head fades rather fast leaving just a tract of foamy lace on the sides of the glass.

Smell- The aroma is quite sweet and bready with the sweet being of a brown sugar and molasses smell. Along with these aromas comes some other smells of a grape and slightly herbal and grassy smell.

Taste – The taste begins with quite boozy taste mixed with tons of breadiness and sweet caramel and darker fruit flavors. As the taste advances even more sweetness comes to the tongue along with some lighter dank hop tastes and a rather strong grainy/grassy taste. Toward the end the booze ramps it up even more leaving one with a very sweet and bready hot taste to linger on the tongue.

Mouthfeel- The body of the brew is very thick and chewy with a carbonation level that is quite low. For the rich and thick, heavy sweet, and boozy tastes the feel is rather nice and helps keep it a slow sipper.

Overall- Ah… A bit too boozy and sweet for my liking of a barley. Not bad, but not great either in my opinion.

Reviewed by Marraybay from District of Columbia

Taste: Nice up front sweetness before the citrus explodes; Very smooth for such a big beer.

Overall: This is a really good beer, particularly for anyone who enjoys barleywine or DIPAs.
Uinta does a remarkable job of keeping the train on the tracks here, given that some barleywines
can be a bit unruly with respect to their overall balance and kick. This one could be part of my
regular rotation for the foreseeable future.

4.22/5  rDev +9.9%
look: 4.5 | smell: 4.25 | taste: 4 | feel: 4.25 | overall: 4.5
From the cellar
12oz bottle into Libbey Tulip
Bottled 1/7/13 (3 yrs 9 months old)
L- dark brown almost black, with tints of red, thick tan head that is here to stay, leaving gorgeous rings of lacing
S- sweet enticing malt, sweet dark fruits such as dates & figs, caramel and incredibly some hop bitterness as well
T- rich chocolate malt, the dark fruit on the linger, with a spicy finish that has the a slight (expected) oxidation
F- rich and full bodied, heavy carbonation, drinking exceptionally smooth without a trace of the 10.4% alcohol
O- this beer has aged incredibly well, as mentioned in the feel drinking real smooth, only slight trace of oxidation, will definitely make an effort to seek this one out again

Taste is just drenched in caramel and C hops. Some of the dark fruit bitterness creeps into the mouthfeel. Toffee too. Retains a rather drinkable form for a barleywine. I have probably 5-6 years of these stashed in the cellar, will revisit as I drink some of the older ones.

Pours a deep ruby color with a moderately large head that fades quickly to a small ring and a small amount of active carbonation. Smell is musty, woody, dark fruits like maybe plums and dates.

Taste is definitely a barleywine. Rich, hearty sweetness. A little booze. Some of the dark fruit from the nose, tastes fairly oaky.

Mouthfeel is thick but not clinging. Overall, very nice beer.

Reviewed by Contra from New York

4.24/5  rDev +10.4%
look: 3.75 | smell: 4 | taste: 4.5 | feel: 4 | overall: 4.25
Barley wine is one of my favorite styles due to its complexity, and Uinta got it right. While I tend to prefer a barley wine that's more on the sweet side than on the bitter-hoppy side, this beer is very well balanced between the two (I enjoy hoppy-bitter beers, but sweeter is my preference for a barley wine). There's a nice silky viscosity to it, which I love in thicker beers. The notes in the commercial description are accurate; dried apricot/fruit, toffee & caramel, but balanced with a nice bitterness. The worst part of this beer is that I'm drinking it too fast for it to properly warm up, which is a great compliment to how good this beer is!
May 31, 2016
Rated: 4 by petewheeler from Maryland