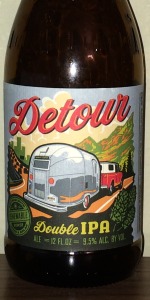 Notes: Detour blazes the trail for fresh and bold Double IPAs. Four varieties of hops combine to step up the flavor profile. A hoppy adventure that finishes dry. Big in alcohol and character.

3.88/5  rDev +1.8%
look: 3.75 | smell: 3.75 | taste: 4 | feel: 4 | overall: 3.75
Idk for a cheap double I actually really like this one fresh. I'm mostly impressed in I was scared to try and then ended up liking it. It's by no means a great double but the abv and taste makes this pretty good when comparing it to the other cheaper options. I'm not gonna compare this to Outer Range or Weldwerks or something but this is about as good as say double digit or maharaja by Avery or myrcenery by O'Dell or one of the cheaper options for the style. I have no complaints it is what it is and probably the best thing I've had from Uinta.

I don't like this in a glass this was more flavorful right out of the can to me in this instance.

Reviewed by TheBrewsClues from California

3.27/5  rDev -14.2%
look: 4 | smell: 3.25 | taste: 3.25 | feel: 3 | overall: 3.25
Look: I liked the color. A bright reddish-orange
Smell/Taste: A little too dank for my taste. It seemed like they tried to hard to give it flavors and rather than complex, it seemed a bit too much. The citrus flavors took a backseat to a lot of grassy, staleness.
Feel: A bit over-carbonated for my liking, had almost like a sparkling cider feel. Definitely would not call this smooth
Overall: Wasn't terribly impressed. Not going to have this one again.

3.92/5  rDev +2.9%
look: 4 | smell: 3.75 | taste: 4 | feel: 3.75 | overall: 4
Pours a dark orange with a white head which dissipates to good lacing. Strong notes of hops, tropical fruit, and a floral aroma. Taste is distinctly hoppy with the bitterness of hops resin, pine, grapefruit and malt with a fairly well balanced sweetness of caramel, honey and tropical fruit. A solid DIPA but not life changing. Quite boozy at 9.5 ABV and certainly feel the bite.
Mar 04, 2021
Rated: 3.75 by mpenske from California

I don't love the hop profile, and it's a bit too warm alcohol-wise as well as too full-bodied and heavy on the palate. Caramel malts are emphasized more than the hops and their concomitant bitterness, leading to a beer that while not egregiously imbalanced fails to showcase hop varietals instead of malts - at least to the extent that an Imperial IPA needs to.

Drinkable but far from great...I hoped for better from Uinta but its pricing isn't awful. I can't imagine ever wanting to pick this up over a widely distributed, cheaper, and better expression of the style like Lagunitas Sucks, let alone superior regional and seasonal stabs at the style.

I guess I'm glad this is available in a market like Utah's where higher alcohol craft beers are less ubiquitous, but it won't impress those familiar with the modern imperial IPA. I don't see any potential here and don't think the recipe can be tweaked to save it.

The texture is thick and coating. A big, abrasive bite and aftertaste reveal a basic simplicity: There are some caramel notes but this is basically a hop bomb. A bit boring, but fine for those who seek the hop.

Reviewed by drjamyma from Massachusetts

Reviewed by BaniJet from Indiana

A rough pour yielded a HUGE eggshell head; a curtain of frothy lace.

3.81/5  rDev 0%
look: 3.75 | smell: 4 | taste: 3.75 | feel: 3.75 | overall: 3.75
Poured from can into a pint glass
Appearance – The beer pours a golden amber color with a one finger head of white foam. The head fades fairly fast to leave some trace lace on the sides of the glass.
Smell – The aroma is strong of a grapefruit citrus hop mixed with a good showing of pine. Along with these smells comes some notes of a grassy and a slightly caramel and tropical aroma.
Taste – The taste begins with bready and caramel malt flavor that has a little bit of sweeter fruit mixed within. Right from the start the pine and citrus hop are evident, with both getting slightly stronger as the taste moves forward. The citrus outweighs the pine, but overall there is a nice balance between the two. A bit more sweetness of an orange and light brown sugar come to the tongue at the end, and with a hint of an herbal hop working its way to the tongue, one is left with a nicely hopped, semi-malty, but still easy drinking taste to linger on the tongue.
Mouthfeel – The body of the brew was slightly thicker to moderate in chewiness and thickness with a carbonation level that was a little on the lower side. Overall fairly nice for the hop, malt, and abv of the brew as it helped keep it a flavorful slow sipper.
Overall – A rather fun double overall. For the style it is rather balanced in malt and hop and makes for a nice brew to just sit back, relax, and sip.

Reviewed by nicholas2121 from Ohio

4.02/5  rDev +5.5%
look: 4.25 | smell: 4 | taste: 4 | feel: 4 | overall: 4
Detour Double India Pale Ale brewed by Uinta Brewing Company, with an ABV of 9.50% This American Imperial IPA pours out of a 12oz can into a pint beer glass a deep golden amber color with a nice white head. Really digging the deep golden color almost a slight copper look to it. There is also a nice amount of lacing to this brew, it sticks to the side of the glass well. The smell is rich with lots of strong IPA notes, not saying that is a bad thing. You first pick up on the hop bitterness. Then it mixed with lots of earthy grains and malts. So far this is a nice inviting brew. Now for the taste, it is Bold with hop bitterness , but a slight sweetness in the taste as well . Then there is a nice amount of earthy grains and malts tgat mixes well with the hop bitterness. The body of Detour Double India Pale Ale is a medium to heavy, but not to heavy. It is hard to pick up on the 9.50% AN ABV in the IPA, it just goes down that smooth. The mouth feel is Hoppy,Bold, Clean, Smooth and Refreshing. Overall I'm going to give Detour Double India Pale Ale a soild 4 out of 5. I would definitely look this brew up again giving the opportunity to. Uinta Brewing Company, did a real nice job with this American IPA.
Nov 16, 2018
Rated: 3.65 by Tiernan from Texas

Reviewed by iguanodon from Utah