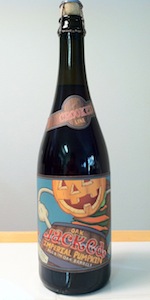 The detailed oriented, artistically sculpted or masterfully blended care with pumpkins doesn't end with their Jack O' Lantern carvings, but actually extends into the world of flavor as well. And few do better than Uinta's imperial, oak aged, pumpkin ale.

Dark bronze and with tawny highlights, the deep amber beer looks like brandy after its bubbles subside. A deep thrust of the nose into the snifter delivers robust caramelized sweetness that stems from toffee and maple to sorghum and molasses. With the "pie" spices fluttering above, the rounded early palate and aroma is suggestive of graham cracker crust, praline and peanut brittle.

And as the decadent taste reveals its layers in the middle portion, bold spices rise to greet the sweetness in form of cinnamon, nutmeg, clove and peppercorn. Slow dissolving sweetness leads to a high dessert taste as the linger of sweetness continues to support the spice.

The beautiful taste that suggests pumpkin pie taste in beer form finishes differently- it dries to a mid-sweet term with spicy heat and spice from dry oak, spice additions and elevated alcohol heat. What transpires afterward is a taste of rum cake, chestnut and port wine. As palate fatigue would normally accompany such taste, I'm wishing for more of this pumpkin ale and blue cheese pairing.

This beer pours a murky deep rust with a small head. The aroma offers up lots of nutmeg, candied orange peel, brown sugar, clove, pecan - essentially all the classic winter spices. The flavor is quite sweet, with nutmeg, clove, almond paste, vanilla, orange peel, and roast apple. The mouthfeel is full and sticky, almost syrupy with pillowy carbonation. Overall this fits well with in this style - a big, sweet, spice driven beer - and while it may be gauche among a certain set, I am actually growing fonder of these. The barrel aging makes this a more complex, with big vanilla notes woven right through the spice.

A: Reddish brown with a foamy mocha head.

T: Oak, a spicy bit of alcohol, vanilla, cinnamon, with a nice backbone of malt and pumpkin as well as some pumpkin overtones. Pumpkin is dominant, but not overstated.

O: My favorite pumpkin ale. It's delicious! Definitely worth a try.

Poured from a 750 into an oversized wine glass.

A-Deep rich ruby amber with a one inch head that settles to a ring. Marked clarity. Stunning color..amazing looking beer.

S-Fresh pumpkin and some fairly heavy handed spicing, but I do like a spiced ale. Ginger, nutmeg, cardamom. Sweet...pungent.

T-Creamy, bready pumpkin, rich in the initial palate. Highly spiced, but not overly so and a bit hot. Hint of oak on the back end. Very nicely done spiced pumpkin ale.

O-A must buy for my celler for the spiced pumpkin ale fix. Any hotness in this will surely be cured with a bit of aging. Very nice effort.

This beer poured a dark brownish orange when poured slowly into my favorite glass. A dark in color but a clear beer with no cloudiness.
The nose brings hints of pumpkin but not carrying a lot of spice overtones like some pumpkin beers. The oak barrel aging add the certain woody overtone.
The taste is sharp perhaps a little strong on the alcohol side but that is somewhat masked by the very nice oaky taste from the barrel aging. I feel that the pumpkin flavor is a little lost to both the alcohol and the oak aging.
The mouth feel is smooth even with the little alcohol burn at the end.
This a good aged pumpkin beer a little light on the spices in my opinion but the barrel aging helps make up that lack. There is a little alcohol burn at first but did seem to mellow out as the beer warmed a little in my glass.

S - Very light pumpkin. Some nice rice and potato scents too, almost like a good vodka.