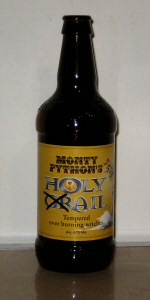 Notes: Draught 4.0% / Bottle 4.7%
Another fine addition to the Black Sheep flock of premium bottle ales. This ale was specially commissioned to commemorate the 30th anniversary of Monty Python in 1999.

Ten years later on the 40th anniversary Holy Grail is still going strong. With more hops than a killer rabbit, it's a full-flavoured golden ale with a distinctively fruity flavour followed by the Black Sheep signature dry finish.

We brew Holy Grail with Maris Otter malt, an old and expensive variety that is renowned for the taste and the quality of the beer it produces.

A mixture of old English Hop varieties including a touch of WGV hops gives Holy Grail its lovely fruity nose.

We use a touch of wheat which helps deliver the lovely creamy head and lacing down the glass - just what you would expect from a proper Yorkshire beer!

More gimmick than beer? Maybe, but it does have all of the trademark flavors: leafy tobacco-like hops, faint buttery, yeasty tones, bready malt, ripe fruit, etc. A well put together beer, but there doesn’t really seem to be any “wow” factor here—nothing pops or jumps out at us. Worth a go even for novelty’s sake though.

Honey gold color & subtle odor. Described as an Amber gold ale, but tastes closers to a pale ale in my opinion. Not promenantly malty like a true Amber ale. Dry finish.

I burst my pimples at you and call your door-opening request a silly thing.

And now for something completely different...

I was in the library perusing a Hugh Wallpole novel when I became a bit peckish for some fermented grain. Dispensing with any pleasantries whatsoever,and curtailing my Hugh Wallpole-ing activities, my good friend (Mr. A.E. Gumby) and I made haste to the nearest purveyor of said grain to try some Monty Python's Holy Ail.

Presentation: 1pt 9fl oz amber bottle with elderberries (of which your father smelt) cast in the glass bottle itself. Printed on the bottle itself are the letters: "BBE Apr 03". Purchased strictly on the fact that this beer has "Monty Python" on it.

Appearance: Looking somewhat a 1969 Coc Du Rod Lever (which itself boasts a fine bouqet of Aborigenese armpit), this quaffable entity poured a smashing copper color with a huge (despite a non-aggressive pour) frothy head that laced the glass quite nicely.

Aroma: Clearly lacking any aroma of burned witches (over which this beer was supposedly tempered), I nonetheless could perceive an "earthy" hoppy aroma (albeit mixed with a whiff of fruit bat).

Taste: Not a bad beer, but one that I wouldn't purchase again. Flavor was definitely "earthy" and also had a rather metallic aftertaste to it, combined with the hoppy flavor. I should think that this beer would go well with some Japanese sage darby or Norweiegan beaver cheese (though one would be advised not to try these cheeses with a dog turd and tonic).

Drinkability: The earthy flavor and metallic aftertaste really rubbed me the wrong way. This was a one-time purchase.

All Monty Python references aside, not much to this beer other than the label.

Hopefully the smell of burning witches isn't imparted on the beer.

Very nice looking ale, a hazy copper color with a very thick, foamy white head that takes it's time receded to a small white cap. I noticed lacing clinging to the sides of my ale glass all the way to the top.

almost a malt vinegar smell, the kind you get from rotting crap apples. Some malt sweetness in there as well.


Big blast of hop bitterness right away. The apple-like malt follows quickly. Found it was more carbonated than I expected, Hop finish that resembles an IPA at the end. Maybe a touch on the sour side as well.

a bit fizzy, especially at the initial swig stage.

Something about this was really good. I loved the flavor of this beer. Super drinkable with a nice mouth feel and interesting flavor. good citrus flavor with some pine from hops. It wasn't very carbonated, but thats fine by me. I would love to have this again. I highly recommend this if you want a drinkable beer thats different than the from the usual.

Had this one a while back, but was so s**t-faced I don't remember what I thought of it. Anyway, saw it again and had to grab it. I mean really, anything tempered over burning witches can't be bad, right? Well, for what I can only regard as a novelty beer, it's not bad. Not too bitter, nothing sweet, and with decent carbonation. It's beer. Very drinkable. I could easily pound a bunch of these and have a great time. Recommendable. Cheers!

This Holy Grail  pours a deep gold, almost orange color. This ale gave off a tight thick white head that left a very thin lace in the end. The aroma was more grassy than hoppy. Hints of wet hay hit the nose, nothing over impressive. There is a bit of malt sweetness present. The taste starts of with a malt start but the grassy hops flavor hits in. The flavor has a TWANG at the end, maybe sour apples? Over all a very nice bit above average enjoyable ale. Now I must find a shrubbery and cut it down with a herring.

Poured from the bottle into a pint glass, beer is a light amber color with a two-finger, off-white, thick head. Smell is not overwhelming but pleasant, with a slight sweetness and bit of hops. The flavor has a sweet fruitiness about it but is well balanced by a moderate hop profile. The mouthfeel is medium bodied with little carbonation. This is a drinkable beer, not bad but nothing outstanding either.

A: Pours a clear copper color with a nice bubbly white head. Carbonation is ample. Retention is not good and neither is the lacing.

S: Malt sweetness and hops that are grassy. Also a faint aroma of some fruits.

T/M: Goes down smooth with a clean aftertaste. For the actual taste this beer is well balanced with nice chewy malts and solid hops. Some citrus with a little bit of a herbal kick.

O: Very good brew and easy to drink. Solid taste, nothing extra ordinary, yet I want another pint. Can't go wrong with that. especially since my first impression of the beer even before I tried it was that it had to be some novelty brew. I was wrong.

16.9oz bottle with Monty Python inspired label. Poured a medium amber with good amount of head and carbonation. Head had good retention and good lacing. The smell was above average. The taste however was disappointing. I'll admit that this is not my normal sytle of beer but even so it was lackluster. After looking at the other reviews, maybe I had a bad bottle but since I got it from Whole Foods which is normally top notch I doubt it. Worth a try once but not twice. PR 2.0 LMH.

Pours a copper color with a rather large white head that leaves good lacing throughout.

A biscuity smell is the most present with some hop smells as well.

The hops hit upfront, but are not strong and it is followed by a taste that is mostly bread-like. There is a hint of sweetness in the finish as well. Nothing too complex here, which lends to the difficulty in searching for descriptives.

This brew goes down easy, and it would make a good session brew.

I would not go out of my way to buy this again, but it was worth a shot for the novelty, and it was a fairly pleasant brew to boot. Definitely worth a shot.

Poured from draft into a pint glass at Frisco's Grille, Columbia, MD.

A- Pours a light brown, with a dark tan head.

D- An okay beer, nothing to seek out.

12oz bottle purchased at McKinnon's in Salem. Pours a crystal-clear amber body with a good inch of short-lived off-white head. Smells biscuity with hints of nut and hay. Tastes malty for sure, with hints of nut, biscuit, butter, and herbal hops. Light bodied with ample carbonation. A pleasant, drinkable, subtle brew. Not horrible, but not much going on here really. Similar to Bass in many way. Not bad.

let me blow the dust of this here keyboard. Back in the saddle, kemosabe. Enjoying this beer with some reheated pizza- a meal fit for a king.

A- Clarity is king- see right through this one. A burned orange color, a bit darker than I expected, 1 finger head that settles quickly. Middle of the road- no knocks on it but nothing impressive either.

S- I get some sweet bready malt, it's a fairly pleasing nose. I like it. Simple, but hey, it works.

T- The pale malts come through again, slightly fruity, floral, sweet and simple. Not much else, though. In fact, this beer feels lacking... I see some other reviewers mention hops but I taste none. No freshness date, but this one's gotta have a bit o' time on it I think.

O- One and done- it was a freebie, and went well with the pie- but the label is more appealing than the beer. Oh well, not bad.

Poured a clear amber/tan body with a white head.

Medium bodied and a bit creamy. Classic bready, biscuit malt flavor. Definitely an herbal, grassy and slightly apple like fruity hop character. Hop bitterness is surprisingly present and almost borders on an english ESB or Brown Ale. Again, earthy, leafy some mild dirt or even tobacco leaf sorts of taste. Ends rather dry with a punch of bitterness.

I overheard someone at the store decide not to buy this beer because they thought it was joke, and personally I was expecting about the same. After tasting it though.. It's really quite good. Classic English pale ale. This beer could hold it's own against any fullers or youngs any day of the week. Might be amazing on cask.

A: The beer is clear but dark mahogany in color and has a moderate amount of visible carbonation. It poured with a finger high dense off white head that died down, leaving a large patch of bubbles on the surface, a thick collar around the edge of the glass, and lots of lacy rings of bubbles down the sides of the glass.
S: Light aromas of apples, toffee and lemon citrus are present in the nose.
T: The taste has flavors of fruity yeast and toffee along with some hints of chocolate malts. Bits of sweetness are also perceptible.
M: It feels light-bodied on the palate and has a moderate amount of carbonation. A bit of dryness is noticeable towards the finish.
O: This beer is very easy to drink and can be considered sessionable. It's rather complex for a light-bodied beer.