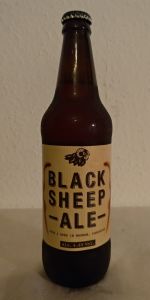 This was purchased for me by my in-laws while they were in England (shhh, don't tell them I can get it in Georgia) and brought back just for me. It poured a nice amber with a decent head that stuck with the beer as I drank it. It had less chunks that the Hen's Tooth I had from England (but chunks are okay). Perhaps this was because I gave this one more time to sit. Anyway, the cool thing about this beer is that I tasted and smelled flavors I've never tasted or smelled in beer before. The smell was like an English garden--lemongrass, cut grass, lemon thyme, orange blossom, and something floral like lavender, honeysuckle, or heather. The beer tasted great! It was well balanced between the carmelly and slightly buttery malts, the bitter and citrusy hops, and then, coming through toward the end of the glass, lemons, grapefruits, and tangerines. Also toward the end of the glass, a new garden smell came through--Mint. Really! My wife commented that it smelled more like clover, but I swear it was mint and could almost start to tast it. This beer started out so-so, but finished grand. All in all, it did very well with the somewhat greasy shepherd's pie that had cheddar cheese, onions, tabasco, and herbed mashed potatos. Nothing like pairing traditional English pub food with traditional English pub ale. High marks all around!

An outstanding English pale Ale. Lots of bread, peaches, and pears in the nose and flavor. Hopped for balance, while adding a mellow spiciness over the firm malt base. Lightly grainy in flavor, but not to deter. Round, yet smooth feel. Thins a bit into the finish for easy drinking. A good beer for any occasion.

Pours an clear orange-honey color with a moderate and multi sized bubble cream colred head from a 16.9 oz. tapered neck bottle. Head disipates quickly if you fail to give it a forceful pour.

Scents of crabapples, followed by other fruity esters. Yeasty and crisp. Very fresh and clean.

Mouthfeel is delightful. Airy and kinetic with a good dose of playful carbonation. Light-medium bodied with a crisp semi-dry finish.

Drinkability is very generous. Quenching with a lot of interesting flavors that will keep curious drinkers coming back for more.

Overall a zesty and high quality ale. A perfect balance of sweet and dry with a crisp and slight tart component also. Complex but very approachable. A great year-round offering for beginners to veterans. A fine english ale indeed.

The aroma was off-putting initially, but it eventually grew on me. Nose is caramel, malt, tea leaves, a touch of hops. The hops initially smelled off, but it passed once it warmed up.

Taste is bitter, malty, fairly decent. Typical for the style, with a lingering bitter finish.

Mouthfeel is about right for an EPA, about all I can say.

A decent English pale, but at the price point it's not one I'll regularly pick up. Bitter and full, but not memorable.

Not really my beer but drinkable. I expected a black beer but this one is goldenyellow with a fairly decent head. Nice lacing in the glass. Bitter taste and the funny part is that you do not really notice that this beer is low on alcohol.

Smell is fruity with a sour undertone something like a Lambic with a bit of horse blanket smell.

Taste is mildly sweet then apples then a dry bitterness at the end. Gets drier and more astringent as you drink it. More bitter than expected.

An interesting brew don't think I would buy it again though.

The pour was a light copper/red with a two finger head that quickly dissapated and left a light white lace on top of the beer.

The smell was very sweet up front with an almost bread like maltiness in the middle of the nose. In fact I dare say it was one of the most complex smelling beers I've ever had.

The drink started with a kick of sweet malt followed by very light hops and a clean watery finish. This to me is the only place this beer lacked in any way. It just seemed too thin in the flavor department.

All and all a very good beer worthy of a try and one to keep for future B.A.'s in training.

A: Amber colored with a big head.

T: Lots of malt and yeast - very good. Slight hop taste, but it is subdued

Although I would not rate this beer as perfect, it is one of my favorites. Its a go to beer for me, and would recommend that you give it a try if you havent yet.

Poured into an imperial pint glass, formed a 1" off-white head over the slightly cloudy, orangey- amber brew. Head is frothy and lasts well, with nice lacing. Aroma is a light pale malt sweetness with bitterness apparent as well. Taste well-balanced, yet delicate bitterness rears its head upon the swallow. Right what I expect from the style. Mouthfeel is nice and smooth, and drinkability is great. Check it out, this one's worth the trouble for a single visit or a session. Imagine it on cask at the source land, mmm...

Cheers to the neighbor for hooking me up with a bottle of this stuff.

A - Pours a hazy copper colour with a brown hue, solid finger of beige head with solid retention and some nice sticky lacing.

T - Much like the nose, though the citrus hops do come through nicely. A bready, musty caramel lingers on the tongue alongside a grassy wheat finish.

M - A lighter bodied ale that goes down smooth and is refreshing, though can come across as a tad thin.

O - Nothing overwhelming on the palette, but certainly poundable. Nice light, crisp, English Ale that is definitely worth a try.

Very impressive three-finger head that leaves a thin tight ring on the glass as I consume the beer. (The remained much like the remaining bubbles of a rootbeer float) Slightly cloudy, dark honey/amber in color.

More caramel malt aromas than anything else. Comes across as buttery and sweet. Very little hop in the smell.

The body is quite creamy. The hop is no longer missing--in fact, it defines the taste from sip to swallow and aftertaste. This is a very traditional English bitter, perhaps the very best I've ever had in a bottle.

Nice crisp aroma with fruit and sweetness notes along with slight grape notes.

Medium body, smooth with medium carbonation. Crisp hops up front move to a light sweetness with biscuit flavors as well. Slightly bitter in the finish.

Appearance: This poured a clear orange amber color with a big white foamy head. It looks like a root beer float head due to the frothyness.

Smell: The aroma is lightly hoppy with some nice fruitiness.

Taste: Delicious. Id say the hops and malt flavor is fairly blended and even in balance. The fruit is nice but less apparent than it was in the nose. Nutty and sweet with just the right amount of bitterness. The more you drink the more the light floral hops kick in.

MF/d: This brew is smooth and tingly to the mouth but has an moderate feel. The 16.9 ounce size is PERFECT. It is very drinkable but that is plenty for me. After this one you will have quite the malt mouth.

Light amber or auburn, clear and seemed to lack carbonation. At the same time, there was a generous two finger head with good lacing and decent retention ... go figure! The smell is of hay, floral notes, some sweetness. Taste is crisp, dry yet full textured, a bit sweet there as well. Some hops, bitterness is balanced in the finish with a mildly malty aftertaste. I've always enjoyed this English Pale Ale and tonight was no exception, some of my scores were rounded down but could have gone the other way.

Poured from a 16.9oz bottle with no freshness date. Comes out a very clear amber color topped by a frothy white head. There is a good amount of thick rings of lacing.The aroma is a fruity grape and wine type accompanied by some cocoa and caramel smells.

The taste has a few hints of coffee and roasted malt flavor that is well blended with some bitter hoppiness. I also detect some sweet flavors too. The mouthfeel is dry and nicely hopped.

S - Herbal and fruity hops, and some bready malts.

T - Grassy, herbal, and fruity (apple) hop taste. Not kick you in the tongue but subtle hops. The base of this beer is a bready, grainy malt. Slight sweetness.

Notes: This was hard to put my finger on how I felt exactly about this. However this is toward the top for easy to drink subtle flavor that builds while you drink it.

There's an almost medicinal sweetness on the nose, that initially assaults you. Also the obvious brashness of English hop varieties - they lack the fragrance I love in a pale ale. Overall, it's not very strong, but not bad.

Menthol-hop characters on the palate. Quite strong but quite one-dimensional, it's just one long gum-sucking flavour. There's a very light sweetness at the start, but then it's just the biting hop character and a rather dry finish. Mouthfeel is quite smooth.

It's not a bad drop, but it doesn't have a huge amount of complexity to it. Drinkable enough, in its way, but there are English Pales I like a whole lot more.

a-light amber brown color with about 1.5 fingers of off white head with moderate lacing

This beer is ridiculously smooth! the only thing that i didn't love was the mouthfeel was a bit thin, but overally a very tasty and smooth ale. Don't drink this one too cold as all flavor is severly diminished (more so than most beers i think)