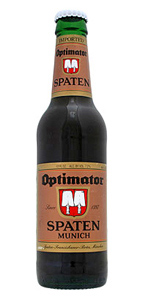 havent had a beer in 2 and a half months, trying to lose weight. but I saw this movie on TV
"how beer saved the world"
http://www.imdb.com/title/tt1832368/
and it "inspired" me to have at least one for old time's sake:
so I found this dopplebock at the supermarket that I'd never tried before:

Poured from the 500 ml bottle into my new belgium goblet:

A: color - just a bit blonder than a cola? with a nice ruby red hue when held to the light. also unexpectedly clear. forms a rocky head of only about 1 finger that settles really quick leaving barely any lacing.

S - Sweet malt to the nose, with just a touch of an ABV undertone.

T - HOO AHH - very nice. Malt and raisins? the alcohol burn is "discreet" on the tounge.

M not as heavy as I'd like/expect. also a very faint hoppiness appears on the aftertaste.

(as usual everything more pronounced as the brew warms, found myself deliberately trying to warm the goblet with both hands as I neared the halfway point.

D - Very Nice, but a bit heavy for sessioning.

Overall somehow better than the sum of its parts, definitely recommended.
oh and BTW thanks for the comfy buzz! maybe I'll have another come Thanksgiving.

This is my favorite beer. It made me explore the world of craft beer

... and, this is really a very fine Dobbelbach. Brings back memories of Munich... anyway, pours a rich dark brown with a creamy 1/4" head. Rich sweet flavor; very smooth. This is just bond warming on a chilly autumn night. Would share this with friends or guests any day of the week.

Poured into an over sized wine glass Optimator is a delicious malty Doppel Bock with Caramel and toasted malt notes. Definitely a cooler weather brew. Not as good as Paulaner Salvator Double Bock though!
Still can't go wrong with Optimator!
Why don't any American or Californian's brew a Bock or Doppel Bock ? All the so called "Micro Breweries" think the more Hops the better. Adding more Horsepower to a car doesn't necessarily make it better unless you add bigger brakes, suspension etc...
I don't drink those "New Jack" beers that taste like my Dad made it at home. Unless I'm drinking his.

From a bottle: dark amber color, transparent. Prominent sweet smell typical of a dopplebock. This is one sweet malty beer: lots of caramel, brown sugar. Restrained hop presence. The beer is very viscous. From a bottle, I thought it was a bit flat and didnt retain its head very long. I initially tried this beer on tap and thought it was divine; the carbonation and head retention was excellent and the deep malty flavors perfect for the style. I have tried it in bottles afterwards and I think it is underwhelming by comparison. The first bottle had weird off metallic phenol flavors. The second wasn't obviously spoiled but didn't have the feel of the beer on tap. I think the bottom line is, this beer is pretty average in a bottle. Probably the style just doesn't store well. If you can find it on tap, go for it!

This one sells for $7.49 a sixer at my local. When it shows up I buy as much as I can carry. Remarkable sum of the parts beer beginning with rich deep color, full mouth filling flavor and texture, so lavish it's hard to swallow because you want to keep on tasting. Malt forward, hops supporting like a beautiful sonorous piano backed by a string orchestra. Fortunately the aftertaste is a receding diminishment of the same. Another one to seek out wherever found.

nose is not too assertive....bready caramel but a bit thin

flavor is full but mouthfeel less full-bodied (a bit more carbonated than i remember)...getting that lovely dark dried fruit preserves (raisins), bready/malty backbone that lingers a bit then fades fast...sure, the ABV is sensed, but very easy to drink....complex enough for what this is...an excellent example and a go-to for seasoned and newbies....

wait! hold the presses! i just felt something was missing...

i decided to pour the 3/4 that was left into a tall mega-pilsen glass...what a difference...skinnier, undimpled glass allows more light into this still very dark amber doppelbock...head lingers much longer and continues to lace as it slowly settles....nose stays the same...taste alters quite a bit, so am pleased to get more malt backbone, a more mellowed sweet dried-fruit marmalade note (actually a lemon-meringue instance, too)...so a citrus, oranginess comes through...the mouthfeel 'seems' less thin and the effervescence is not so distracting. interesting. still highly recommended.

dark dark brown color, almost black. This beer is delicious, but at times overwhelmingly alcoholic. I feel like this is the kind of beer Thor would drink as a night cap. Incredible German flavors and craftsmanship!

not really a fan of this style but this was good. once you get used to the malt this beer gets pretty good with notes of dark fruit and bread with a nice clean finish. def a sipper for me but the representation of the style seems spot on. great color. nose is not for me. flavor profile is actually really nice if you enjoy it rather than pound it. won't get again cause im an ipa guy but wouldn't turn down if offered. glad I tried it.

Appearance: Rich deep dark copper with a light tan head that dissipates to a sticky lace.

Smell: Hints of caramel, sweet and toasted malt. Some spicy alcohol fumes and a trace of apple peel aroma.

Taste: Thick and huge stodgy malt, caramel, rounded toasted malt, sweet dextrins and grain lets through a twang of alcohol and a thin leafy hop. A remaining dextrinous toasted malt, a ever so fading hop leaf and drying grain are in the end.

Notes: Ahhh ... a meal in a bottle. Breakfast anyone? If beer is measured by its malt back bone than this is a body builder beer. 7.2 abv with a 12 month self life.

Toasted caramel aroma and solid malty caramel body. Finish is sweet and moderately bitter with nice separation between the flavors. Not as good as Celebrator IMHO, but pushes a close second.

Cocoa flavor in the background, strong malt flavors. This has been my introduction into the world of doppel-bock. One of the most satisfying beers I've had the pleasure of drinking.
Contemplative, superb.

This beer takes on a rich flavor with a distinct malty taste. I enjoy it's chocolate and amber flavors. You get just enough without it being to overpowering. This beer also has a nice alcohol percentage of 7.2% which is just right for this style of beer, you tend to not notice the alcohol with the balance of the malt.

Love this beer. It sets the standards for everything I personally love about beers. Truly a great beer IMO.

Maly, malty, malty! Pours a dark brownish ruby color with a foamy and bubbly white head that fades into a nice lace. Nose is dominated by sweet toasted malts with notes of caramel. Thick and chewy in the mouth with tastes of sweet malts, rich buttery toffee, caramel, and raisin. Oily hops create a bit of a slick feeling in the mouth and a touch of bitterness leaves a semi-dry finish. For the malt fans, this is a great beer.

Pours a beautifully clear dark chestnut with a creamy eggshell head. Mild lacing on the glass.

Sweet and malty upfront with a subtle nuttiness. A slight notion of hops appears just before it finishes sweet and malty.

A good drinking dopplebock. I will revisit this one again.

A: Medium dark brown. Pretty heavy carbonation as bubbles cling to the insides of the glass. Pours a 2 finger frothy brownish head. Settles fairly slowly and unevenly. Eventually leaves just a little blanket of bubbly carbonation on the surface. Some clingy, brownish lacing, but mostly retreats back into the body of the brew.

S: Molasses, brown sugar, and caramel. A touch of grain, but the sweet aromatic components mostly drown that out. Not cloying though.

T: Although the nose doesn't produce the malt, the palette does. A dark roasted coffee malt, with subtly sweet molasses and raisin components. A little peaty tone comes out as well.

M: Has kind of a syrupy texture to it, but a bit lighter watery/airiness. Malty in the front, subtly sweet in the middle, peaty in the end. Has a pretty dry pungent finish to it.

D: Light enough to be able to drink through without much resistance, but heavy enough to want to sip and enjoy.

Great atmosphere. Appearance is very solid. Dark and rich with a nice full head. Nose is a great combination of sweet, but not overly so, components. Flavor is malty with subtle sweetness, but not enough to deduct from the roasted malty goodness. Overall, this is a great quaff.

T - Malts and lots of them of varying lineages... Apple butter... Cherry... Slight hops and alcohol on finish...

D - Heavy, but enjoyable... Complex... I think it would take several tasting to get a thorough understanding of this beer... I may just be willing to do that given the high quality of the brew...

Poured from 16.9 oz bottle into a pint glass.

Smell: thick malt with a little pear aroma tossed in. It's also got a bit of an unctuous tartness in there which I feel I cannot adequately describe. Still, pretty interesting.

Taste: lots of malt which develops into the same pear/tree fruit that was present in the aroma. Fruity is a good word to describe it, but it is a heavy, syrupy fruity which means serious business. I don't know from doppelbocks, but this tastes pretty good to me.

Mouthfeel: big body but it doesn't coat the mouth like syrup. Pretty good.

Drinkability: this stuff is pretty tasty to me, but it is a little bit of a one-note song (OK, a two-note song--malt and pears--but you get the idea). I'll finish this one gladly, but it's a little sweet and monotonous to session.

Appearance: Excellent tan lacing that remains on the glass. Blood red; perfect to the Halloween season.

Taste/Mouthfeel: Initially some dry smokey grass. Oak follows with a hint of raisin. Mouthfeel starts nice and yeasty and is a bit thin overall. Despite this, it makes a nice crisp and bold comeback in the finish.