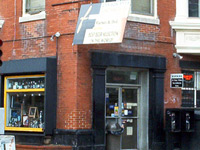 View: Place Reviews
Reviews: 124 | Ratings: 149 | Log in to view all ratings and sort
Reviews by nlmartin:

Wow! Holy singles selection Batman. This was a treasure trove of beers I havent seen in Cincinnati. There was Heavyweight, Yards, Troegs, Victory St. Boisterous, Sly Fox. Needless to say I bought a lot of beer that day. The selection appears pretty dam good overall. If you cannot find a beer you would drink here, you dont like beer. The prices are actually pretty good considering PA beer laws. The staff was friendly and knowledgeable and offered help finding beers. The place is clean and well lighted. The majority of the beers are kept in coolers. They encouraged buying mixed six packs of beer. A full mixed six pack was worth a 10% discount. I will stop back at the Foodery anytime I am in Philly.

This place has kind of a pizza joint look with the combination of brick and metal. I asked the guy at the front how it worked (because I am not a man baby that pretends to know everything), and he explained to grab a table and order at the bar. I had the sausage sandwich with long hots which was very good. The beer list was fine, though not extensive. Again, it didn't have to be either. There were several coolers with cans and bottles that I didn't get a chance to check out. Overall, a pretty solid place that I would grab a bite at once a week if I lived in Philly.

First found this place around 2003 and, not knowing its name, friends and I had referred to it as '10th and Pine' for awhile. This was my go-to spot in Philly for single bottles back in the day, until the NoLibs location opened. Used to be able to find some rare or hard-to-find beers in here, but I either must have by now had them all, or the outliers no longer find their way here in great number (wistfully recall Hair of the Dog items being somewhat regularly stashed away on the shelves in the back corner). Then again, I usually go by what's on the shelves, never really prodding the staff for info on any gems hidden below in the basement.

Despite its name and the tasty deli offerings at their NoLibs location, I can't for the life of me ever remember seeing anyone ordering or making any deli sandwiches here and, as of my most recent visit a couple weeks ago, it would sort of appear that the deli portion of this joint is retired. Could be wrong, never inquired. While it lacks sandwich, it does have a ton of snacks available and that, besides the beer, was why I'd go out of my way to pop by and indulge. I also wistfully recall having found a pint of Haagen Dazs 'German Chocolate Cake', which was out of this world. Never saw it anywhere else. Maybe it was a dream.

Over the years, the staff often offers help, but I only engage them if I'm on edge about finding an elusive, un-had brew. Some sport of a cashier back in the day almost allowed me (in an inebriate episode) to buy a magnum-size Rogue Shakespeare Stout, however, upon checkout, one of my colleagues astutely pointed out the maggots encrusted on the interior bottle neck, and a breached seal/cork was discovered. Bottle permanently removed following revelation (I would assume).

Not too many needs or wants found in ol' 10th and Pine these days, but I do still make it a point of popping in now and again. Occasionally, I walk away with something to satisfy my cravings.

A nice bottle selection, though not much to go crazy for. The bar service was fairly quick, though not personable. The tap list looked decent, but small. (4-6 total?) the water station was unique... Three different types of water for all your hydration needs.

Neat hybrid of bottle shop and bar that has been springing up in beer centric cities for the last few years, this is apparently one of the originals. The service was good, the beer seemed to be well taken care of. The selection of draft beer is small but nicely balanced, the selection of bottles is huge, buy honestly not anything special. Worth a stop if you are nearby and it is too crowded elsewhere, but you really can find a better beer selection elsewhere in this city with ease.

I found one employee there who was super knowledgeable about beer and he was extremely helpful to me. Overall, I think this foodery had beer that may be rare to people not from Philadelphia, but for those who live there, it does not appear to have anything unusual, rare, or hard to find.

A decent amount of domestic and international craft brews. The place however looks a bit messy and crowded. Also there are no prices on any of their beers so it's hard to know whether you're staying on budget or not.

This Foodery is a little more limited in terms of selection compared to the Foodery at Northern Liberties due to their limited store space, but they pack or at least try to pack as much of a punch into the shop as they can.

Although the store front is almost hallf the size of Nor Libs', the Washington Square location seems to get all the same seasonal/rare imports that the other Fooderies get as well. (case in point: I bought a four-pack of Goose Isand Bourbon County Stout here, as well as the last bottle of Bourbon County Coffee Stout)

Don't buy food here as the groceries/food is a front for laundering beer (Due to, I'm assuming, the oh-so-strange Philadelphia alcohol laws). If you're looking for good beer and are too lazy/scared to take the Market-Frankford line to Girard, then the Washington Square Foodery is for you.