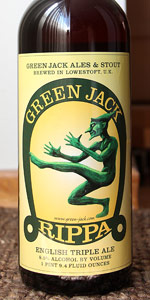 t: Lightly sweet up front with hints of fruity potpourri, some toffee, and some mineral-y biscuits. Strong, grassy hop finish with lingering aspirin bitterness and some heat.

o: I've never had anything quite like this. Inspired by Belgian Tripels... but this was pretty hoppy. I'd call it an English DIPA and a good one at that.

A: Pours a cloudy dark amber with a fair amount of dense off-white head. This retains reasonably well, leaving mild walls of lacing.

S: Bready sweetness and hops with an underlying barleywine-esque note.

T: Sweet, though not overly so, with a long-lasting malt note. There is a slightly boozy touch of something like rum. Good depth and complexity.

Overall, quite a nice beer. It doesn't taste as strong as it is, except for the depth and complexity of the flavors.

A: The beer is very hazy dark yellowish brown in color. It poured with a finger high off tan colored head that gradually died down, consistently leaving a thin head covering the surface and a little lacing down the sides of the glass.
S: Light aromas of Belgian yeast are present in the nose along with some hints of grassy and herbal hops.
T: The taste has complex flavors of Belgian and earthy yeast and mineral water along with notes of herbal hops and hints of grainy malts and fruity yeast.
M: It feels medium-bodied on the palate and has a moderate amount of carbonation with ever so slight bits of warming from the alcohol, particularly after the beer warms up.
O: Upon first smelling the aroma of this beer, you quickly realize that this is quite unlike other English Barleywines in that it has a lot of Belgian flair, most notably from the yeast strain. It tastes a little like a Tripel.

On tap at Kings Row Gastropub in Pasadena, CA.

Pours a murky orange with a foamy orange-tan head that settles to a film on top of the beer. Thick rings of lace line the glass on the drink down. Smell is of malt, grain, and citrus zest aromas. Taste is much the same with citrus zest and malt flavors on the finish. There is a mild amount of hop bitterness on the palate with each sip. This beer has a lower level of carbonation with a slightly crisp mouthfeel. Overall, this is a pretty good beer that is tasty but smells much better in my opinion.

Poured into an Elysian snifter. Pours a lightly hazy caramel amber with a fine one finger light tan head with good retention and lots of lacing. Aroma of sweet caramel malt and lightly sour apples. Flavor of caramel malt, apple and pear, light citrus and grassy hops, which dominate the slightly drier finish; slightly spicy. Slight Belgian yeast hings. Very pleasant medium to heavy creamy body. An idiosynchratic take on an English barleywine, with claims to be inspired by Belgian tripels. Except for the minor yeast component, I don't see much of the Belgian influence, but I totally buy that if there was an English tripel style, this would fit the bill. Malty with pleasant light fruit notes make this an interesting ale. Unusual, but I liked it a lot.

Poured from 750mL swing-top bottle into a tulip. Bottled 2/27/2013. The label says this is an "English Tripel Ale", although other sources call this indeed a barleywine.

Appearance: very dark golden hue with a moderate haze to the body. Effervescence seems quite mild, but the head is three plus fingers of frothy tan/ivory foam with a good retention and lace.

Smell: sweet malt which has both tripel and English barleywine character to it -- definitely what the label promises. There's a mild, noble hop character which sort of helps balance the sweetness, although there's also a cidery character which works the other way. An interesting brew.

Taste: rich malt, again walking the line between tripel and barleywine. There's a big toffee character which suggests more of the barleywine style, as well as a bit of diacetyl butteriness. The latter really hits my appreciation for the beer, but if it's your thing it may not be such a distraction. Hop character is minimal.

Mouthfeel: medium body with a great big carbonation and a rather smooth, satisfying creaminess. Not bad!

Overall: this is not my favorite beer -- the diacetyl really does it in for me. However, for a beer that claims to be an "English tripel", it is pretty successful.

Gravity poured half-pint at the Kings Head, Norwich on 20 Apr 2013.

Amber with a thin head, looked clean and clear.

Sweet biscuity malt smell and taste: fruity biscuit with a sour, almost off (as in a vinegar hint) note towards the finish, complex and interesting, I liked it.

Green Jack Rippa from Green Jack Brewery / The Triangle Tavern
Beer rating: 83 out of 100 with 37 ratings