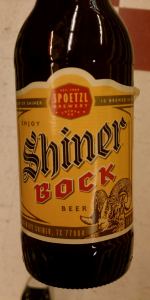 4.98/5  rDev +55.1%
look: 5 | smell: 5 | taste: 5 | feel: 4.75 | overall: 5
A great Texas-take on a German-style beer, which is more lager, than a traditional German Bock beer. Lacing was decent. Smell was very much bread-like and malty and not at all hoppy. Goes down smooth and easy. If you're looking for a more medium body beer that is great to enjoy on a hot day.... this is your beer. And yes.... every drop is still very much brewed in Shiner, Texas. Their brewery tour in Shiner is pretty cool.
Thursday at 06:59 AM

Reviewed by jkrich from Florida

The aroma is somewhat subdued with "lager-like" aromas of spicy malts and faint hops.

Of course, the first thing that comes to mind is that this is quite light and subtle to be an authentic "bock" beer that tends to be full-bodied and somewhat thick; however, this is a good ole American style version that is a thirst-quencher for hot summer days in Texas as well as the rest of the USA. The initial flavor is slightly tangy with malts and hints of molasses. The hop complement and zesty carbonation keep this one refreshing and quaffable. I almost detect a little rye in the aftertaste. At 4.5 % ABV, this one has a lot of flavor. The body is thin and the carbonation is quite high with a slick mouthfeel. I should drink this more often. Good buy from Wal-Mart.

Rated by RamseyHeadrick from Canada (QC)

Reviewed by msf1cnc from California

Rated by sglooney316 from Texas

On the pour a relatively weak 1 finger head forms then dissipates to a ring around the glass. Despite that lively carbonation ensues. The color is darker than amber, solidly brown and crystal clear. Some lacing tries to form a few sips in, but fails.

Aroma is quite light with a decent amount of generic, yet clean lager smell. No hops are really present, which is expected, and some sweet dark malts hide in the back with a vague caramel vanilla note and offset the relatively bright and almost tart lager note. However the aroma is very mild almost bland. Nothing off though.

Flavor follows the smell, but brings more malts with less sweetness. Lager character dominates this beer with malt being more of a background experience, however it is present. Relatively light, and the flavor isn't all that dark or complex.

Feel is easy to put down, but not really a bock. Very light and more like an American lager. In that category however this would do very well. It's light but still maintains body and doesn't just disappear. Nice and bubbly with a decent bite. Still bigger than coors or bud, but nowhere near a real bock.

Overall this is a good beginner beer, to bring someone over from only drinking light colored non hoppy lagers to the darker side of things. Also good for someone who likes lagers and dark beers (mostly lagers) and just doesn't want to think too much. Not complex and closer to an American lager than a bock despite the color. More yeast driven than malt driven, but clean and nothing bad about it other than lack of complexity and inspiration.

Reviewed by joeagain from New Jersey

3.11/5  rDev -3.1%
look: 4 | smell: 3 | taste: 3 | feel: 3 | overall: 3.25
Keeping in mind that this is an American Bock, and not a European style, expect this beer to be less aggressive on all counts.
A medium brown color, light tan head that doesn't last very long. Bubbly, like a soda.
Nose is light malt, no hops at all, which is actually good for the style.
Taste is a light roasted malt flavor with some raisin-like aftertaste. Just the slightest hint of hop bitterness but no hop taste at all. Very, very light body. Too much carbonation for my liking.
Judging this for what it is, it's an okay American bock.

T - Some bitterness up front, but the maltiness takes center stage. Fades quickly. The malt flavors seem like a little caramel and a faint scent of roastiness.

O - As a Texan, I’ve had this many times, but this is my first time since trying more beers for review. The taste is good, but being a bock, the expectation is for “more.” More flavor, stronger flavors, etc. It’s fairly mild overall, but that means it’s easy to drink. Like a lot of the regionally famous beers, it’s highly easy to drink a lot of them. It definitely in my regular rotation, and I’d recommend checking it out just to see what another regional standard tastes like.

An even pour yielded a big eggshell head; decent lace.

A tasty beer. I'd have another.

3.13/5  rDev -2.5%
look: 3.25 | smell: 2.75 | taste: 3.25 | feel: 3.25 | overall: 3.25
Pours a crystal clear mahogany, half-inch off-white head that quickly fades, minimal lacing. Nose is light straw, lemon cleaner, and light roast as it warms - nothing objectionable, but nothing too prominent, either. Taste is a bit more expressive with light toffee sweetness, bread crust, and dark fruit. Mouthfeel has some chew but still drinks on the lighter side. Nothing off or offensive - just solid and sessionable.
Jan 17, 2022

3.2/5  rDev -0.3%
look: 3 | smell: 3 | taste: 3.75 | feel: 2 | overall: 3
If you like tangerines this is for you. It’s basically flavored vodka in beer form so if that suites you go for it no shame in that I just like spiced Christmas beer. Just know going in if it’s your first time that this isn’t a traditional Christmas beer unless you grew up on it. This definitely feels like a classic just not for me
Dec 14, 2021
Rated: 3.27 by Meddwol from Michigan

Reviewed by BillyBoxer from Wisconsin

4.24/5  rDev +32.1%
look: 5 | smell: 3.5 | taste: 4.5 | feel: 4.5 | overall: 4.25
This is such a great go-to beer for a long sitting! The taste is super smooth and easy drinking. This beer definitely deserves a much higher rating than it gets. The low alcohol content and drinkability let you drink for multiple hours in a row without getting tired of the taste or texture. This is the perfect beer for sitting at a bar watching a ball game! I'm happy to be in Texas where this is a staple at the bars
Dec 09, 2021

Reviewed by Bearded1R from West Virginia