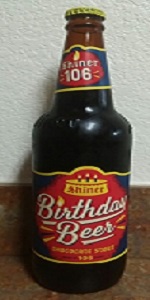 Bought this on a whim as I love stouts, especially chocolate stouts, and this is under $3 for the bomber, so figured why not. Awesome chocolate smell off the bat, had me encouraged, sadly this was the highlight. Moutfeel? Weird. Rather thin, and yes I realize this is a lower ABV stout, but expected more. Almost like water. The taste is just off putting. I guess it's chocolate, but more of the fake imitation chocolate you run across. It reminds me when as a kid my dad would get cheap and buy the store brand chocolate syrup. Yes it's chocolate syrup, but it was obvious it wasn't the real thing. Outside of the nice smell, this beer is a great example for other on how not to make a chocolate stout.

Thin, artificial mess. I had seen some decent reviews for this and figured I would give it a chance when I saw a single

To commemorate my 300th beer review, I am going to do a celebratory beer. What better than Shiner's Happy Birthday Beer.

It smells : Hey! What do you know? It smells like molten lava chocolate cake! Deep, moist chocolate cake. Chocolate frosting. This by far a chocolate beer. Close my eyes and I'd think I was smelling a fresh cupcake. That's it. Just a hint of alcoholic malt. Pretty one noted but totally amazing!

It tastes : light chocolate on the front, followed by a milky, sweet, delicious stout flavor. The malts are very slightly roasted, leading to a baked flavor. It ends with more chocolate.

Overall : I'm going to stop writing so I can enjoy this beer. Fabulous session stout with no off flavors and a milky, silky feel.

Brief initial impressions below. A more detailed review to follow.

I winced upon sipping this for the first time. The chocolate character is brutally artificial, and it has a thin schwarzbier-esque feel and an unbecoming pudding-like stickiness. Overly sweet with no roasted barley presence whatsoever, Birthday Beer is a poor excuse for a stout and is best avoided. I don't know that I could handle a second bottle in one sitting, and will get through the first only with effort.

***
02.17.15: My notes below are still truncated, as this is so shallow and simple that it doesn't warrant a great deal of effort.

Reviewed live as a chocolate stout per the label. Expectations are low given my last experience with this, but I'm keeping an open mind. 5.0% ABV. 2014 vintage. Served cold into a pilsner glass and allowed to warm over the course of consumption.

HEAD: 3 fingers wide. Mocha colour. Nicely cream, with okay softness and thickness. Complexion and consistency could be better. Retention is above average - ~3-4 minutes. Leaves messy webby lacing on the sides of the glass as it recedes.

Looks pretty mundane for a stout, but not awful. Definitely below average, but at least it's not extremely yeasty or bright or anything.

It smells fine - except for the bit where it's supposed to be a beer, not a fat American child's chocolate treat. How about some malts, hops, yeast, or even alcohol in the aroma? This is off-puttingly artificial, and fails to suggest a stout at all. Quite poorly done.

TASTE: Ugh. Artificial chocolate. Evokes mass-produced pre-packaged shitty American chocolate sweets akin to those one would find at an off-brand 7-11 on a road-trip through a flyover state. Crappy chocolate cake, chemically preserved shrink-wrapped cupcakes, horrid artificial chocolate flavouring. Quite off-putting, with no trace of authentic cocoa, chocolate, or chocolate malt at all.

Moreover, it doesn't have the clean yeast profile of a stout or the robust malt backbone of one, and ends up tasting like a horrible attempt at a schwarzbier. Really horribly handled across the board.

To its credit, it doesn't have any yeast presence, overt alcohol, or hop notes. But it's as shallow and simple as can be, and what few notes there are are frankly disgusting.

TEXTURE: Weak. Thin like a schwarzbier, with no real body, weight, or heft on the palate - though I consider this a plus as a fuller body would draw out more of the atrocious fake chocolate flavour. It's overcarbonated, as well. Not watery, fortunately, nor is it oily or dragging or anything. This may be the first beer I call "cakey" - at least in terms of texture. It has this sort of sponginess that gives it an abysmal presence on the palate. Suffice it to say this texture in no way elevates the beer, nor does it even come close to complementing the taste on the most basic of levels. Terrible execution.

OVERALL: I'd have to check my reviews, but there's a chance this is the worst beer I've had this year. It's easily one of - if not *the* - worst attempts at a stout I've ever had, and easily claims the title of Shiner's worst beer (and I consider myself something of a Shiner defender). I'm confounded at how this even made it to market, but it's not so undrinkable that I won't be able to finish my glass; it'll just take effort. I'd strongly recommend avoiding this at all costs.

I can kind of see where they were going if they were trying to do some kind of chocolate cake schwarzbier in keeping with the whole "birthday beer" motif, but please announce that on the bottle so I know to anticipate the meconium that awaits me inside. How did this get past QC!?

Super thin. Smells and tastes artificial. I do not recommend and sent the brewery a note stating such.

I am not great at describing the taste of beer or what 'notes' a beer drinker can derive from a beer, but this stuff tastes like Duncan Hines chocolate cake. No 'notes' of a stout exist in this beer, that is, it does not taste like any stout I have ever had. It tastes and smells exactly like chocolate cake made from a store bought mix. Avoid it and do not buy as a "birthday beer" for your girlfriend as you will both be quite disappointed, unless you don't care for beer, but enjoy cake from a box mix. I could see somebody in those shoes liking it. I only gave a decent rating for the smell because I like the smell of chocolate cake, from a box mix or from scratch. Shiner, you failed once again. Shabbiest brewery in Texas, hands down.

I'm a stout drinker, but I didn't like this at all. Its smell and taste is pure milk chocolate. Unfortunately it comes across as artificial, like an off-brand candy bar leftover from Halloween. No complexity to make you want more after the first sip.

Extremely artificial tasting. The worst chocolate stout I have ever had.

Did I just eat a piece of chocolate cake? Fantastic!

AP: Poured a murky deep rusty brown. Can see light through it. Giant caramel colored head slowly settled into just a faint frosting over the top. Slight residual lacing pooled together very quickly. AR: Smell was over the top death by chocolate. No roast, no nuttiness. Just straight out of the jar sugary frosting. TA: Slightly bitter licorice front gives way to under baked chocolate cake. Tastes like licking the bowl in the finish, mostly yeasty raw egg. MF: Super thin and watery. OA: I was interested to see if the gimmick worked, no I'm pissed I bought two bottles.

Nice full flavor. Like birthday cake in a bottle.

Big chocolate milk aroma...definitely tastes like chocolate as well. More milk chocolate, (than dark chocolate) with sweeter notes. That is a all good but the body on this is really lacking. It is thin and too carbonated....not sure which of those two attributes bothers me more. Probably the carbonation. A nice creamy but thin bodied stout is fine in my book but this drinks too charged up. I'm, tempted to just let it sit for a few hours to see if it drinks any better. They got the chocolate part in there for sure though. I would not buy again.

Sampled last night after bowling on 12/23/14. A BRAND-NEW Shiner brew that just came out in the past couple of weeks. Bottle chilled down to 36 degrees F in my beer cooler and poured in to a tulip glass.

Pours a pitch black (or super close) in color with a good 1-finger beige creamy head that finally settles down to a couple of millimeters after a while. A decent amount of lacing is seen after each sip that sticks to the glass. The aroma of chocolate hits your nose right up front, more than other similar stouts. Pretty much the same for the taste. More like a dark chocolate beer than a stout. Very smooth and goes down very easy. No bitter or harsh aftertaste at all. Medium-bodied and perfect carbonation. Have to say that this is one of the best Shiner brews I have had so far. Great job Shiner!