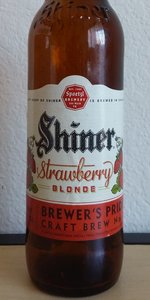 Bought a single can from a somewhat local liquor store. I say somewhat because it is about 15 minutes from my house. That being said, it is the closest liquor store from my house that allows customers to buy singles/create your 6-packs. I did find it interesting that this particular store strictly had cans of this beer and not bottles. At the liquor store where I work, it we only carry it in bottles. Anyhow, when I cracked open the can and took a whiff of the aroma...instant strawberry. Quite fascinating, to be honest. I hope they're being truthful when they said they use real strawberries from Texas. So the smell get's a 5/5 for me, because when it comes to fruit beers, this one smells literally like a fresh strawberry flesh. The look is ok. It essentially looks like yellow/orangish water. Can see right through it. A light white head lingers but will eventually dissapate if let sit too long.

Overall, a very well made beer that I would no doubt order at a restaurant if they had it available. However, it should be worth noting that the more I drank this beer, the more I realized I would never have more than 1 or 2 in one sitting. Its just not that type of beer for me.

Beers that I can have more than 1 or 2 or 3 in a sitting (hence, "crushable beers") would be some of the following: Hoegardden, Kellerweis, Grapefruit Shandy, RAR Groove City, among others. Looking back at my list, I suppose I would put Hefeweizens under beers that I am able to crush, or drink more than 3 of in 1 sitting and still be coherent.

Appearance: The golden body sparkles like a diamond with crystal clarity. There is a nice robust white head but is slowly fizzles out leaving nothing behind but a surfaces that pops with carbonation like a soda. No lacing.

Taste: Up front there is a light strawberry flavor mixed with what tastes like watered down malt with a bit of a biscuit flavor. The aroma gives this expectation of a full flavored beer and then it just takes a nosedive. There is a decent flavor of strawberry but there is literally a "soda water taste" to the beer.

Mouthfeel: The carbonation is good but the body is very thin and the beer doesn't have any "oomph" to it.

Overall: It is a very mediocre beer without any character. What started out looking and smelling nice turned into a disappointing lack of flavor or body. I really wouldn't recommend it even to strawberry beer lovers. There are far better strawberry beers on the market. I won't be drinking it again.

Poured from a 700ml bottle into a pint glass.
LOOK: Pours with a half finger's worth of white foam that dissipates to a line within 30 seconds. Gold in color with a moderate amount of rising bubbles. Lacing is minimal.
SMELL: Has strong aromas of strawberry ice cream that entangle with a hint of pale malts.
TASTE: Initial taste is strong with strawberry ice cream flavors along with mild pale malt flavors. Mild wheat malt flavors enter about 3 seconds after the initial taste as strawberry ice cream flavors persist and pale malt flavors fade to subtle (thankfully because their mix with the strawberries was funky). Just as you think the taste is complete, mild corn adjuncts enter the palate about 2 seconds after the wheat malts (so 5 seconds after initial taste) as all flavors persist.
FEEL: This a very light-bodied beer. High amount of carbonation, yet manages to go down somewhat smoothly. Has a nice crisp finish that leaves you saying, "Ahhhh."
NOTE: If they would tone down the pale malts a little bit more and comeolete get rid of the corn adjuncts, this beer would be phenomenal.

Smells really good. Poured from a 12oz bottle into a pint glass, it has very little head. Color is nice. Flavor is very bland, after taste is crisp to the point of being dry. Overall, I'm not disappointed that I bought it, but I would not buy it again.

well....smell of strawberries....first taste ....cough syrup.....but after that....smell and taste of a bowl of Franken berry cereal. I guess good?!?! Not sure why I bought this family pack in January...more of a summer pack!

Was in a case of "Shiner family beers" and I tasted after two others had sampled and said "not to good" so I was not expecting much. Lite golden with just a hint of reddish hue. Strong strawberry smell but much less strawberry taste. Was more pleased than others, but it was on a very hot day when almost any cold beer (excluding Bud) taste pretty good. Would not turn down one if offered, but not a beer I'll plan to purchase.

Pours a clear golden color with a small carbonated head. Head retention is non-existent. Lacing is minimal. Has a strong strawberry aroma. Not much else there, though. There is a certain amount of spice to the taste. Pale malts. Strong strawberry taste but it doesn't go anywhere. Just ends with a more corn taste you get from adjunct lagers.. Light bodied with heavy carbonation. Not really impressed