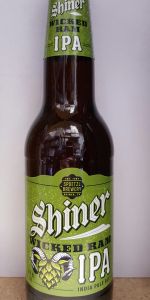 View: Beers
Reviews: 91 | Ratings: 356 | Log in to view all ratings and sort
Reviews by burnerfinger:

A NICE show on the pour, settles in with 2.5 fingers of thick, white head. --golden amber brew

S Nice IPA hoppy scent but not at all overpowering

T nice bite at first, hoppy IPA on the back of the toung

M solid but a bit oily

D have at em!!! nice but not for guzzlin

Deep golden hue, filtered clarity. Good lacing all around. Some caramel, fruitiness, citric hop and herbal hop in the nose. Thin bodied, forced hop bitterness. Some light bready / caramel malt has a hard time melding with the citrus rind grassy hop flavor. A bit warming with some pear-like fruitiness. Decent for an IPA, I'm a fan of the Shiner brand though they should not chase the IPA game.

Aroma: Hops, but fairly low intensity, a mix of citric and earthy with a bread yeast note (Shiner house yeast?)

Overall: Not the hop profile I personally enjoy in an IPA as I like more West Coast citric than the earthy route taken here. Kudos for going fairly big, especially for Shiner which tends to stay middle of the road, but not one of my favorite offerings from them.

Just picked it up at a local grocery store. I was surprised! Not bad at all, and I will pick this up now when I want a session IPA. Pours very nice into a pint glass with a thick white head, foamy lacing, it looks great. A fresh smell, with a lemony and slightly spice taste. Way to go Shiner!

Great session IPA...SHINER is all about session beers and this one is no different...if u are a beer snob that demands in your face flavor then move along otherwise this is an easy drinking IPA THAT WOULD be great for grilling and hot weather.

Pours a hazy orange with a foamy beige head that settles to a partial film on top of the beer. Foamy streaks of lace form around the glass on the drink down. Smell is of malt, citrus zest, and earthy hop aromas. Taste is much the same with citrus zest, grapefruit juice, pine needle, and earthy hop flavors on the finish. There is a mild amount of bitterness on the palate with each sip. This beer has a lower level of carbonation with a slightly crisp mouthfeel. Overall, this is an above average beer that is drinkable, but nothing stands out about this one for the style.

a) Nothing clear about this murky, muddy dark amber body with a lacing head and spotty lace.
s) Low tide, medicine cabinet. Old fruit and mown grass - perhaps on compost pile, slight salt and decay.
t) Follows aroma. Up front moderate bready and caramel malts soaked in a soupy mix of fruit salad sweetness. fall orchard, fallen wet leaves, pine and landing in lingering bitterness.
f) Medium bodied. Not that fresh, but a good bitter dryness in the finish.
o) the over ripe, moldy smell had me checking did I pour into a clean snifter.

L-golden amber with a respectable white head that laces nicely. small bubbles apearent through this quite clear brew.
S- grassy, and earthy, with a hint of lemon in the nose. smells more like a pale ale to me.
T- earthy, and somewhat spicy up front, with a little lemon citrus in the back
F- prickly carbonation on the tongue and a light/medium feel
O- not bad but by no means great. worth a try but not an award if you know what I mean

Not feeling this one all that much. I know it's kind of hip to bash Shiner. That's not where I'm coming from. I like a few of their beers and feel they occupy a unique place in brewing. Having said that, This to me has kind of a corny, adjuncty smell that sets a bad tone and it doesn't stand a chance from there. If Bud, Miller, and or Coors made an IPA I imagine it would turn out something like this.

Notes: Clear amber body beneath a full head of pillowy off-white. Excellent head retention and very good lacing. Aroma of grainy malts and perfumey floral hops with a touch of soapiness. The flavor follows suit. The malt is grainy and wheatey. What are the hops? The label states that they're Crystal (I get that), Bravo (I'm not familiar), and Centennial for dry-hopping (I'm kind of missing that, I get a little bit). It's nice, but it's basic. It's very polished-over. 55 IBUs? I'd be guessing more along the lines of 40 or 45, but I'm no way insinuating that the 55 isn't true. I just don't get any bite out of it - and maybe that's good for some people? What does stand out is the Spoetzl yeast which ties it back to all of the other Shiner beers. Overall I'd call it decent, and I wouldn't turn it down, but I wouldn't seek it out either.

Pours a brilliantly clear gold with a heck of a solid head of foam.

This has a very bitter and somewhat spicy nose; grassy and earthy with a mild hint of biscuit.

Grassy bitterness hits my palate straight from the gate with a bit of lemon zest and a general earthy flavour throughput.

Nice mouthfeel and quite drinkable for a 1 bottle session. Decent IPA.

For Super Bowl Sunday I figured I would write a few reviews for some beers. Decided to start with an IPAA from a brewery that I had never reviewed. It pours your standard golden amber with a nice two finger foamy light tan head. Nose is more malty than hoppy with some woodsy notes. Taste is relatively dry with rye like spiciness and considerable malt backbone. The hops overall really struggled to shine through. This is nicely drinkable, it would be a solid option if nothing else was available. Finishes dry and with a dull bitterness.

On a New Beer Sunday, this represents an occasional opportunity to review a beer in a couple of different serving styles. I begin with my least favorite, the bottle, followed by the CAN, the latter of which will get top billing.

I CANnot tell you how excited I am to add this beer to The CANQuest (tm), especially following on the heels of its bottled version. As such, I Crack!ed it open & since it was a) fresh & b) a 12-fl. oz. CAN, I did an inverted Glug. It came roaring out of the aluminum cylinder & began filling my glass with three fingers of foamy, tawny head that quickly began to fall. Color was Golden-Amber (SRM = > 5, < 7) with NE-quality clarity & so the wicked Gelt Gang of Mammon, Croesus & Midas dropped in for a taste. Nose had a honey-like, lager like sweetness along with a freshly-picked mintiness. Hmmm. Mouthfeel was medium-to-full, not creamy, but bigger than from the bottle. The taste was more sharply oriented towards an AIPA. There was a noticeable, but not pronounced, cattiness along with an earthiness that put me in mind of an EIPA as well as a minty quality like picking fresh mint for tea or juleps next weekend. This was a VERY mellow drink, very reminiscent of hop tea, which I have made, drank & fallen asleep to. Finish was equally mellow & tea-like. The hops were more spicy than bitter and landed somewhere between semi-dry & dry. I could set up a hammock, fill a cooler & just while away the afternoons with this one.

From the bottle: "This Ram Will Let You Grab One by the Horns"; "A Little Wicked Goes a Long Way"; "Over the past hundred years, our brewers have certainly engaged in their fair share of mischief. This beer, however - our first India Pale Ale - has taken a dose of wickedness to brew. Starting with 2-row, caramel and wheat malts, which provide a bright copper color and fuller body, we then add Crystal and Bravo hops for aroma and a classic IPA bite. We finish it off by dry hopping with Centennials [sic] for an even more aromatic flavor. So, crack open a bottle and enjoy how refreshing Wicked can be! - Prosit!"; "Release the Hops!"

Even the screwed-up screw-top cap read "Release the Hops!" and so I did! I then employed a heavy-handed pour to create three-plus fingers of dense, foamy, rocky, French Vanilla-colored head with great retention. It was even kind enough to leave a bunch of sticky lacing as it slowly fell and disappeared. Color was a solid Amber (SRM = > 7, < 9) with NE-quality clarity. Nose was not as hoppy as the verbiage had led me to expect. Instead, it had a woody, oaky smell along with a lager-like honey-like sweetness. Hmm. Mouthfeel was medium. The taste was a wild mélange of grass; honey; hay; light cattiness; some dank; soil, like wet hops had been used; and a general evocation of freshly gardened vegetation. I do not remember ever tasting an AIPA quite like this! It was definitely the sum of its many (especially hops) parts, although the malt may have been producing that honey flavor that was like a soft note running through the middle of the bitterness. Finish was dry, but only lightly bitter. It was a curious drink, to be sure.

Shiner Wicked Ram IPA from Spoetzl Brewery
Beer rating: 78 out of 100 with 356 ratings