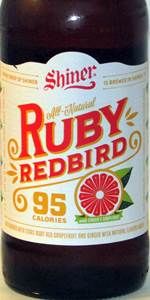 Notes: This refreshing brew is made with juice from freshly picked Texas Ruby Red grapefruits, the prize of the Rio Grande Valley.A bold kick of ginger flavor combines with the tartness of the citrus for a tasty brew that's perfect anytime of year. Pure two row and Munich malts along with Mt. Hood, Citra, and Willamette hops give it a nicely balanced, lip-smacking finish. We like to think popping open this bottle is like slicing into a ripe Texas grapefruit. So pucker up and enjoy!
View: More Beers
Recent ratings and reviews. | Log in to view more ratings + sorting options.
Rated: 3.04 by Danzifer from Ohio

Look: Pours a light copper color with ruby highlights and near clarity. Very rocky, bubbly head (if you can call it a head at all) that dissipated to nothing extremely quickly. Lots of small bubbles rising up in the glass.

Smell: This beer smells like ruby red grapefruit. Has a bit of a "flavor extract" nose to it, which isn't the same as if it was all from actual fruit. It also smells just like ginger ale, which makes sense because there is ginger added to this beer also. Not much else on the nose - some sweetness and maltiness.

Taste: This tastes a lot like a very dry ginger ale with some ruby red grapefruit flavor added. Even more spicy ginger flavor after pouring the bottom of the can.

Feel: Very light. Despite all the carbonation, the finish is kind of flat. The beer lacks the crispness that I was hoping for. All in all, it's still a refreshing beer to drink after a run as I am doing right now.

Overall: Perhaps my expectations were a bit too high for a Shiner beer, but this is a bit disappointing to me. I have had other ruby red grapefruit beers that I enjoyed much more, for example Genesee Ruby Red Kolsch and von Trapp Radler Trail Bier.

From can:
Beer brewed with Texas ruby red grapefruit and ginger with natural flavors added

3.08/5  rDev -3.4%
look: 3 | smell: 3 | taste: 3.25 | feel: 2.75 | overall: 3
Clear gold color with a slight foamy white head that disappears if you blink.
The aroma is faint grapefruit and ginger with a hint of sweet light malt.
The taste is a little more toward the ginger but still definite grapefruit. I'm a little disappointed in the grapefruit flavor being a little weak.The finish is also a little weak light malt.
The body is light with moderate carbonation.
Altogether, this is an OK light beer for lawn mowing or other warm weather cooling, but it could have been much more interesting.

3.28/5  rDev +2.8%
look: 3.25 | smell: 3.25 | taste: 3.25 | feel: 3.5 | overall: 3.25
Pours a translucent amber gold with a nearly non existent head. It smells mostly of ginger with hints of grapefruit underneath. The taste follows the nose and it's mostly grapefruits with a taste of ginger and a very slight maltiness with little bitterness. It's more carbonated than most and very crisp, and goes down easily. Overall not bad but I've had better. Good low calorie option if you don't want regular light beer.
Oct 19, 2020
Rated: 2.89 by entenduintransit from Tennessee

Reviewed by AccipiterofBeer from New York

Reviewed by dkoehler42 from New York

2.27/5  rDev -28.8%
look: 2 | smell: 3 | taste: 2 | feel: 1.75 | overall: 2.25
I bought this on impulse at the local beverage store, based on Shiner's track record with me and that I like grapefruit and ginger. Sadly this did not deliver. This pours an extremely pale straw color and the smell from the bottle is superior. Actually, I like the taste better out of the bottle, and that's not saying much. This is more a seltzer than a beer. I was hoping for the forward flavor of grapefruit and ginger, similar to the way their winter beer delivers the peach flavor. I will not buy this again.
Jun 19, 2020

Reviewed by jettjon from Florida

2.15/5  rDev -32.6%
look: 2.5 | smell: 2.5 | taste: 2 | feel: 2 | overall: 2
Appearance is crystal clear bright golden orange. Very little carb, zero head.
Aroma is faint but it does smell somewhat like fresh cut grapefruit, but no evidence of malt or hops
The taste is where you really start to wonder how this beer is made.
It tastes like a glass of water mixed with a little bud light and a small squirt of grapefruit flavoring. No malt, no hops.
Mouthfeel is simply water.
Overall...it’s pretty bad.

Rated by TBoneJones from Texas

T.F: Thin and watery. Not much flavor... a dash of grapefruit and then it's lost with some light grain something or other going on. Unpleasant as it warms... fizzy.

O: Not worth drinking, even for a low-cal beer. Smells good... tastes kinda crappy. Glad it was just a single.