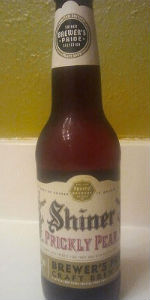 Notes: Doubly good in triple digits, our unique summer seasonal is made with the fruit of the prickly pear, a cactus native to Shiner, Texas. With a tart, citrusy flavor and a crisp finish, it’s the best use of cactus yet.
View: More Beers
Recent ratings and reviews. | Log in to view more ratings + sorting options.
Rated: 3.44 by Danzifer from Ohio

Rated by LisaSpano from Illinois

Appearance: The beer has a gold colored body that has bright clarity. It has a short and fluffy head that is slightly off-white. It has moderate head retention. No lacing. Although the head doesn't last long or seem to coat the glass well, the body looks great even as the head flattens. While drinking the beer all bubbles will eventually disappear and the surface will be glass-flat with just popping carbonation bubbles.

Aroma: The aroma of the beer extends from the glass even before the nose approaches it, as it is poured and sits. It has this raspberry scent from afar. Closer, there are more raspberry and strawberry scents.

Taste: There is a light flavor of raspberry at the beginning and middle. Towards the finish there is a bit of wheat flavor. The flavors feel a little off though, as if it's mixed with tonic water. It's not a bad tasting beer, and in fact it can taste quite good on some sips, but it is not consistent with each sip and at times it becomes questionable.

Mouthfeel: The body is light and crisp with good carbonation. There is an odd bitterness that can crop up from time to time while drinking the beer and also it can feel a bit thin at times.

Overall: It's a bit of an oddball beer in that it is simultaneously good and awkward. The can states that this is a "BEER BREWED WITH PRICKLY PEAR FRUIT AND WITH NATURAL FLAVOR ADDED." It definitely has a fruity, berry-like flavor and aroma which is nice. I could see myself drinking this at a large gathering where somebody brought a bunch to share, but I probably wouldn't buy it over some of the other fruit beer alternatives on the market. It's still worth picking up if you want to try out a new fruit beer or a beer that is made with prickly pear, but I'd recommend trying it as a single or taster before buying more.

Rated by wac9 from Pennsylvania

Rated by Eyedoc27 from Illinois

Reviewed by AngEo from Texas

4.12/5  rDev +22.3%
look: 4 | smell: 3.75 | taste: 4.25 | feel: 4.25 | overall: 4.25
A style I don't like and reviewed with limited knowledge of what a good fruit/vegetable beer is. I will likely update later when I have more experience but that may be a while as I don't actively seek this type of beer out. It was a little sweet for me but this is redeemed as it doesn't taste artificial. Really nice full body that drinks smooths but feels light upon finishing. I can see why this is marketed as a summer beer. I would be happy to throw a few of these back poolside on a hot day. Overall I was GREATLY surprised with how much I liked this beer as I expected nothing and don't care for the style.
Mar 17, 2018
Shiner Prickly Pear from Spoetzl Brewery
Beer rating: 77 out of 100 with 812 ratings