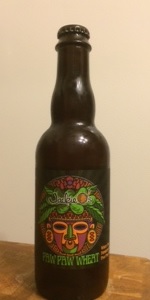 A nice fruit showcase, subtle but sweet paw paw notes. Agreed with the classification here that presents as more of a fruit and field beer with some wheat in the grain bill, rather than a wheat beer with fruit added.

Terrific representation of the Paw Paw. This beer is the original star of the annual Ohio Paw Paw Festival. I appreciate the willingness to play to the Paw Paw. The sweet tropical tones lean towards a NE despite this beer preceding the genre. The appearance is dank and pulpy. An all around beautiful beer.

The pawpaw is a fruit native to Ohio as well as several other states in the south and SE.

I read an article about them recently and, being me, wondered if someone had ever made a pawpaw beer.

Sure enough, Ohio's own Jackie O's makes this fantastic wheat. The fruit adds a sweet, creamy dimension to a high ABV wheat. The combination doesn't taste to me like either a fruit or a wheat beer so much as a unique combination that's smooth and very drinkable, with a very slight tangy sweetness.

I bought a single 12 oz bottle. I should have bought more.

12.7oz bottle courtesy of WesMantooth. Hope I didn't let it sit too long, but at 9%, that might not be an issue. No date on the bottle, as far as I can see.

Hazy, apricot color to this. Looks a bit like a NE style IPA. Minor, half inch off-white head. Dropped somewhat quickly but never entirely died. Lots of tiny bits of sediment can be seen when held up to light.

Fruity aroma that I assume is that of Paw Paw, a fruit I had never heard of before that is apparently big in Ohio! I just get the slightest of hints of wheat.

Like the aroma, the fruit dominates the taste, but earthy wheat notes come through in the finish and, especially, in the aftertaste. The high alcohol content is well hidden.

An interesting fruit beer that delivers a lot of flavor, but isn't a sugary hammer to the head, like lots are. If it wasn't for the very high abv percentage, I'd say this would make a nice warm weather session beer, but the next day would be excruciating. Thanks, Corey!

Classic gold color, thin lacing and just a bit of carbonation. Really enjoyed the nose on this, their is a tradition wheat grain base but the fruit is light, enticing and just a little tart. I have never had paw paw, but envokes aroma of melon, kiwi and orange.

Flavor is refreshing, especially for the abv, with lots of melon and mango flavor coming through, though it is never artificial or cloying. Peppery malt base helps ground it. Some classic wheat banana phenol flavor too. Finishes with a little bitter fruit. All in all a really good easy to drink beer with a unique local twist.

Bottle from my mad grab at jackie o's not too long ago. Had heard such good things about this one, excited to finally try it. Bottle from 2016.

Nice easy drinking wheat beer with a good syrupy fruity flavor...presumably, Paw paw? Little belgian candy and bananas. Comes across like a belgian pale but soft like a wheat.

I got this beer via a beer trade, and I thought it was great. I’ve never had Paw Paw fruit so I am describing the fruity flavors in terms of other fruit.

Look: semi-clear with a golden hue and a thin white head.

Aroma: The aroma is mild wheat and fruit.

Taste: Anyway, the flavor is wheat and lemony, banana, mango, perhaps honey dew. Alcohol is barely noticeable, but neither are hops.

A: initially a slightly hazy gold with some mild carbonation and basically no head. After disturbing sediment: very hazy dark gold with 2 fingers foamy head. Laces very nicely, though retention is as poor as you'd expect at 9%.

S: wheat, definitely. Crisp malt or grain aroma. Some faint fruity hop, but really remarkably little smell. Post sediment: there's the pawpaw! Smells like a pawpaw, which is to say a mild and slightly underripe banana. A little like faint glue solvents. A little alcohol as it warms.

T: like a high ABV wheat beer. Mind you, not 9% - you can get a hint of alcohol, but no way would I guess 9. Off-sweet, grainy arrival. Wheat and alcohol toward the end. No hops to speak of. Post-sediment: quite a bit more complexity, but not by much; pawpaw is definitely there, but it's an understated fruit.

O: this is a very drinkable high gravity wheat beer. The pawpaw is a gimmick. I love wheat beers, particularly when I'm looking for refreshment. This does not give you that. I also love the clove phenols you get in weizenbocks and hefeweizens, but this lacks that, too. So I'd probably not buy this again, though I am glad I tried it. Probably better on draft.

I don't even know how to rate this beer... what is it?

It's stupid sweet and tastes of tropical fruits. Mango, pineapple and papaya dominate. It has a creamy mouthfeel full of sugary thickness. Carbonation is very low. Faint bitterness/staleness after the finish.

Solid fruit/vegetable beer I guess? I don't even know. At 9.2% though I won't buy again. That's a lot of beer space to use on this.

Poured into a Wicked Weed snifter. No freshness date.

A- Pours a hazy dark amber color with a 1/4 inch off-white head that doesn't retain long before becoming a paper-thin ring around the edge of the glass and minimal surface foam. Not much lacing to speak of.

T- Again, typical wheat beer flavor with a bit of extra malt characteristic and body. I will say the alcohol is very well hidden but there's not much flavor complexity to back it up. Once I introduce the yeast, things get a bit more lively and the banana characteristic comes through more. Still, pretty limp overall.

M- Somewhat zesty with medium carbonation and a body leaning toward the lighter side.

O- Not necessarily bad, but it has a weak flavor profile and not much going for it besides how drinkable it is. Got this as an extra in a trade and I wonder about how old it is given the fact that there's no bottle date.

This was a weird beer that defies classification, but not in a tasty way, for me. It's kind of like a light wheatwine, sweet, sticky, oddly biscuity, I don't know.

Appearance: Hazy to cloudy golden yellow with a bit of a glow to it. Some floaters from the sediment, disturbed by the vigorous pour, came along with the pour into the glass. Thin white dense ring of foam with a barest thin skin of foam across the top. Some thick strands of lacing that slowly slid back down the glass.

Smell: A little bit of wheat/graininess, with an underlying fruitiness that is part berry like and part tropical fruit. There is a hint of lemon as well. I'm guessing this is the Paw Paw fruit. Not very strong in aroma.

Taste: Unusual, which I'm guessing is due to the Paw Paw fruit as I've not anything quite like this beer in flavor before. There is some underlying wheat and malt sweetness, and a lot of fruit flavors with some tartness thrown in. Berries, some tropical fruit, maybe some honeydew melon, and a bit of mild bitterness which is a bit herbal.

Mouthfeel: Soft, very smooth, a little chewy, light spicy carbonation under it all that comes out as a delayed response on the tongue and scrubs it a bit.

Overall / Drinkability: Definitely worth a try for the use of a local Ohio unusual ingredient. I wonder how this fruit would work in a Lambic. At the price though, this isn't something I would get often. Might be worth trying again fresh on tap to see how the flavors of the fruit come out.