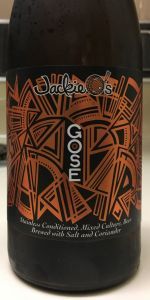 Classic pale straw color with great carbonation. It definitely features more of the coriander spice and less of the tartness you would expect from a traditional gose, which was a little disappointing. And beyond that it is rather anonymous, but it is overall a good beer.

Lighter in taste, but I'm still getting some filling lactic acid, with shaved lemon ice, light wheat, and salt. It's less funky in taste, and lightly tart.

My oh my, that has the saltiest nose I can recall - it saturates the air as soon as you pop the cap. The beer pours almost like a mead or apple juice - it's not syrupy, but it has some body and thickness to it. There isn't much head, but the carbonation is sharp and quite present.

The taste is my favorite thing about this beer. The salt is present, but is felt more in the nose than on the tongue. It tastes a bit like green apples - sour, with a little pucker and tartness, but not overwhelming.

Well done and accurate to style - quite a good beer.

16.9oz bottle courtesy of WesMantooth. No freshness date that I can see.

Poured into a shaker pint glass, this was a clear shade of pale gold, with a modest eggshell white head that was mostly gone after a couple minutes.

Salty, briny aroma, with a little bit of spiciness and some funk.

The spices are in the driver's seat, with the salt and coriander a bit sharper than in other goses I've had. According to the label, brett, sacc and lacto were all utilized here, but it seems not with a heavy hand. It's like a funk shadow is cast over the beer, if that makes any sense.

Carbonation seemed a little low. Light bodied enough that it's not a great sin, however.

Perhaps not as refreshing as some goses I've had (at 5.2% alcohol, I think it's the biggest one I've had), but it's probably more complex than any other I've had. A gose for adults would be a good way of putting it. Using brett, sac and lacto, there's a more overtly funky thing happening here than I think is generally the case with the style, which admittedly I am no expert on, except I like them. It might not be my first choice of the style on a broiling hot eastern Washington summer day, but I'd still buy it if it were available, locally. Thanks, Corey!

500 ml bottle, 2016 vintage (I believe it was a November or December release). Served in a Ritterguts gose glass, the beer pours a mostly clear gold color with a couple inch white head. Head retention is good, and there's a small amount of lacing. Aroma is nice, the brew smells like coriander, salt, and wheat/grainy malt. Taste is similar to the aroma, but there's the addition of some lemon, lime and citrus peel. Mouthfeel/body is light, it's smooth and easy to drink with a decent amount of carbonation. Probably a better spring/summer beer for me, but then it's pretty warm for January here today (upper 50's F) so I can't complain. Certainly worth picking up this brew, I know I'd buy this again! $7.99 a bottle.

Reviewed from notes. Poured from a 16.9 oz. bottle into an El Catador teku glass.

A: Crystal clear, bright light gold - until the last dregs of the bottle poured in, then becomes modestly cloudy. Forms a finger's worth of white fluffy head that fades quickly, with lots of visible carbonation. Very nice-looking.

T: Lactic tartness, cracker malts, and sea salt. Lemons and lemon zest, with mild pilsner maltiness in the middle. A very mild but present Lactobacillus funk suggests that this wasn’t just a lactic acid addition - but the funk isn't a large part of the flavors. More tart salinity at the swallow.

O: Ummm…this was fine. It straddles the middle of the road for style. As long as you keep your expectations tempered, this won’t offend anyone. But that likely its biggest weakness as well - just not memorable.

Poured from a recently purchased bottle dated 2017, into the test glass.
A - Golden and clear, excellent carbonation tops out with a thin pure white cap. At first glance the is perfect pilsner in visual.
S - That mixed culture is up front in a good way, Summer grains and lemon grass, some citrus rine , and a bit of coriander.
T - Wheat ale for sure, hints of coriander, a very nice citrus thread, and cheese rine in ash, again in the best way.
M - Lite in body, the carbonation almost tickles, a bit sour, not overbearing in that department,the saltiness is delicate. Dry finish and the faintest linger of spice. The palate response is toward the dry side,
O - A deftly crafted offering, I like the stainless conditioning, very clean in every aspect. The salt and spice are integral and not overbearing. Exceptional mouth feel and finish.
A delight

L: Poured from a bottle to a cylinder glass. Had a golden yellow color and a clear consistency. There was a half inch of foamy / fizzy head that quickly dissipated. Average lacing.

S: A pretty good aroma of wheat, sea salt, coriander, and some yeast.

T: Tasted of a fair shot of sea salt, a lot of wheat, some yeast (more than expected for this style), a good deal of coriander, light fruit (lemons, in particular), and a light biscuity quality. An interesting flavor with the inclusion of the yeast. Didn't like it at first, but it grew on me. Sweet and light.

F: A highly carbonated beer with a zesty finish. Light-bodied.

O: I won't say that this is my favorite gose, but it is very likable. Definitely drinkable.

Poured from the bottle into a wheat ale glass.

Beaming, shiny, and a ridiculously crystal clear body color that looks like shiny polished brass. Brass deep yellow, with light amounts of floating fast and small carbonation. Head creation is a solid and even three fingers, mixing a bright white and faint soapy head. Some minor retention, as it simply and slowly settles to a thin but good solid puck.

Palate makes a real nice match. Faint tart qualities on first sip, but lots of mineral and earthy like flavors. Chewy but lots of mineral mouthfeel cut through much of the wheat malt quality and density. Excellent bready bakery finish and dough, with touches of rock salt and salinity. A bit of carbonated and gaseous flavors make a slight appearance unfortunately but don't ruin the tasting experience. Good touching fruit characters that range from lemon to cherry in a simple tartness.

This beer pours a brilliant golden color and is topped with less than an inch of off white head that leaves minimal lacing.

The smell is tart and funky.

The taste is sour and funky. The salt is apparent through the middle. The finish is dry.

This beer drinks more like a sour to me than a gose. I love it. I love the funk and sour profile.