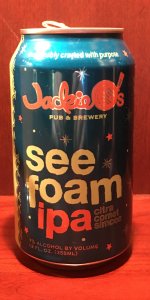 Purchased as a six-pack from a Marathon for $11.99. Poured into a nonic pint glass.

L - Hazy goldenrod. One-finger frothy alabaster head.
S - Pineapple-forward for sure. Citrus, pine, and a multitude of herbal notes. A far-away hint of wheat.
T - Juicy. Pineapple, passion fruit, guava. A bit of jackfruit is present. An underlying malty presence is here, but hard to find. Bitter, but not over-the-top. Tart citron peel aftertaste.
F - Refreshing, yet on the stronger side. Lightly carbonated. Light on the palate, but full-bodied.
O - A wonderful beer for a backyard BBQ. A fruity, but not overwhelmingly fruity IPA. The bitterness of the well-selected hop combination makes the drinker aware of its presence, but doesn't overpower the malt. A well-rounded IPA that fans of the style would surely appreciate.

As I am new to beer tasting, I am new to excitement. Picked a 6 pack up from a local mart. Truly a wonder. This beer is not only appealing in its name, packaging, and feel. But it tastes like an IPA willing to go the extra mile. Smooth, hoppy, citrisy, and delicious. An ohio IPA waiting for people to tase. Truly a wonder, with such great packaging, they had to have tried this beer before thinking up the look!

S: Dank, oily, piney... Stonefruit? That fruity tropical smell that NE IPAs tend to have is present here as well.

T: Tastes like Jackie-Os, but juicer and smoother than normal. It's spot on for the style and pretty good overall.

O: Excellent. I would recommend this.

Wow-I wasn’t expecting this. Very juicy citrus with a slightly bitter finish. Does this have any alcohol in it? Super crushable and easy drinking. Glad I finally pulled the trigger on this one. Will definitely be revisiting soon.

12 oz can into IPA glass. Dated 10/15/19.
Look is nice cloudy yellow-orange. Smell is sweet orange. Taste follows with a little tart/bitterness at end. Feel is light. Overall a drinkable beer but not great.

Outstanding brew, this kicks ass. Pours a hazy orange color with full head. A high end citrus, fruit and hop aroma. The taste follows, a good combination of citrus and hops. A fairly light mouthfeel with an aftertaste that starts out fruity and ends with hop bitterness.

I brought a 6pck of this beer from my local meijer. It poured a hazy orangish with white head that is leaving a nice lace. The scent had very nice tropical fruit peel notes. The taste was nicely balanced and easy to drink with ripe tropical fruit presence. The mouthfeel was medium in body with good carbonation. Overall its a solid beer.

Don't think I've ever had any of Jackie O's IPAs, since I usually know them for their intriguing, off-the-wall wilds/strong ales and/or their very flavorful and intense stouts/dark beers. This and Mystic Mama just showed up in my local store with about a month on each of them, however, which seems fairly fresh to me. See Foam IPA features Citra/Simcoe/Comet hops, an intriguing blend with a seemingly very pine/citrus/grapefruit-forward bent to it just by what I know about each of these individual hops alone. Excited to see them come together.

The pour is surprisingly pretty much opaque-orange (don't know why I was expecting it to be clearer, guess I didn't realize it was categorized as an NEIPA here) with a nice, fluffy, dominating head of pure-white foam that builds up to two fingers before slowly cascading down to approximately one finger. Great legs as it dissipates, leaving behind similarly-great lacing. Extremely attractive pour. I'm into it already!

The nose is fresh-squeezed grapefruit juice with slight notes of tangerine, orange marmalade, pine resin, sticky grassiness, damp earth, and dankness. Maybe a tiny hint of pineapple/guava in there as well? Super saturated... I'm very impressed at how much is going on here, yet it all remains cohesive. Makes sense given the well-thought-out hop bill, I guess, as I mentioned above, but I'm still happy to see them play nice together.

Immediately very tangy and bitter on the tongue, though that sentiment becomes juicier toward the mid-palate as the malt comes into play. Flavors of grapefruit peel, orange juice, tangerine, mango, guava, and pineapple meld with some nice dankness and even a touch of spice toward the finish. Aggressive bitterness once again hits around that area, though there's a quick switch up that fakes some more juiciness and pineapple-like flavors with some grassy notes that I very much like. Sort of a parting gift in each sip. Great mouthfeel; deft and well-balanced when it needs to be, but also very hoppy and juicy at times as well. Thick and dense with hops, good carbonation, and solid flavors all come together to make for an excellent, complex NEIPA. I find this kind of similar to some Relic beers I've had. It's a little more aggressive/astringent/drying than, say, Toppling Goliath, and has somewhat of a rougher bearing to it, but it's also something I'd like to have again, for sure. Looking forward to reviewing the other new JO's IPA I picked up!

Pleasant citrus smell with a mild mild citrus taste. Bubble feel on the tongue. Virtually no after taste or bitterness. No head as presented on tap. Very opaque with orange line color.

5 oz pour on tap. This is a solid juicy NEIPA with plenty of citrus and tropical fruit aroma. Moderate bitterness. Mouthfeel is well-carbonated and not as soft/pillowy as would be ideal. Overall, a slightly above average NEIPA.

12oz can into a tulip