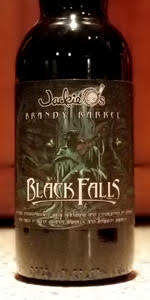 Notes: A continuation of the first collaboration between Burial and Jackie O’s, Brandy Barrel Black Falls is the barrel-aged, high gravity iteration of an idea formed years ago. Brewed with North Carolina rye and Athens County spicebush berries, this Imperial Baltic Porter was laid to rest in apple brandy and bourbon barrels for 17 months, then conditioned on vanilla beans. After completing its journey, Brandy Barrel Black Falls exudes flavors of rich oak, deep caramel, rye spice, and wafts of sweet brandy.
View: Beers | Place Reviews
Reviews: 18 | Ratings: 46 | Log in to view all ratings and sort

12.7 oz bottle, vintage 2019, poured into a snifter at 55 degrees F:
L - deep dark with a head that lingered around the edges
S - malt, coffee, molasses, brandy
T - malt on the nose with an apple brandy sweetness on the finish
F - thick mouthfeel with minimal carbonation
O - great beer, flavors are so well blended

Solid chocolate, bourbon. The brandy heat is there on the backend. Decent balance. Not much vanilla to be found. Medium body, solid carbonation making for a smooth, mildly hot backend.

Poured from the 12.7 oz bottle, 2019 version into the test glass
A - Deep dark brown, hides all the secrets, gentle carbonation, very little cap. Soapy lacing
S - Vanilla, some barrel tannin, licorice, honey, dark fruits. Fig, wrapped in dark chocolate
T - Elements of bourbon, some dark fruit again, candied dark fruit. Hint of tobacco. A spicey black pepper thread, and a soft vanilla backbone.
M - Oily, in a good way. sweet with a medium body. linger is complexwants to be dry but cant get there.
O - A very good barrel offering. So many layers in this. Worth seeking out

Medium black, brown tinting when help up to light, thin brown ring. Huge caramel, brandy, plenty of my new favorite beer term: vanillins, bourbon, rye, and licorice. Wow, so the taste builds on the nose with a french toast start before the berries and general dark fruit wash over it all, then finishing with a tide of smoky rye, vanilla, and booze. Starts wet and gets dry. Feel is sweeter, boozy, and velvet smooth. Drinks lighter than it is. Is this the height of craft baltic porter?

This is a gem. Well developed and expressive aromas and- especially, flavors. The vanilla and rye stand out, and the brandy barrels are the icing on the cake. Really enjoyable. Hope they make this again.

Primarily Baltic character--light iodine and peat--alongside vanilla on the nose. The brandy notes come through loud and clear on the palate, however, with some bright fruit and substantial boozy oak balanced out by the vanilla. I would love to try the base beer for this, though.

M - Thick and silky with slight warming on the way down.

Description: Glassy, jet black appearance with minimal head. Smell is sort of sweet-tart (not the candy, just the general aroma) with notes of dark fruit, sour cherry and, of course, brandy. Taste in similar as far as being sweet and tart with the added touch of vanilla and more wood/oak from the barrels. For a 13.5% ABV, it isn't too hot and the alcohol doesn't overwhelm it. Feel is more carbonated than might be normal for a porter but not by much. Same with the body: a little light but not outside the norm.

Overall: 4.25 (This beer is good and I would likely drink it again) As with most of Jackie O's dark beers, this is well made and a nice beer to sip on. The brandy was a nice change from bourbon barrel aging and added an appropriate amount of sweetness to the beer. That being said, $11.99/bottle (like all of JO's barrel-aged beers) is a little steep for this and I'd probably pass due to the pricing as opposed to the actual quality of the beer. So, if someone else buys you one, go for it!

An even pour yielded a small khaki head; minimal lace.

A bit thin for all this flavor, and the finish wasn't ideal for me. Not terrible but not great, either.

Appearance: Very dark brown on the pour, but black in the glass. Tan head died back to a tiny wisp at the ring of the glass. No persistent lacing as you would expect at a high ABV.

Overall / Drinkability: What an amazing beer - I've never had anything quite like it and it's quite enjoyable. Dangerously drinkable - I would not mind another glass but I would be hurting if I did. A definite slow sipping treat of a beer.

A draft at Jackie O’s.

Smell- Everything I expected was there. Vanilla, chocolate, caramel, and most impressively huge amounts of brandy and bourbon.

Taste- The flavor follows the smell. The vanilla really sets this one apart. The brandy and bourbon mix is phenomenal with no alcohol burn.

Mouthfeel- Light carbonation with a creamy feel. Never realized this was over 13% abv.

Overall- One of the best porters I’ve had. The brandy and vanilla put it at the next level.

12.7 ounce bottle, 2019 vintage. Served in a Jackie O's snifter, the beer pours dark brown/black with about an inch tan head that didn't stick around for too long. There's a small amount of lacing. The brew smells like roasted malt, vanilla, brandy, fudge, caramel, oak and some spicy rye. For the most part I think the taste is pretty much just like the aroma, but there's also the addition of some dark fruit, bourbon, brown sugar and an earthy/spicy flavor (which I'm guessing is the Spicebush?) that's also noticeable. Mouthfeel/body is full, it's creamy and a bit coating with a moderate amount of carbonation. 13.5% ABV? Sure doesn't seem that way, the alcohol is well hidden here although I'm sure it'll catch up to me later. I liked this a lot, it's definitely worth picking up. I know I'd like to get another bottle or 2!

A - Poured into a Kate the Great tulip a nice dark brown almost black with a thin off white head that fades to leave light lacing and thin wisps.

T - Taste is similar to the nose with loads of slightly sweet caramel sauce. Tons of chocolate and coconut with excellent bourbon and slightly sweet brandy. Little bit of dark fruits and faint spices, great vanilla. No alcohol burn or heat.

Mouth is fuller rich bodied, chewy like but creamy smooth, medium carb and some warming alcohol but drinks much less

Overall very very nice, could have a bit more of the spices but otherwise great imperial porter and vanilla with great barrel notes too

I saw this in the grocery store and went "hmmmm". Despite some past infection snafus, when I see Jackie O's and barrel aged, I'm pretty much hooked. Then I saw "Baltic Porter" and the hook was firmly set. And then a collab with Burial, I thought "isn't that the brewery in Asheville where all the denizens that lost it when Wicked Weed sold out said was better anyway?" Why yes it is!

So I'm thoroughly enjoying this and have to finish this write up so I can get offline and read and listen to music. There was almost no head when I poured it into a tulip so I nicked it for that aesthetic meaningless point. Otherwise just magnificently boozy vanilla smells and tastes along with other scents and flavors. I'll have to pick up another one of these to savor by itself on a crisp fall evening.

Purchased in 12.7 ounce bottle and poured into snifter. Pours dark brown with minimal head. Nice aroma overall. Quite boozey. Decent beer overall, but would not purchase again as this bottle was $12.